Barcelona will aim to continue the recent winning run when they welcome Getafe to Spotify Camp Nou on Sunday.

Matchday 18 of the 2022/23 La Liga season will continue on Sunday, with four games on show on the day. League leaders Barcelona will be in action in the penultimate fixture as they lock horns with Getafe at Spotify Camp Nou.

The 2022/23 season has been bizarre from the perspective of FC Barcelona. While the Catalan giants have been imperious in domestic football, they were dreadful in Europe. The Blaugrana went out of the UEFA Champions League in the group stage. But Xavi Hernandez’s men have barely dropped points in La Liga while winning Supercopa de Espana last weekend.

For Getafe, the 2022/23 season has been frustrating thus far. Quique Sanchez Flores’s men are perilously close to the relegation zone, with 18th-placed Cadiz just a point behind them. The Azulones are also out of Copa del Rey, with Levante dumping them in the Round of 32. Recent form does not favour Getafe either, as they have won only one of their last five games.

The corresponding fixture last season saw Barcelona eke out a 2-1 win over Getafe, with Memphis Depay, now at Atletico Madrid, scoring the winner. The Hard Tackle takes a closer look at the encounter ahead of the latest meeting between the two sides.

Xavi Hernandez has a couple of roster issues hampering his preparations ahead of the game against Getafe. On Sunday, the Barcelona manager will be bereft of the services of two first-team players due to suspension.

Robert Lewandowski and Ferran Torres will miss the next two games as they serve their respective bans. But Xavi has an otherwise full-strength squad at his disposal this weekend, with all the regular starters set to return.

Marc-Andre ter Stegen picks himself between the sticks, with Barcelona lining up in a 4-3-3 formation in front of him. Xavi has preferred using a centre-back as a makeshift right-back this season, despite the presence of Hector Bellerin. And that will unlikely change on Sunday.

So Ronald Araujo should start as the right-back, with Jules Kounde and Andreas Christensen pairing up at the heart of the defence. And Alejandro Balde will likely feature as the left-back ahead of Jordi Alba and Marcos Alonso.

Gavi has been phenomenal since the end of Spain’s FIFA World Cup 2022 campaign and will start in the middle of the park. The teenage sensation will line up alongside Frenkie de Jong and Pedri in the midfield unit on Sunday.

Meanwhile, the absence of Lewandowski and Torres and Depay’s departure means Xavi has no room to rotate. So Ansu Fati will likely spearhead the Barcelona attack against Getafe, with Ousmane Dembele and Raphinha starting as the two wide men. 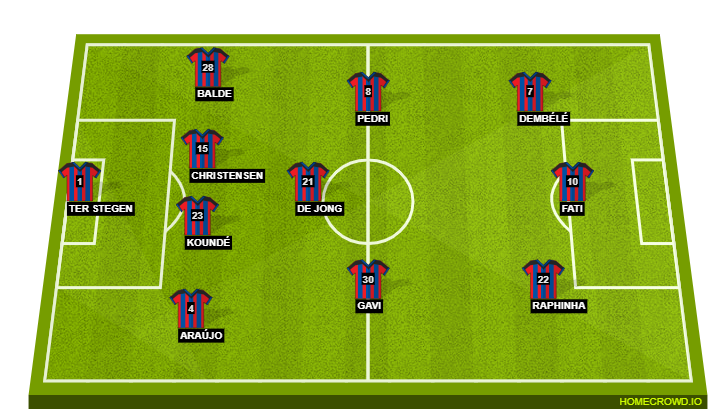 Unlike his counterpart in the Barcelona dugout, Quique Sanchez Flores barely has any concerns ahead of the trip to Spotify Camp Nou. The Getafe manager should have a fully-fit squad against Barcelona on Sunday.

Mauro Arambarri has been the only major doubt for Getafe due to an ankle injury. But the 27-year-old will likely be fit enough to make the bench this weekend. However, the midfield unit should feature Angel Algobia, Luis Milla, and former Barcelona midfielder Carles Alena.

The trio will primarily look to keep things tight in the middle of the park. But Alena will provide the forward thrust from the midfield whenever the opportunity presents for Getafe to take the game to Barcelona.

The visitors will line up in a 5-3-2 formation, with David Soria taking his spot between the sticks. Domingos Duarte, Omar Alderete, and captain Djene Dakonam will likely form the central defensive unit. And Juan Iglesias and Portu should be the two full-backs.

The wide duo will also provide the width in the final third in the few instances when Getafe can charge forward. Finally, the strike partnership should feature Borja Mayoral and Enes Unal, leaving former Barcelona striker Munir El Haddadi on the bench. 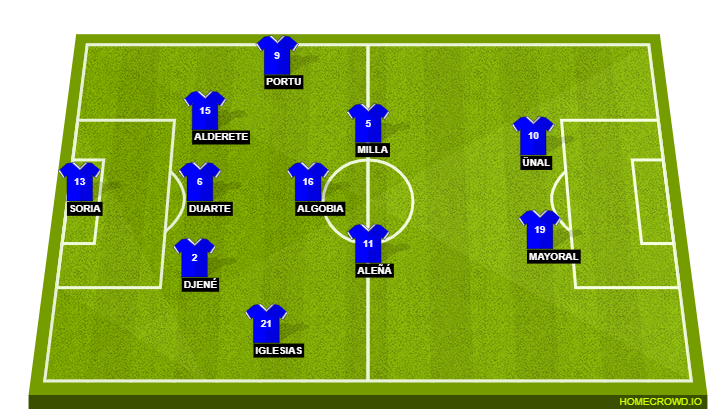 Xavi Hernandez is down to his barebones in the offensive unit, meaning the front trio picks itself. And Ansu Fati will have the opportunity to make his mark in the next two games in the absence of Robert Lewandowski and Ferran Torres. Xavi has grappled with the decision to seek an in-house replacement for Lewandowski.

With Torres suspended and Memphis Depay joining Atletico Madrid, Fati has two games to seal his spot. While Lewandowski will invariably take his place back, Fati can usurp Raphinha with two game-changing performances. So the match against Getafe will give the 20-year-old a golden opportunity to shine.

Despite Robert Lewandowski’s absence, the game on Sunday should be a procession. With Getafe yet to win a game at Spotify Camp Nou, the visitors might hope to give Barcelona a run for their money. But the Blaugrana will be too strong for the Azulones this weekend.

Quique Sanchez Flores has not won any of his last seven games against Barcelona in La Liga (D2 L5). And the poor run should continue for the Getafe boss, with Barcelona poised to cruise to a 2-0 victory at Camp Nou on Sunday.