Manchester United will host Real Sociedad in the UEFA Europa League opener on Thursday, looking to continue their impressive run with a home win.

After a disappointing start of the season, Manchester United have shown significant improvement and they are coming into this contest on the back of four consecutive wins across all competitions. In that time, Manchester United have beaten teams like Liverpool and Arsenal at home. They will be fairly confident of grinding out all three points against the Spanish outfit this week.

Meanwhile, Real Sociedad have been quite inconsistent in recent weeks, and they will need to improve in order to get something out of this contest. The Spanish outfit are coming into this game on the back of two wins from the last four matches, and it remains to be seen whether they can pull off an upset at Old Trafford.

These two sides have faced each other four times in the past, with Manchester United winning two of those clashes and the remaining ones ending in a draw. Real Sociedad will be searching for their first win over Manchester United in the UEFA competitions, but they are up against a resurgent side, and this is likely to be a difficult outing for the visitors.

Manchester United will look at the UEFA Europa League as a great opportunity of lifting a European trophy this season, and Erik ten Hag has the squad at his disposal to win the competition.

? Erik discussed the fitness of @AnthonyMartial and @Cristiano in today's press conference…#MUFC || #UEL

Manchester United will be without some of their best players due to injury problems, and Erik ten Hag is expected to rotate his squad to keep the players fresh for the upcoming fixtures. Striker Anthony Martial is sidelined with an injury along with Brandon Williams, Facundo Pellistri, Phil Jones and Axel Tuanzebe.

Cristiano Ronaldo looks set to be handed his second start of the campaign here. The 37-year-old has not been a regular starter for Manchester United this season and will hope to put on a top-class performance here if he is handed the opportunity.

Manchester United are the better team heading into this contest, and an attacking approach could thus be expected from them. Ten Hag is likely to start with a midfield pivot of Casemiro and Christian Eriksen. The likes of Antony, Jadon Sancho and Bruno Fernandes are expected to operate behind Cristiano Ronaldo, who is set to lead the line for the Red Devils. 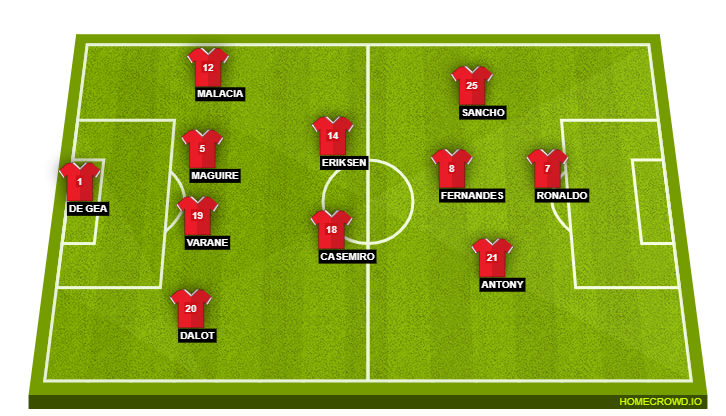 Real Sociedad are likely to be without the services of  Mikel Oyarzabal, Carlos Fernandez, Diego Rico, Martin Merquelanz and Robin Le Normand due to injuries.

Alex Remiro is expected to start in goal for the Spanish outfit, with Alex Sola, Aritz Elustondo, Andoni Gorosabel and Aihen Munoz comprising the back four against Manchester United.

Martin Zubimendi is expected to start as the defensive midfielder in a diamond, with Mikel Merino and Brais Mendez starting as the central midfielders. Former Manchester City captain David Silva will operate in the number ten role, with Umar Sadiq and Mohamed-Ali Cho forming the strike partnership for the visitors against Manchester United.

Cristiano Ronaldo is the player to watch for this game. The 37-year-old forward has struggled for regular game time this season, and he will be desperate to prove his worth to Erik ten Hag with a top-class performance here.

Ronaldo is one of the greatest goal scorers the game has seen, and he has an exceptional record in European competitions. He will look to put on a clinical display against Real Sociedad, hoping to get back in favour with the Manchester United boss.

Manchester United are undoubtedly the favourites heading into this contest, and they will be full of confidence and momentum right now. Meanwhile, Real Sociedad have been quite inconsistent, and they are up against a vastly superior opposition here.

Real Sociedad are unlikely to roll over and make things easy for the hosts, but they are well out of the depth and are likely to fall short in the end. A comfortable home win is definitely on the cards here, and The Hard Tackle predicts a 2-0 victory for the Red Devils.