Chelsea will be aiming to keep a stronghold of top spot on the Premier League table when they welcome Norwich City to Stamford Bridge on Saturday.

The 2021/22 Premier League season is moving into Gameweek 9 this weekend, with the latest round of fixtures beginning with a Friday night match between Arsenal and Aston Villa. The action on Saturday kicks off in the capital, as Chelsea play hosts to Norwich City at Stamford Bridge.

Chelsea have been in fine touch in the early stages of the 2021/22 season, with the only major blips coming in the form of back-to-back losses to Manchester City and Juventus. The Blues have not faced a defeat in any other fixture and after a hard-fought win over Brentford last weekend, they were much more comfortable in the 4-0 rout of Malmo FF in the UEFA Champions League.

For Norwich City, on the other hand, 2021/22 has been a season to forget so far. The Canaries have won just once in all competitions, with that success coming in their maiden outing in the Carabao Cup. As far as their Premier League campaign is concerned, Daniel Farke & co. have managed just two points in eight games, with those draws coming in their last two games, against Burnley and Brighton & Hove Albion.

Chelsea eked out a narrow 1-0 win over Norwich City the last time these two sides faced off against each other at Stamford Bridge, with Olivier Giroud scoring the only goal of the game. Ahead of the latest meeting between the two sides, The Hard Tackle takes a closer look at the encounter.

Join us as Thomas Tuchel looks ahead to tomorrow's game with Norwich City!? https://t.co/ouQrzab0fA

The big win over Malmo earlier this week came at a cost, as Thomas Tuchel has been handed a double blow on the team news front ahead of the visit of Norwich City. On Saturday, the Chelsea manager will be bereft of the services of three first-team players.

While Christian Pulisic remains unavailable due to his continued battle against an ankle injury, the USMNT international has been joined on the sidelines by fellow attackers Romelu Lukaku (ankle) and Timo Werner (hamstring), with the two strikers sustaining their injuries in the aforementioned game against Malmo.

With Tuchel left without a natural striker at his disposal, Kai Havertz becomes an automatic pick, with the German international set to lead the line for Chelsea against Norwich. The 22-year-old showed promising signs in his partnership with Callum Hudson-Odoi in the second half of the midweek fixture, meaning Hudson-Odoi ought to earn a recall as well.

The selection of Havertz and Hudson-Odoi should prompt Tuchel to shuffle his formation around a little, with Mason Mount playing higher up the pitch alongside the two recalled forwards. As far as the midfield double pivot is concerned, Ruben Loftus-Cheek and Mateo Kovacic should return, with the duo providing a solid presence in the middle of the park.

Out wide, the fit again Reece James should start as one of the two wing-backs, with Ben Chilwell lining up as the left wing-back once again. At the back, Andreas Christensen could be due a rest after playing a lot of games already this season. With that in mind, the three-man central defensive unit will likely comprise of Cesar Azpilicueta, Thiago Silva and Antonio Rudiger, with Edouard Mendy taking his place in goal. 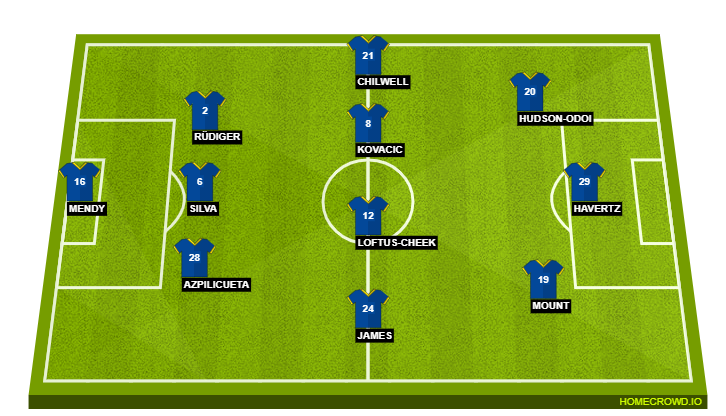 Like his counterpart in the Chelsea dugout, Daniel Farke has a fresh roster issue hampering his preparations ahead of the trip to Stamford Bridge. On Saturday, the Norwich City manager will have to make do without five first-team players, with Billy Gilmour being the fresh absentee, as he is ineligible to take on parent club Chelsea.

The likes of Sam Byram (thigh), Christoph Zimmermann (ankle) and Todd Cantwell (achilles) all remain out while Przemyslaw Placheta is lacking match fitness, meaning the visit to Chelsea will have come too soon for him for the Polish winger.

? DF: Todd has missed a lot of training sessions, so is not a topic for tomorrow.

There is a process until he will be ready for the battles on Premier League level.#NCFC | #CHENOR pic.twitter.com/ptxmmhEhEI

Norwich should line up in a similar formation, on paper, as Chelsea, with a 3-5-2 setup expected, with the subtle difference being that they will primarily remain pinned in a back five, with the wing-backs dropping deep to snuff out the space for Mason Mount & co. to work around.

In goal, there is no looking past Tim Krul and in front of the veteran goalkeeper, Ozan Kabak, Ben Gibson and captain Grant Hanley will form the three-man central defensive unit. As for the two wing-backs, Max Aarons and Dimitris Giannoulis pick themselves.

In the middle of the park, the onus will be on Kenny McLean to keep things tight, with the Scottish international receiving defensive support from Pierre Lees-Melou and Mathias Normann, who is fit to return to action this weekend.

The midfield trio will largely remain compact so as to create overloads in the middle of the park when off the ball. Finally, the strike partnership ought to be formed by Teemu Pukki and Josh Sargent, both of whom will largely feed off scraps against Chelsea on Saturday. 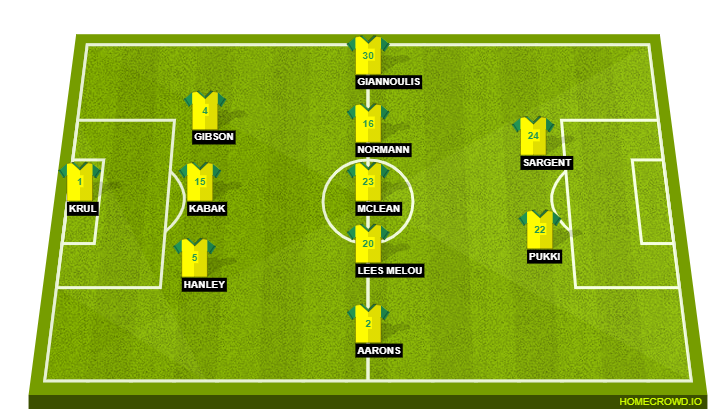 This might be the golden chance that Kai Havertz had been waiting for. Unfortunately for Chelsea, it has come when star striker Romelu Lukaku and the ever-improving Timo Werner are both on the sidelines with freshly picked up injuries, but the time is now for Havertz to finally nail down his spot in the side.

The German international joined Chelsea with a lot of excitement surrounding him. However, so far, he has been unable to continue on a similarly upwards trajectory as he was on when he was a Bayer Leverkusen talisman. However, with a run of games coming leading up to the international break next month, Havertz will hope to make his opportunities count, starting with the game versus Norwich City.

Chelsea might be missing two key attacking players in Romelu Lukaku and Timo Werner, but they are still too strong for a team like Norwich, who have largely been listless. Most importantly, the Blues will likely be entirely untroubled at the back, which will then set up the base for them to take the game to their visitors constantly, meaning a repeat of last week’s battle against Brentford can be avoided.

In such an endeavour, a few delightful openings should pave the way for three goals to be scored, with Kai Havertz and Callum Hudson-Odoi impressing once again. With that in mind, The Hard Tackle predicts a straightforward 3-0 win for Thomas Tuchel & co. in a result that ensures they will remain perched atop the Premier League table for another week.