Barcelona will be hoping to climb up the La Liga standings when they welcome Real Sociedad to Camp Nou on Wednesday.

The games continue to come thick and fast for teams across Europe, and La Liga is not far behind on that either. Barcelona will be in action on Wednesday night, when they play hosts to current table-toppers Real Sociedad at Camp Nou, hoping to cut the gap to the summit.

For Barcelona, 2020/21 has not been a far cry from their inconsistencies last term. The Blaugrana have managed to garner maximum points in less than half (5) of their 11 La Liga games thus far. Their UEFA Champions League group stage campaign ended on a whimper as well, as they finished runners-up in Group G, although they bounced back with a crucial 1-0 win over Levante last week.

Real Sociedad, on the other hand, have been the pacesetters in La Liga pretty much from the get-go and have constantly been in the upper echelons of the competition thus far. Taking advantage of the late start made by Real Madrid, Barcelona and Atletico Madrid, La Real have been the team to beat, losing just one of their 13 games till date.

The corresponding fixture last season saw Barcelona narrowly eke out a hard-fought 1-0 win over Real Sociedad, courtesy of a late penalty by Lionel Messi. Ahead of the latest meeting between the two sides, The Hard Tackle takes a closer look at the encounter.

Ronald Koeman does not have any fresh injury concerns hampering his preparations ahead of the visit of Real Sociedad. On Wednesday, the Barcelona manager will continue to be bereft of the services of four first-team players.

Sergi Roberto, Gerard Pique, Ansu Fati and Ousmane Dembele all continue to serve time on the sidelines, with none of the players expected to return before the turn of the year. Therefore, the choices for Koeman in three positions remain restricted for the most part.

In Roberto’s continued absence, Sergino Dest will continue as the right-back, while Ronald Araujo should continue deputising for Pique at the heart of the Barcelona defence, with Clement Lenglet being his partner. On the left flank, there is no looking past Jordi Alba, with Marc-Andre ter Stegen set to start in goal.

Up ahead in midfield, the Miralem Pjanic-Sergio Busquets rotation ought to continue, with the Bosnian expected to start ahead of Busquets this time around. Pjanic will have Frenkie de Jong for company in the double pivot, with the Dutchman looking to dictate play from the middle of the park.

In attack, the absence of Fati and Dembele has forced Koeman to utilise Philippe Coutinho and Pedri out wide and the latter should get the nod on the left flank. Antoine Griezmann will continue reprising his favoured no. 10 role, with Lionel Messi occupying the right-wing. Finally, the in-form Martin Braithwaite ought to lead the line for Barcelona against Real Sociedad. 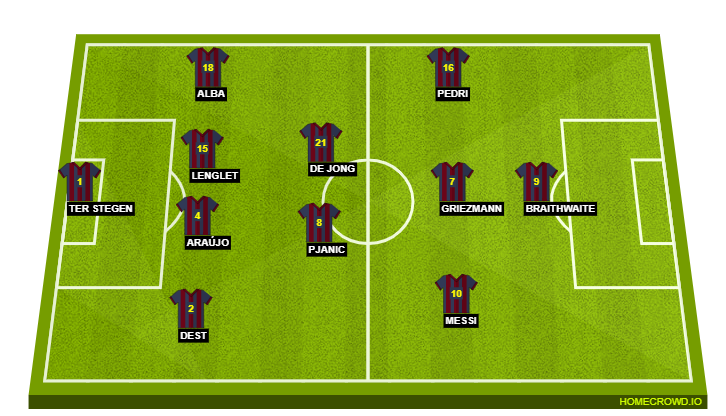 Much like his counterpart in the Barcelona dugout, Imanol Alguacil does not have many roster issues to contend with ahead of his side’s latest fixture. On Wednesday, the Real Sociedad boss will have to make do without as many as five first-team players, with Miguel Angel Moya, Jon Guridi, Luca Sangalli and captain Asier Illarramendi all certainties to miss out.

Mikel Oyarzabal might continue to be unavailable as well, as he nurses a muscle injury. However, David Silva will hope to be back in the starting lineup after making an appearance off the bench last time out against Eibar. In fact, Alguacil is expected to make some heavy rotations in order to not just keep his troops fresh but also get his strongest possible side on the pitch.

In goal, there is no looking past Alex Remiro, especially in the absence of Moya. In front of him, Real Sociedad will line up in a 4-2-3-1 formation that mirrors Barcelona’s setup on paper but will be played out much differently.

Robin Le Normand and Modibo Sagnan are likely to retain their spots at the heart of the Real Sociedad defence, but there should be changes in the full-back positions. Andoni Gorosabel and Nacho Monreal should be recalled, with Joseba Zaldua and Aihen Munoz making way.

Up ahead in midfield, the impressive Mikel Merino will have the task of keeping a lid on Lionel Messi and Antoine Griezmann’s output. Merino will likely have Martin Zubimendi as his partner in the double pivot, with the 21-year-old in-charge of ensuring smooth transitions. David Silva should reprise the no. 10 role in the offensive phases but will form a midfield three off the ball.

Willian Jose should get the nod over Alexander Isak to lead the line for Real Sociedad against Barcelona, with Portu and Adnan Januzaj likely to start as the two wide men. Ander Barrenetxea, though, could get another start on the right-wing too, following his goal against Eibar last time out. 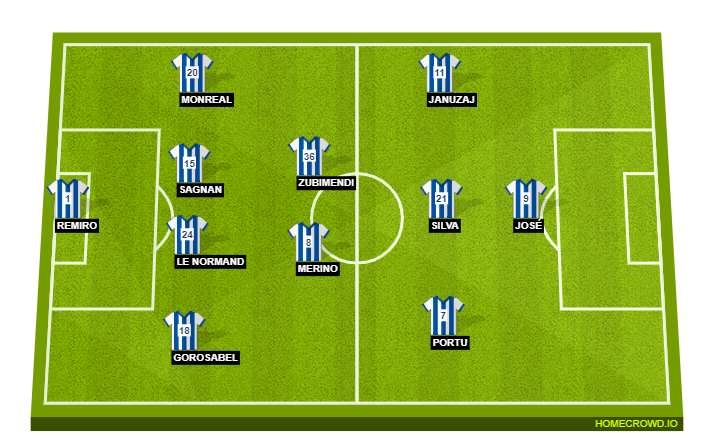 In a game featuring some of the best creative players on show in La Liga, the midfield battle will invariably hold the key. While all eyes will undoubtedly be on Lionel Messi and David Silva, Frenkie de Jong’s output from the middle of the park will be critical for Barcelona.

The Dutchman has not always been in full flow this term. But, against one of the best teams in La Liga this season, de Jong will need to be on the money and bypass what will be a robust midfield setup by Real Sociedad. One of the most important games of the season for young de Jong.

This is a game between two sides that would not have expected to find themselves in positions they are in currently in La Liga’s standings. Having said that, Real Sociedad will surely fancy their chances against a Barcelona side that has not quite been at their best till date in 2020/21.

La Real, though, have struggled to kill off games and have been drawing too many games lately. Atletico Madrid’s loss to Real Madrid surely helped them, but they cannot afford dropping points once again this week. Having said that, Barcelona at Camp Nou is still a daunting fixture and the sheer influence of Lionel Messi will surely be telling.

Expect another inspired performance by Real Sociedad, but it should be another one of those ties that they are unable to end with all three points. To that end, The Hard Tackle predicts a 1-1 draw, with Barcelona’s unbeaten run against La Real continuing, albeit with an unfavourable result.