It is a clash of the titans in this weekend’s marquee Premier League clash as Manchester United host Manchester City at Old Trafford on Saturday.

Premier League action resumes this weekend with Gameweek 12 of the 2020/21 season. The big game this weekend comes from Old Trafford, where Manchester United will play hosts to neighbours Manchester City on Saturday evening,

Manchester United have recovered well from a wobbly start to their Premier League campaign, winning each of their last four games to climb up to 6th on the table heading into this gameweek, just five points off of leaders Tottenham Hotspur with a game in hand. However, the Red Devils come into this game on the back of a disastrous 3-2 defeat to RB Leipzig that ended their UEFA Champions League campaign.

Manchester City, on the other hand, have confidently coasted through to the Champions League Round of 16, but have been inconsistent in the Premier League, where they are a point behind local rivals Manchester United. Pep Guardiola & co. have managed to win just two of their last four games, but have been much improved in their last couple of outings.

The corresponding fixture last season saw Manchester United grab an impressive 2-0 win over Manchester City, with Anthony Martial and Scott McTominay on target. Ahead of the latest meeting between the two sides, The Hard Tackle takes a closer look at the encounter.

Ole Gunnar Solskjaer does not have any fresh injury concerns hampering his preparations ahead of the visit of Manchester City. On Saturday, the Manchester United manager might be bereft of the services of just one first-team player, with Edinson Cavani facing a race against time to make himself available for the fixture.

However, in some good news, Anthony Martial is back at Solskjaer’s disposal, while Fred is available as well after being suspended for the midweek European fixture. Both Fred and Martial should be back in the starting lineup straight away, with the latter’s spot in the eleven determined by the availability of Cavani.

Solskjaer should also revert to his trusted 4-2-3-1 formation after the disastrous 3-4-1-2 experiment earlier this week. David de Gea will once again be stationed in the Manchester United goal, with Alex Telles the defender who drops out of the side as a result of the switch in the system.

That means Luke Shaw will start as the left-back versus Manchester City, with Aaron Wan-Bissaka, who was calamitous against RB Leipzig, starting on the right. At the heart of the Manchester United defence, Victor Lindelof will pair up with captain Harry Maguire.

Up ahead in midfield, Fred will likely have Scott McTominay for company, with the duo tasked with harrying the Manchester City midfielders off the ball during their build-up play. Meanwhile, the remainder of the side picks itself, with Bruno Fernandes reprising the no. 10 role yet again while Marcus Rashford and Mason Greenwood will be the two wide men. 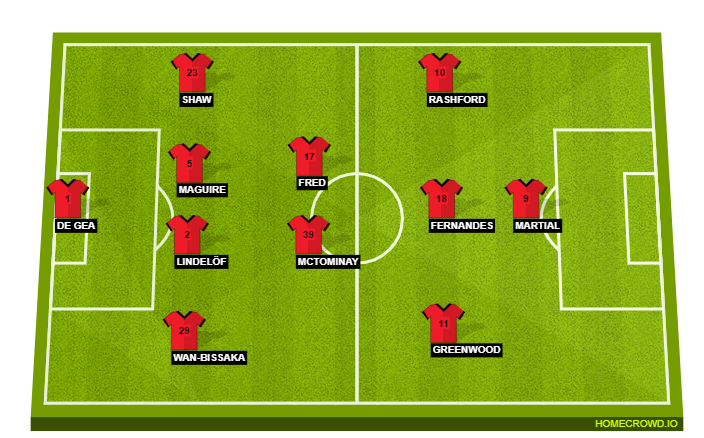 Unlike his counterpart in the Manchester United dugout, Pep Guardiola has a couple of fresh fitness troubles to contend with ahead of his side’s short trip to Old Trafford. On Saturday, the Manchester City boss could have to make do without a couple of first-team players.

Ilkay Gundogan is a minor doubt after picking up a knock in the game against Marseille earlier this week, although he is expected to be available after training on Friday. However, Eric Garcia is definitely out after sustaining a leg injury in the same fixture.

John Stones, whose future at Manchester City remains uncertain, has impressed in the last two Premier League games and might have done enough to warrant a start against Manchester United. The English international will be Ruben Dias’s central defensive partner, with Kyle Walker and Benjamin Mendy being the full-back pairing.

Up ahead in midfield, the key man for Manchester City will invariably be Kevin De Bruyne, who will look to pull the strings from the middle of the park and look to exploit the holes in the Manchester United defence. Rodri will play the Anchor Man role, with Phil Foden likely to be given the nod as the third man in midfield.

Finally, in attack, Gabriel Jesus, Raheem Sterling and Riyad Mahrez pick themselves, especially with Sergio Aguero still building his fitness and sharpness up. Jesus will lead the line for Manchester City against Manchester United, with Sterling and Mahrez being the two wide men. Sterling will aim to create overloads centrally while Mahrez will be more creative than a goalscoring threat. 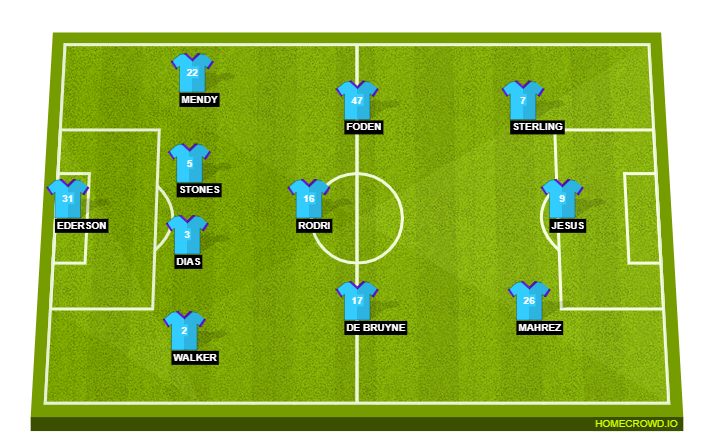 In a heavyweight clash such as the Manchester Derby, there are plenty of players worth keeping an eye on. However, at the end of a forgettable week for Manchester United, it is Bruno Fernandes, whose performance will go a long way in determining the final outcome.

On his day, the Portuguese international can win a game on his own, even against the biggest of opposition. Bruno Fernandes will need to be on top of his own game versus Manchester City this Saturday when his credentials as a match-winner will be put to the test. Will Fernandes deliver the goods for the umpteenth time?

This is one of those games that are too close to call. Manchester United were a mess at the back this week versus RB Leipzig, but a switch in formation and the return of Fred should see them shoring up the defensive side of things. Manchester City, too, have improved defensively and will likely keep things tight at the back.

Having said that, if there is someone who has had the number of Pep Guardiola of late, it is Ole Gunnar Solskjaer. The Manchester United boss will invariably fancy his team’s chances again, while also hoping for a response following the European disaster.

In the end, this will likely be a game of fine margins, with the scales tipping in favour of Manchester United ever so slightly. The Hard Tackle, therefore, predicts a Bruno Fernandes-inspired United to narrowly eke out a 2-1 win over Manchester City this weekend.