Pep Guardiola will face a tricky test in his first away game of the Premier League as Manchester City gear up for a tough outing at Stoke on Saturday.

Stoke City have started their campaign with a draw to newly promoted Middlesbrough. Even though Mark Hughes would not have been happy with the result, the club would be relieved to have managed to avoid a defeat in the season opener. Hughes would look to secure a first win of the season against Manchester City, with the Citizens yet to fully adapt to Guardiola’s tactics.

Manchester City, on the other hand, came out on top of a nervy battle against Sunderland at Etihad to register Pep Guardiola’s first win as City manager, but the performance was unconvincing in the match. The players, though, seemed to have picked up some of the slack as they executed a flawless performance against Steaua Bucharest in the first leg of the Champions League qualification phase, which should give the team some confidence ahead of the tie at the Bet365 Stadium. Guardiola would be looking to make it two wins out of two as he prepares his team for the match against Hughes’ men.

Stoke City would be without their star goalkeeper Jack Butland as the England international is sidelined with an ankle injury. This is likely to mean another start between the posts for 40-year-old veteran Shay Given. Former Liverpool defender Glen Johnson is also unavailable due to an injury to his quadriceps, giving more selection headaches to Mark Hughes.

Midfield stalwarts Stephen Ireland and Ibrahim Afellay are also out with a broken leg and a knee problem respectively, which is likely to mean a first start for new signing Joe Allen, who arrives from Liverpool after a stellar Euro 2016 campaign.

Xherdan Shaqiri is doubtful with a persisting ankle problem which he sustained in the pre-season, and will be assessed before the match. Mark Hughes, though, confirmed that fellow attacker Marko Arnautovic is fine and available for selection despite suffering a thigh injury.

Stoke City’s name is almost synonymous with a physical and direct brand of football for most fans. But Mark Hughes’ reign has brought a bit of class, edge and style to the Bet365 stadium. The Potters are now seen as a possession-based team that focuses on building up play rather than the regular hoofing it into the box for their attackers. Still, Hughes has a knack of going back to the old routine during the matches to bring some versatility into the playing style at the club.

Stoke play a slightly deep back-line, with the full-backs marauding forward on a regular basis while the central midfielders fill the empty slots. Their pressing game has become better under Mark Hughes, who seems to implement pressing inside Stoke’s own half but has, on occasions, opted for full-pitch pressing.

Hughes has assembled an attacking unit worth envying with stars like Xherdan Shaqiri, Bojan Krkic and Marko Arnautovic headlining their forward line. The trio is usually given comparatively larger creative freedom than their teammates, and most of the attacking moves are channeled through the trio. 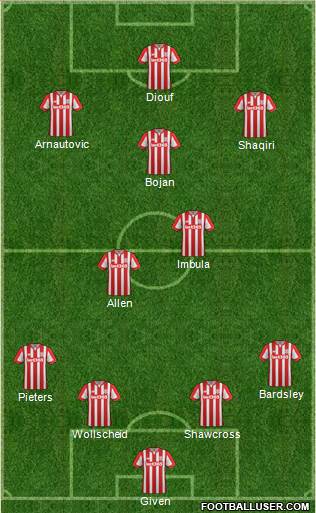 If Shaqiri ends up being not available for selection, Mark Hughes would look towards new signing Ramadan Sobhi to announce himself to the Premier League.

Pep Guardiola is likely to prefer Willy Caballero to Joe Hart. The England international will be considering his future prospects, with Everton interested in the 29-year-old. Defensively, captain Kompany continues to be unavailable for selection for another game due to injury as it looks like Kolarov might well partner John Stones at the heart of the defence, an experiment which almost cost Guardiola against Sunderland.

Yaya Toure could be set for another snub as Pep Guardiola begins to pick his first-team squad at Etihad. Elsewhere, new signings Ilkay Gundogan and Leroy Sane have both returned to training but the fixture at Bet365 could come too early for the duo. With the current form of Raheem Sterling, Pep would rather prefer the English international to continue for the time being.

Fernandinho was a key figure in the buildup play against Sunderland and the Brazilian is most likely to partner David Silva at the centre of the midfield. Elsewhere, Jesus Navas had a positive impact, registering an assist after being brought on by Guardiola, and the Spanish manager might just prefer to start Navas over Nolito.

In the two matches witnessed under Pep Guardiola, Manchester City’s playing style seemed a bit different in them. While the squad did not seem to be on the same wavelength, and the buildup play being slow and untidy, against Sunderland, the Citizens absolutely demolished Steaua Bucharest, producing an almost flawless display.

What is a given from the little Guardiola has shown until now is that there would be a lot of passing involved in the build-up play, with the main focus being on moving the ball forward along with protecting possession. It seems that the former Bayern manager has given Sterling the direction to stick to the wings on most occasions and touch the byline in attempts to cross the ball for his forwards with some creative freedom given in and around the box; something which has seemed to work for the England international.

Defensively, the team still looks like its old fragile self and Guardiola would need to address the problems in defence quickly if the Spaniard hopes of a victory at the Bet365. 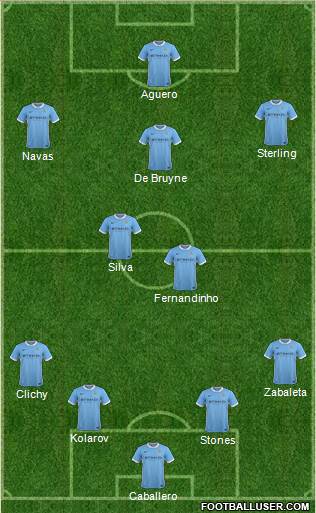 1. Stoke have won two of their last four meetings against Manchester City, after winning just one of the previous 12 games against the Citizens.

2. Sergio Aguero has six goals in six outings against Stoke in the Premier League.

3. Peter Crouch has managed to score in three out of his four Premier League appearances against Manchester City.

4. Former Manchester City boss Mark Hughes has faced his former side on 10 occasions in the Premier League, winning 2, drawing 2 and losing six of them.

Manchester City’s defence is still very shaky and if Guardiola chooses to play Kolarov alongside Stones, the Citizens are unlikely to keep a clean sheet. They could very well lose the game as Stoke City are likely to be better equipped at exploiting the shaky defence than Sunderland. But, City’s attack would come to the rescue, as has been the case on so many previous occasions. Sergio Aguero has shown that he is in form, and along with the resurgence of the Raheem Sterling of old, the attack would very well compensate the frailties in the defence. Mark Hughes’ Stoke, though, have shown in the past that they are not afraid of any of the Premier League teams and could be in line to cause an upset at the Bet365 stadium. They are considerably likely to come out with at least a point to show for their efforts.