Olivier Giroud should start again while Hakim Ziyech and N’Golo Kante will be among those to return when Chelsea host Leeds United at Stamford Bridge.

Chelsea will be eager to extend their unbeaten run across all competitions when they play hosts to Leeds United at Stamford Bridge on Saturday night. And, Frank Lampard has a fully fit squad at his disposal ahead of his side’s latest fixture.

Billy Gilmour is continuing to build his sharpness and will once again hope to secure some minutes off the bench. Lampard, though, is expected to name a strong lineup when Leeds pay Chelsea a visit on Saturday, meaning wholesale changes should be made once again.

There is unlikely to be a shuffle in goal, though, with Edouard Mendy a certainty between the sticks. In front of him, the four-man defensive unit will likely be reverted to the one that took the field versus Tottenham Hotspur last weekend.

Thiago Silva and Kurt Zouma will, therefore, pair up at the heart of the Chelsea defence, replacing Antonio Rudiger and Andreas Christensen. Ben Chilwell and Reece James ought to be the two full-backs, with Emerson Palmieri and captain Cesar Azpilicueta making way.

Up ahead in midfield, N’Golo Kante is expected to be recalled and reinstated at the base of the three-man unit. Mason Mount should be back as well, coming in for Kai Havertz in the middle of the park. The tireless Mateo Kovacic, though, will be going nowhere, continuing to reprise the no. 8 role.

Finally, in attack, the major talking point is Olivier Giroud’s possible participation. During his pre-match press conference, Lampard was quizzed about the probability of Giroud retaining his place in the side and the Chelsea boss was coy in his reply.

“With Giroud, it’s not a case of giving any player assurances over game time because with a competitive squad like ours, that’s very difficult to do. All you want is for players, when they’re out of the team, to train well, get themselves in the team and perform like Oli did the other day because then that gives me nice problems. I’m happy with him – his form is good and he’s training well.” 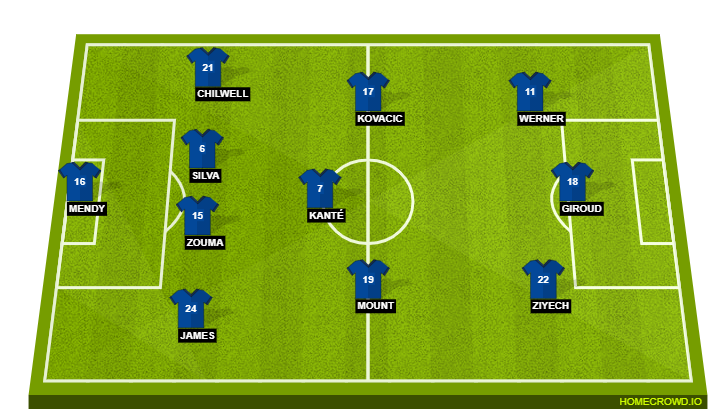 Giroud should lead the line for Chelsea against Leeds following his remarkable four-goal show in the UEFA Champions League this week. The Frenchman, though, should be flanked by Timo Werner and Hakim Ziyech, with Christian Pulisic and Callum Hudson-Odoi dropping down to the bench.