Manchester United are reportedly set to go head to head with Chelsea in the race to sign Benjamin Pavard this summer.

According to L’Equipe, as relayed by Sport Witness, Benjamin Pavard is starting at an uncertain future at Bayern Munich following their capture of Matthijs de Ligt. Many expect the Frenchman to leave the club this summer, which has put top clubs such as Manchester United and Chelsea on alert.

Manchester United have already included Pavard in their transfer wishlist, while Chelsea are naturally included in the mix, as they are currently on the lookout for defensive reinforcements, in light of the expected departures of many star players.

The Blues have had to part ways with Andreas Christensen and Antonio Rudiger so far. Many believe Cesar Azpilicueta could follow suit, amid interest from Barcelona. The Spaniard’s potential exit could leave a gaping hole in the Chelsea backline, as the veteran was capable of operating as a centre-back and a right-back.

In an attempt to fill that void, Chelsea could make a move for Pavard. The Frenchman is equally versatile and can operate in multiple positions in defence, including central defence and his favoured right-back. It would make him a handy option for Thomas Tuchel, whose team are currently hopeful of signing Sevilla starlet Jules Kounde. 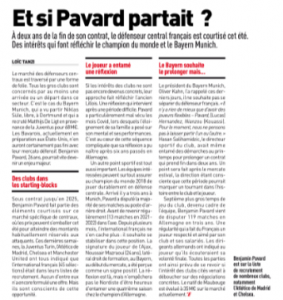 Meanwhile, Manchester United are fresh from the capture of Lisandro Martinez. With the Argentine set to compete with Raphael Varane, Harry Maguire and Victor Lindelof ahead of the new season, the club do not ideally require the services of an additional defender.

However, Pavard is a right-back who has showcased his quality in the past for both club and country. Although his spell at Bayern Munich has been far from ideal, he is still regarded as one of the best right-backs in France, with many rating him highly for his composure. And Bayern Munich will demand around €35 million for him.

In many ways, Pavard resembles the style of Aaron Wan-Bissaka. But the Frenchman offers far more technical quality and is tactically versatile enough to operate as a centre-back. As such, he could prove to be a smart piece of investment, as far as Manchester United are concerned.

The report suggests it might be a great time to snap up the Frenchman as well, knowing Bayern could look to offload one of their star defender after signing de Ligt. Although a contract extension has not been ruled out, a move away from Allianz Arena appears to be the likely outcome, with the Bavarians valuing the right-back at around €35 million.