Sporting CP are reportedly keen on signing Everton loanee Joao Virginia on a permanent deal, but not at the current stipulated price.

According to A Bola, as relayed by Sport Witness, Portuguese champions Sporting CP are interested in converting the loan stay of Everton goalkeeper Joao Virginia into a permanent one.

Joao Virginia spent the early years of his football career at the academies of several Portuguese clubs, including SL Benfica, before moving to the Arsenal youth setup in 2015. After three years, he signed for Everton but has managed three senior appearances for the Toffees. The 22-year-old had a short loan stint at Reading in 2019, and he moved to Sporting last summer in search of regular game-time.

However, the Portuguese shot-stopper has hardly been a regular in the side for Sporting CP, making just seven appearances across all competitions. Joao Virginia has managed three clean sheets in the process.

Despite not being a regular, manager Ruben Amorim and goalkeeping coach Jorge Vital have been left impressed by the 22-year-old. They now wish to land him on a permanent transfer come the end of the season. 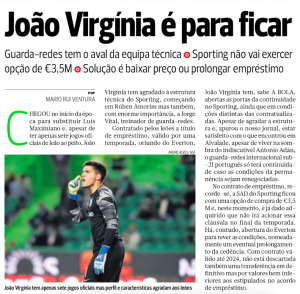 As part of the loan agreement between Everton and Sporting CP last summer, the Portuguese champions can sign the goalkeeper permanently by paying a fee of €3.5 million. However, they do not wish to pay that amount and want to negotiate a lower price with the Premier League club.

Everton, for their part, are open to reviewing the terms of the agreement and would consider a reduced transfer fee for Joao Virginia, despite his contract running until 2024. At the same time, they would also be open to an extension of his loan spell.

Joao Virginia, meanwhile, is believed to be satisfied with his situation at Sporting currently. However, he would likely seek assurances over his playing time and improved wages before signing for the Portuguese champions permanently.

Everton have Jordan Pickford as their first-choice goalkeeper, with Asmir Begovic providing cover. Furthermore, they have rekindled their interest in Barcelona stopper Neto, indicating that Joao Virginia does not have a future at Goodison Park as things stand. So, a permanent transfer would be the best solution for all parties involved.