Manchester United will hope to take a step closer to reaching the Carabao Cup final when they take on Nottingham Forest at City Ground on Wednesday.

The Carabao Cup has reached the penultimate stage, with just four games remaining for two teams to reach the final. Southampton and Newcastle United have locked horns in the first semi-final. And the other contest will feature Nottingham Forest and Manchester United, with City Ground set to host the first leg.

Nottingham Forest struggled in the early days of the 2022/23 season, failing to make a mark in the Premier League. That is when the Carabao Cup offered some much-needed respite. The Tricky Trees have conceded just two goals en route to the semi-finals, beating Grimsby Town, Tottenham Hotspur, Blackburn Rovers, and Wolverhampton Wanderers. And they are currently on a three-game unbeaten run.

On the other hand, Manchester United reached the semi-finals by beating Aston Villa, Burnley, and Charlton Athletic in the last three rounds. But the Red Devils have faced the adverse effects of a relentless fixture pile-up. And Erik ten Hag’s men have failed to win their last two games, the latest being a 3-2 defeat to Arsenal.

Nottingham Forest and Manchester United have already clashed once this season, with the Red Devils cruising to a 3-0 win. The Hard Tackle takes a closer look at the encounter ahead of the latest meeting between the two sides.

"I want to make sure we go into the game with a really positive mindset." 🎙

Hear more from our Head Coach ahead of Wednesday's clash. 👊

Steve Cooper has a gamut of fitness issues hampering his preparations ahead of the Carabao Cup semi-final first leg. Against Manchester United on Wednesday, the Nottingham Forest manager will be bereft of the services of six first-team players.

Dean Henderson is the most notable absentee due to a thigh injury. But the Manchester United loanee was not going to feature for Nottingham Forest due to the terms of his loan deal. Omar Richards (leg), Giulian Biancone (knee), Moussa Niakhate (hamstring), Cheikhou Kouyate (thigh), and Taiwo Awoniyi (groin) are the other players on the sidelines.

But there is some good news, as Ryan Yates should be available after missing the game against Bournemouth due to an illness. But the 25-year-old English midfielder will unlikely feature for Nottingham Forest against Manchester United.

Wayne Hennessey will deputise for Henderson between the sticks, with Nottingham Forest lining up in a 4-3-1-2 formation in front of him. Serge Aurier has been one of the most in-form full-backs in the Premier League and will start as the right-back. And Joe Worrall, Willy Boly, and Renan Lodi pick themselves in the other three spots.

Danilo will sit at the base of the midfield, looking to keep things tight in the middle of the park. Orel Mangala and Remo Freuler should complete a largely defensive-minded midfield unit. But the duo will also focus on quick transitions when the hosts get the ball.

Morgan Gibbs-White has been the signing of the season thus far for Nottingham Forest and will start in the final third. Brennan Johnson is an automatic pick to spearhead the attack, with Gustavo Scarpa playing behind the two strikers. 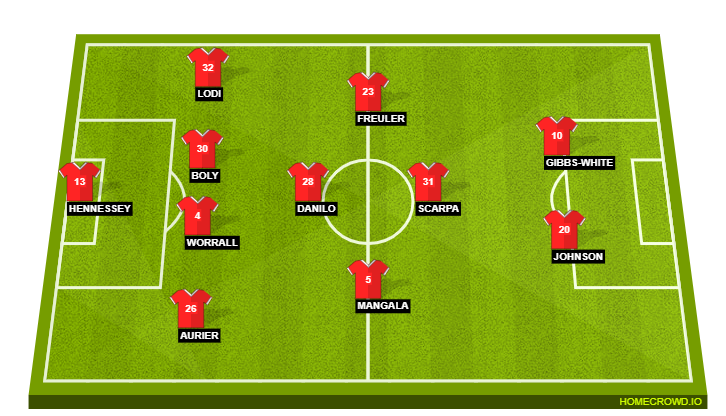 Like his counterpart in the Nottingham Forest dugout, Erik ten Hag does not have as many fitness concerns to deal with ahead of the trip to City Ground. On Wednesday, the Manchester United manager will be without at least three first-team players.

Axel Tuanzebe (knock), Diogo Dalot (thigh), and Donny van de Beek (knee) remain on the sidelines. But Tuanzebe has resumed training and might soon be in contention to represent Manchester United. Meanwhile, Jadon Sancho is also back with the group and closing in on returning to action.

David de Gea picks himself between the sticks, with Manchester United lining up in a 4-2-3-1 formation in front of him. The four defenders are also automatic selections, with Raphael Varane, Lisandro Martinez, Luke Shaw, and Aaron Wan-Bissaka set to start.

Casemiro will return to the starting eleven, taking his place in the double pivot. And the Brazilian international should start alongside compatriot Fred in the middle of the park. So Christian Eriksen will likely earn some much-needed rest after showing the effects of fatigue on Sunday.

Marcus Rashford is one of the most in-form players in the world and will feature on the left flank. Antony should start ahead of Alejandro Garnacho as the other wide attacker. Finally, Wout Weghorst will spearhead the attack again, with Bruno Fernandes reprising the no. 10 role. 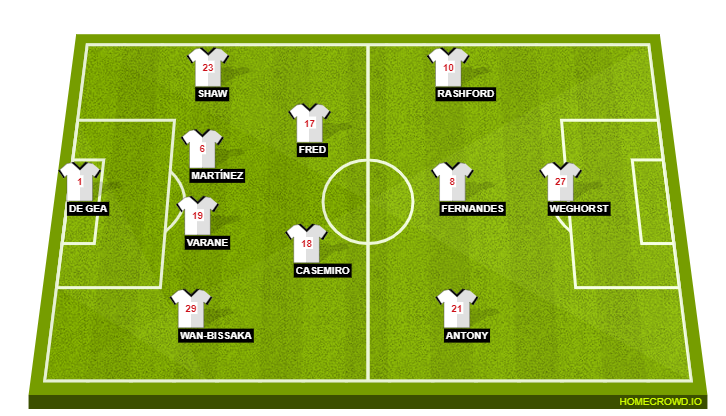 Marcus Rashford might be in the form of his life. But it is Casemiro who makes Manchester United tick with his presence in the middle of the park. The Brazilian international is usually unfazed by the most daunting challenges, and the Red Devils missed his presence against Arsenal.

While Nottingham Forest will not be nearly as threatening as Arsenal, Casemiro can help Manchester United grab a healthy first-leg lead. Expect the experienced midfielder to make the difference from a tenacious midfield display.

Nottingham Forest folded cheaply against Manchester United a few weeks ago. But the Tricky Trees are not a team to be taken lightly when they take the field at City Ground. The hosts have already produced a few memorable performances at home and should take the game to the Red Devils.

But Casemiro’s return makes a world of difference for Manchester United. And the Red Devils will likely keep Brennan Johnson and Morgan Gibbs-White at bay for much of the game. The Hard Tackle predicts Manchester United to clinch a hard-fought 2-0 win over Nottingham Forest.