Fulham will host an under-fire Tottenham Hotspur at Craven Cottage on Monday in the Premier League.

Tottenham Hotspur will only be targeting a win when they travel to Craven Cottage for their next game in the top flight against Fulham. Spurs digested a bitter 4-2 defeat at the hands of reigning champions Manchester City, while Fulham conceded a late goal to Newcastle United.

Fulham remain in contention for a European berth, and a win over Spurs can help them in fulfilling their ambitions. They are only two points adrift of Spurs. And had Aleksandar Mitrovic not missed the penalty against Newcastle United, they would have been in a different position.

For Tottenham, It has not been the right kind of desire, as they sensationally squandered a two-goal lead to concede four times against Manchester City. Spurs now need to take note of Brighton & Hove Albion’s point loss against Leicester and should come with more force in the next game.

They got the better of Fulham in the reverse fixture and will have to replicate that formula if they really want to put their season back on track this time. The Hard Tackle takes a closer look at the encounter ahead of the latest meeting between the two sides.

💬 On preparation: "We are going to prepare with a normal week. Spurs played last night which will have an impact, and let's hope it will be a good impact for ourselves."#FULTOT pic.twitter.com/zr3QKUYs1Q

Fulham have had a gap of eight days since their narrow loss to Newcastle United in the Premier League. The Cottagers will unlikely ring in many changes, as Marco Silva will put his belief in his existing crop of players.

Antonee Robinson will be back after serving his one-game suspension, while Neeskens Kebano has been ruled out for an elongated period. This game could come too soon for Shane Duffy, who will likely remain unavailable.

Bernd Leno will once again take his position in between the sticks. Issa Diop and Tim Ream should feature at the heart of the defence, while Robinson will join Kenny Tete in the full-back department, with the duo looking to remain compact at the back.

Joao Palhinha has been a mainstay since his summer arrival at Craven Cottage. And the Portuguese international will once again be needed in the middle of the pitch. Harrison Reed will be preferred alongside Palhinha to resist Tottenham’s midfield pressure.

Andreas Pereira has been in the thick of things. And the former Manchester United midfielder will once again be involved from the number 10 position. Bobby De Cordova-Reid and Willian will be the obvious choices on the flanks, and Aleksandar Mitrovic will lead the line.

Losing back-to-back big games would have been a matter of prestige. So Antonio Conte will be fancying a much-needed victory on Monday. Except for Bryan Gil and Lucas Moura, the Tottenham manager will have a fully fit squad to choose from against Fulham.

Clement Lenglet will be invited to partner Eric Dier and Cristian Romero in the three-man defence. Emerson Royal should be on the right side, while Ryan Sessegnon should replace Ivan Perisic on the left flank.

Conte admitted players like Dejan Kulusevski and Rodrigo Bentancur might need rest due to fatigue issues. But given the importance of this game, Bentancur will pair up with Pierre-Emile Hojbjerg in the midfield.

Kulusevski will keep his place on the right, while Richarlison should be introduced in a bid to make some impact from the left amid the struggles of Son Heung-min. Finally, Harry Kane will be leading the line for Tottenham against Fulham. 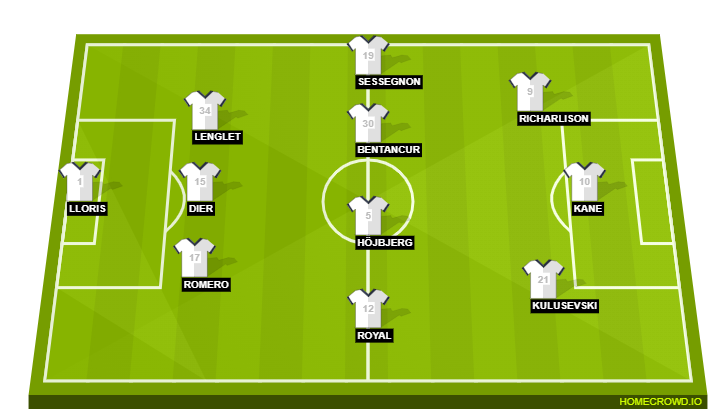 There have been severe questions regarding Harry Kane’s future amid widespread links with Manchester United. But the English striker has been scoring goals for fun. He might not have won any kind of honours for Spurs, but he is pretty determined to end his trophy drought. And Antonio Conte will rely on the Tottenham talisman once again versus Fulham.

Kane has scored more London derby goals than any other player in Premier League history (47). He has found the back of the net in four of his five league appearances against Fulham, although the only failure in this run was his only game at Craven Cottage. So one can back Kane to come good in this fixture, despite Tottenham’s struggles.

Tottenham’s recent form has not been that encouraging. But they will have the urge to put an end to their miserable run and will take the game to Fulham. The game might not have much in it and could end up being a cagey affair. With that in mind, The Hard Tackle suggests a narrow 1-0 win for the visitors.