Real Madrid will look to build on the midweek cup win when they take on Athletic Club at San Mames on Sunday.

The matches continue to come thick and fast across Europe. And the 2022/23 La Liga season is fast approaching its midway point. Matchday 18 is underway, and the action on Sunday will end at San Mames, where Athletic Club will welcome Real Madrid for a crucial game for both teams.

Ernesto Valverde returned to Athletic Club for the first time since departing from San Mames in 2017. But things have not gone smoothly for the 58-year-old in his latest stint with the Lions. The Basque giants sit in the eighth spot on the table, dropping down the standings due to the recent run of results. And they have managed only two wins in their last ten La Liga games.

On the other hand, Real Madrid started the 2022/23 season superbly, winning games for fun. But their form has nosedived in the last few outings, particularly since the season’s resumption last month. The Merengues have won only three of their last eight games in regulation time. But they returned to winning ways with a comeback 3-2 victory against Villarreal in Copa del Rey this week.

The corresponding fixture last season saw Real Madrid eke out a narrow 2-1 win, with all three goals coming in the game’s first ten minutes. The Hard Tackle takes a closer look at the encounter ahead of the latest meeting between the two sides.

Ernesto Valverde barely has any fitness issues hampering his preparations ahead of his side’s latest game. Against Real Madrid on Sunday, the Athletic Club manager will be bereft of the services of just two first-team players.

One of the absentees is due to a suspension, with Yeray Alvarez serving a one-match ban. Apart from the 27-year-old, Inigo Martinez might miss out due to his recent fitness troubles. So Valverde only has central defensive concerns to deal with this weekend.

Unai Simon should take his spot between the sticks, with Athletic Club lining up in a 4-2-3-1 formation in front of him. Aitor Paredes and Dani Vivian are the only centre-backs available. So the two pick themselves to form the central defensive partnership. Meanwhile, Oscar de Marcos and Yuri Berchiche will be the two full-backs.

The two wide defenders will be crucial to Athletic Club’s offensive output on the night. Moving into the midfield, Dani Garcia and Mikel Vesga should form the double pivot. The duo will primarily look to keep things tight in the middle of the park while looking to transition from defence to attack quickly.

Oihan Sancet will be the most advanced midfielder for Athletic, reprising the no. 10 role on Sunday. The Williams brothers, Inaki and Nico, will likely be the two wide attackers. The duo’s directness should keep Athletic in good stead against Real Madrid. Finally, Gorka Guruzeta will lead the line for the hosts. 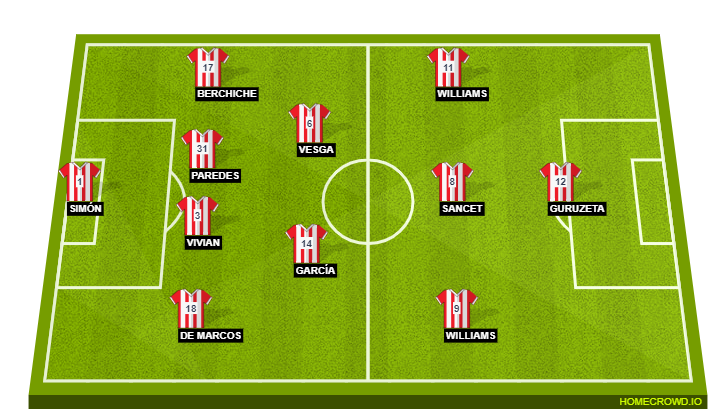 Unlike his counterpart in the Athletic Club dugout, Carlo Ancelotti will have a few pressing injury concerns to deal with ahead of the trip to San Mames. The Real Madrid manager will be without five first-team players on Sunday.

Eden Hazard is the latest player unavailable, with the Belgian international sustaining an ankle injury. The 32-year-old has joined Dani Carvajal (muscle injury), David Alaba (leg), Lucas Vazquez (ankle), and Aurelien Tchouameni (leg) on the sidelines. The rest of the players are available and part of the travelling squad.

Thibaut Courtois should take his spot between the sticks, with Real Madrid lining up in a 4-3-3 formation in front of him. With Alvaro Odriozola not in Ancelotti’s plans, Nacho picks himself as the right-back in the absence of Carvajal and Vazquez. Ferland Mendy, Antonio Rudiger, and Eder Militao pick themselves in the other defensive spots.

Eduardo Camavinga has a golden opportunity to shine in Tchouameni’s absence. And the young Frenchman will sit at the base of the Real Madrid midfield unit. Luka Modric and Toni Kroos should join Camavinga in the middle of the park.

As for the offensive unit, Rodrygo Goes will be eager to shine after a few frustrating weeks playing backup. The Brazilian international will likely join Karim Benzema and Vinicius Junior in the final third. And Marco Asensio and Federico Valverde will be among Ancelotti’s backup options. 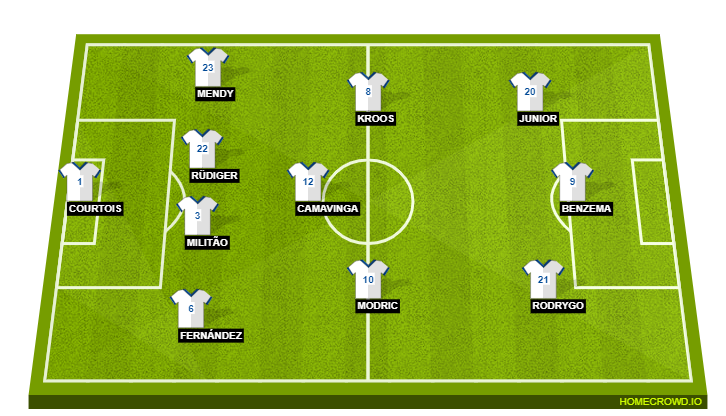 Things have gone pear-shaped for Camavinga since joining Real Madrid from Rennes. While the Frenchman was one of the best young midfielders in the world, he has not progressed considerably at the Santiago Bernabeu. And recent reports have linked the 20-year-old with Arsenal.

But his agent has taken no time to quash the rumours. In addition, Carlo Ancelotti has made sure to address the speculation, suggesting Camavinga is an important player for Real Madrid. And with Aurelien Tchouameni sidelined with an injury, the youngster has the chance to leave a lasting impact on Ancelotti. A game or two as a regular might bode well for him.

Athletic Club will not make things easy for Real Madrid, with the two teams blowing hot and cold lately. The hosts have struggled to stitch together a positive run of results, while the Merengues have not been at their best in the last few weeks. So the game sets up nicely.

But with Athletic Club showing a soft underbelly lately, Real Madrid will have the chance to clinch the three points. And Karim Benzema should make the difference on the night, scoring the match-winner again. The Hard Tackle predicts a 2-1 win for Carlo Ancelotti’s charges.