Portugal will take on Uruguay in their next FIFA World Cup 2022 group game, and this one promises to be a thriller.

Fernando Santos’s men secured a 3-2 win over Ghana in their opening group game, and they were fortunate to escape with all three points thanks to a number of controversial decisions from the referee. Portugal will have to improve immensely if they want a similar result against Uruguay here.

Uruguay were held to a 0-0 draw by South Korea, and they will be under pressure to pick up a win here. La Celeste had a few chances to win the game against the Asian outfit. But the likes of Darwin Nunez and Federico Valverde failed to find the back of the net.

Both teams will know that a defeat here could complicate matters for them, and they will be determined to pick up all three points. They are the two best teams in the group, and this should be a close contest. The Hard Tackle takes a closer look at the encounter ahead of the latest meeting between the two sides.

One nation with one goal: 𝗪𝗜𝗡𝗡𝗜𝗡𝗚 and make it to the round of 16! ✊🇵🇹 #WearTheFlag pic.twitter.com/dXTZ0WItks

Fernando Santos is unlikely to make too many changes to the side that edged past Ghana in the last match. But the Portugal head coach will have to make one forced change, with Danilo Pereira breaking his ribs in training. The 31-year-old is reportedly out of the group stage with his injury.

Diogo Costa is likely to start in goal despite his late blunder (which did not prove costly) against Ghana. Joao Cancelo and Raphael Guerreiro will likely start as the full-backs, and Ruben Dias should partner Pepe at the heart of the defence. The 39-year-old will replace the injured Danilo.

Ruben Neves and Bernardo Silva will retain their places in the midfield three. And Bruno Fernandes should drop into a slightly deeper role alongside Silva. Portugal will need his creative quality and ability to carve out the openings against Uruguay’s resolute defence.

The front three will comprise of Cristiano Ronaldo in the central role. He is likely to be flanked by the two goalscorers from the last game – Joao Felix and Rafael Leao. So Otavio will drop to the bench, with the player also struggling with a knock. 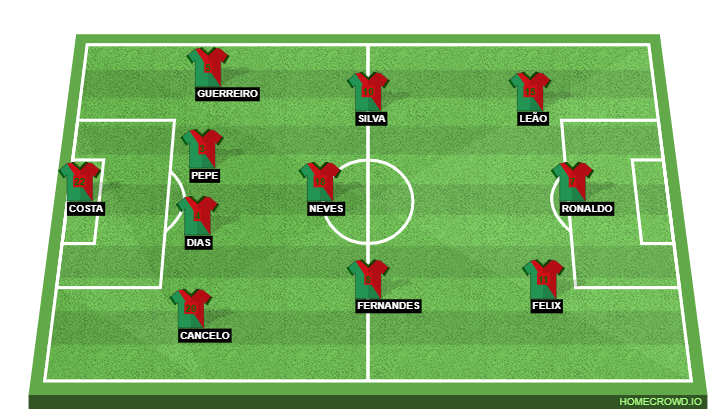 Diego Alonso is likely to retain the side that drew against South Korea. Sergio Rochet will start in the Uruguay goal behind a back four of Martin Caceres, Diego Godin, Jose Maria Gimenez and Mathias Olivera.

Rodrigo Bentancur will continue as the controller in the midfield, with Matias Vecino as the defensive midfielder. Meanwhile, Federico Valverde will be the box-to-box midfielder and provide a goal threat from the middle of the park.

Youngster Facundo Pellistri will start on the right flank, and Darwin Nunez is likely to retain his place on the left wing despite missing a number of chances against South Korea. Finally, Luis Suarez will lead the line for Uruguay against Portugal.

The Uruguayan striker had a disappointing time in front of the goal against South Korea, and he will be desperate to put things right here. Nunez’s overall performance was pretty good, and he caused all sorts of problems with his pace and directness.

Portugal gave away a number of opportunities to Ghana, and they could struggle against Uruguay here. Joao Cancelo has not been at his defensive best, and Nunez will be eager to trouble him tomorrow.

Both teams are capable of picking up all three points here, and this should be an evenly-matched contest. Neither side looked really good in their opening game, and this one is likely to be another slow burner.

Portugal and Uruguay will not want to end up on the losing side, and they will take a cautious approach here. They are likely to cancel each other out in the end, with the game ending in a 1-1 draw. And depending on the result in the game between Ghana and South Korea, the group might be wide open on Matchday 3.