South Korea and Ghana will wage a battle to stay relevant in the FIFA World Cup 2022, and they can ill-afford a defeat.

Paulo Bento’s South Korea are in with a chance in this World Cup after a rather shallow start to their campaign, although they need to get past Ghana. A solid defensive performance, marshalled by Kim Min-jae at the back, saw the Asian side thwart the prolific Uruguay lineup and earn a point.

The big problem for the Portuguese coach would be the attacking side of things. South Korea failed to muster a single shot on target, while on the other end, they were fortunate for two of Uruguay’s efforts hit the crossbar. The draw opened up possibilities for the Tigers of Asia, but they have work to do against Ghana.

Avoiding defeat against the Black Stars is imperative, but a win will put them in a solid position going into Round of 16. If they are to draw against Ghana, prayers will get directed toward a Portugal win against Uruguay. Then again, South Korea will need to trump Cristiano Ronaldo & co. in the last Group H clash.

The point earned by South Korea keeps them in good stead, something Ghana came close to achieving against the Portuguese. Diogo Costa’s spectacular howler almost gifted Inaki Williams an equaliser at the death as Ronaldo and his teammates watched on helplessly from the sidelines.

Despite taking the game to the wire, Ghana were far from spectacular in that clash. Andre Ayew’s equaliser set things up nicely, but Joao Felix and Rafael Leao put Portugal in a commanding position. Osman Bukari spiced things up late in the game after pulling another goal back.

While the game could have ended in a draw, Ghana must now live to fight another battle, and the South Korea game will determine their fate in Qatar. A loss will eliminate the Black Stars from the tournament, irrespective of what happens between Portugal and Uruguay. Hence, a positive result becomes imperative for Otto Addo’s men to stay relevant in the tournament.

Paulo Bento might make a few tweaks to the starting eleven, barring any fresh concerns with his playing squad. The team did not unscathed against Uruguay, as the South Korea manager awaited key stars returning to full fitness. One of them is Kim Min-jae, who is out due to an injury.

Hwang Hee-chan remained an unused substitute in the opening game, and his situation is unlikely to change against Ghana. Bento will certainly hope the Wolverhampton Wanderers attacker returns to fitness, especially if they qualify for the knockout stages. But Hwang has resumed training ahead of the Ghana game.

Bento will also hope for a revival in the goalscoring form of star man Son Heung-min ahead of the Ghana clash. South Korea have had no shots on target in two of their last four World Cup games, with the Uruguay clash being the latest.

Much of South Korea’s progression on the pitch will depend on a few key men. Kim Min-jae in defence was key to their chances, but Kwon Kyung-won will replace him. Meanwhile Son Heing-min will remain the de-facto leader in the attack. Once again, Hwang Ui-jo will lead the line for the South Koreans. 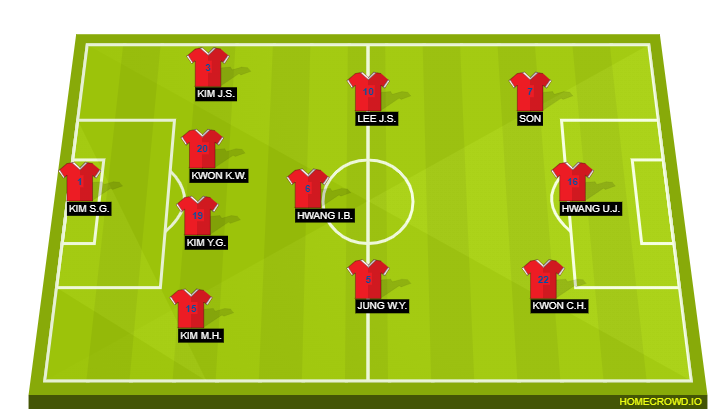 Otto Addo’s squad suffered no new problems from the Portugal game, meaning the Ghana head coach will have a full squad to choose from ahead of the South Korea clash. There were yellow cards for four of his players against Portugal, but naming them in the lineup is a risk the manager is willing to take.

Addo may consider changing in shape if he wishes to bring Osman Bukari into the fold. The winger would likely dislodge the back three system, which could put Mohammed Salisu’s place at risk.

Bukari’s inclusion could allow Mohammed Kudus to play an even more advanced role, with the Ajax attacker providing the assist for the leveller by Andre Ayew. For now, a change in shape could be the assumed lineup from Addo.

Addo could also resist the temptation of using Jordan Ayew, who could remain a formidable weapon for the manager from the bench. Andre Ayew and Inaki Williams could lead the attacking line for Ghana against South Korea.

Plenty of players from Ghana and South Korea have a unique chance to shine, but Kudus will be the man in focus due to the need of the hour. The Ajax attacker is highly sought-after in the market amid interest from Tottenham and Borussia Dortmund. And saving his nation from on the brink of elimination will bolster his stock further.

Kudus needs to weave his magic and put pressure on an otherwise tight South Korean defence. His skills could unlock the stiff Asian backline, while he should remain clinical when afforded chances inside the box. With a change in shape, the Ajax man will likely play a prominent role in the attacking third.

Both teams have shown problematic symptoms from their opening games, with no indication that these sides can win emphatically. Hence, assuming this would be a stiff draw, in the end, is fair. However, South Korea and Ghana can find a winner somewhere, which could also become a possibility.

While Ghana have shown they can be clinical in front of goal, South Korea have shown a defensive solidity that refuses to let the opposition have a sniff at their goal. The FIFA World Cup 2022 has thrown surprises on many occasions. But there may not be that element when Ghana and the South Koreans face off.