Brazil will aim to seal a spot in the FIFA World Cup 2022 Round of 16 when they take on Switzerland at Stadium 974 on Monday.

The group stage of the FIFA World Cup 2022 will culminate in the coming midweek. But before the final phase of fixtures begins, the curtains will fall on Matchday 2 on Monday. And Brazil will have the chance to reach the Round of 16 when they take on Switzerland at Stadium 974.

Brazil entered the FIFA World Cup 2022 as one of the pre-tournament favourites. And the solid run of form continued on Thursday as the Selecao beat Serbia 2-0 at the Lusail Stadium. While Tite’s men did not look in full flow, the result extended their winning run to eight games, although it came at a cost.

On the other hand, Switzerland came to Qatar as a potential dark horse to lift the Jules Rimet Trophy. And while the Nati did not look fluent by any stretch of the imagination on Thursday, they clinched a 1-0 win over Cameroon. The result has left Murat Yakin’s team in a healthy position to reach the Round of 16.

Brazil and Switzerland last clashed at the FIFA World Cup 2018, with goals from Philippe Coutinho and Steven Zuber ensuring a 1-1 draw. The Hard Tackle takes a closer look at the encounter ahead of the latest meeting between the two sides.

NEWS | It is being reported that Neymar and Danilo have been ruled out of Brazil's remaining World Cup group stage matches, due to injury 🇧🇷#FFScout | #FIFAWorldCup pic.twitter.com/RH7hX6fdfH

Tite has a couple of new injury concerns hampering his preparations ahead of the game against Switzerland. The Brazil head coach will be without two first-team players on Monday, with Danilo and Neymar sustaining ankle injuries.

Brazil might have missed Neymar sorely in the last two editions of the FIFA World Cup. But that is not the case in Qatar, with Tite having plenty of offensive quality at his disposal. And Rodrygo Goes is in line to replace Brazil’s talisman against Switzerland on Monday.

The young attacker has revelled in a central position for Real Madrid this season. And Rodrygo should reprise the no. 10 role for Brazil against Switzerland. The 21-year-old will play behind Richarlison, looking to be direct in his approach. So Vinicius Junior and Raphinha will don the creative hat from the flanks for the Selecao.

Lucas Paqueta and Casemiro have forged a colossal midfield partnership. And the duo will aim to hold the fort in the middle of the park while providing the forward thrust during transitions. Fred and Bruno Guimaraes are backup midfield options for Tite.

In Danilo’s absence, Eder Militao will make his first start for Brazil in a World Cup game. The 24-year-old will line up alongside Marquinhos, Thiago Silva and Alex Sandro in the backline. Finally, Alisson Becker will take his usual place between the sticks. 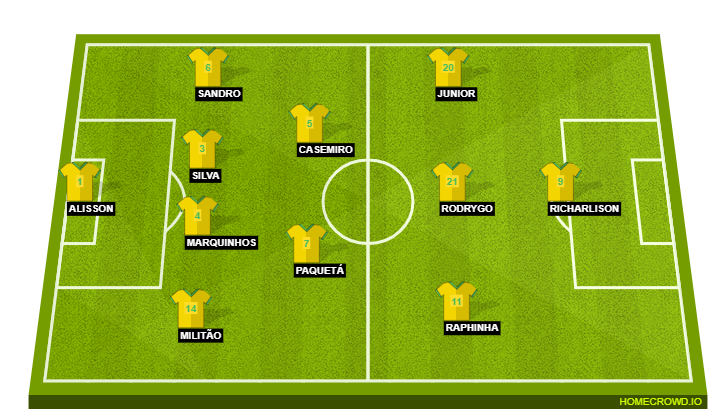 Unlike his counterpart in the Brazil dugout, Murat Yakin does not have any fitness issues on his hands ahead of the trip to Stadium 974. The Switzerland head coach will have a full-strength squad on Sunday.

Yann Sommer will line up between the stick, with Switzerland lining up in a 4-3-3 formation in front of him. The preference for this system means Fabian Schar is unlucky to miss out for the Nati. Manuel Akanji and Nico Elvedi will thus form the central defensive unit, with Ricardo Rodriguez and Silvan Widmer being the full-backs.

Granit Xhaka will aim to keep things tight in the middle of the park. At the same time, the Switzerland captain will look to push his team forward at a quick tempo. Remo Freuler and Djibril Sow will provide defensive support to Xhaka, with the duo also looking to link up with the frontmen.

Breel Embolo made the difference for Switzerland against Cameroon. And the 25-year-old will aim to rise to the occasion again on Monday versus Brazil. Xherdan Shaqiri and Ruben Vargas will be the two wide men, with the former looking for a timely moment of genius he usually produces in big tournaments. 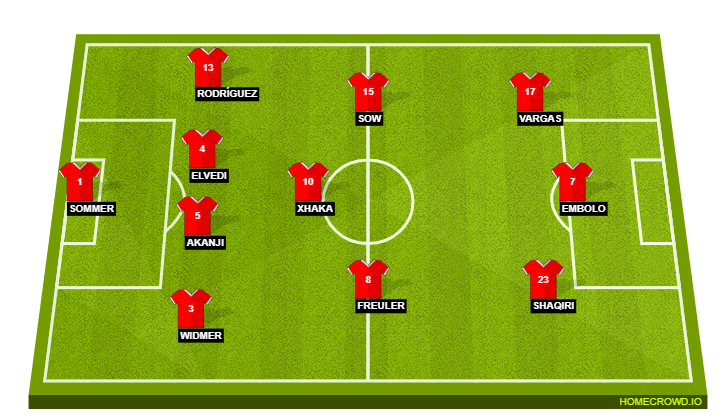 Vinicius Junior has been sensational for Real Madrid this season, with no other player scoring more often for Los Blancos thus far. The 22-year-old was in fine form against Serbia last week, finding Richarlison in the build-up to the spectacular second goal.

With Neymar unavailable to take on Switzerland, Vinicius Junior will have the onus on him to provide the creative touch in the final third. Richarlison seems to have the goalscoring responsibility under control. So the youngster can focus on slicing the opposition defence open with his bursts forward. At the same time, Vinicius will also provide a goal threat.

The World Cup injury curse continues to plague Neymar. But Brazil will not fret his absence as much as they have in the past. Tite’s offensive options are world-class, and Richarlison showed that with a goal of the tournament contender. The 25-year-old will again be a pivotal figure for Brazil against Switzerland.

In addition, Vinicius Junior will rise to the occasion and make the difference. Switzerland will likely give Brazil a run for their money. But the Nati will not have enough offensive quality to trouble Alisson Becker. The Hard Tackle predicts a hard-fought 1-0 win for the Selecao, who should reach the Round of 16 on Monday.