Brazil will aim to start the FIFA World Cup 2022 campaign on a strong note when they take on Serbia at the Lusail Stadium on Thursday.

The FIFA World Cup 2022 is up and running, with the games producing a variety of emotions. There have been run-of-the-mill results and a few upsets, sprinkled with some stalemates. And the action on Thursday will conclude at the Lusail Stadium, where Brazil and Serbia will face off.

Brazil will enter the FIFA World Cup 2022 with the feeling that Tite has had an entire cycle to mould the squad. And the proof is in the pudding, with the Selecao winning the last seven games while conceding only twice. What’s more, they have scored three or more goals in all but one game. So despite the disappointment at Copa America last year, Brazil will be the favourites in Qatar.

On the other hand, Serbia reached the FIFA World Cup 2022 by topping Group A in the UEFA leg of the qualifiers. The Eagles did not lose a single game and dropped points on just two occasions in eight outings. And Dragan Stojkovic’s men come into the group stage on the back of a six-match unbeaten run (W5 D1).

Brazil clinched a 2-0 win the last time they locked horns with Serbia, with Paulinho and Thiago Silva scoring. The Hard Tackle takes a closer look at the FIFA World Cup 2022 encounter ahead of the latest meeting between the two sides.

The Brazil squad are already making friends in Qatar 🥰 pic.twitter.com/Tpu6TUnOB9

Brazil head coach Tite has a full-strength squad at his disposal ahead of the FIFA World Cup 2022 opener against Serbia. Alex Telles, Bruno Guimaraes, and Antony have all recovered from their respective minor fitness issues. But the trio will not make the starting eleven.

Alisson Becker picks himself between the stick, with Brazil lining up in a 4-2-3-1 formation in front of him. Thiago Silva and Marquinhos should reunite at the heart of the defence in a throwback to their partnership at Paris Saint-Germain. Danilo will likely pip Dani Alves as the right-back, with Alex Sandro starting ahead of Telles on the left flank.

Neymar has been excellent while reprising the no. 10 role for Brazil and will pull the strings against Serbia. Vinicius Junior should get the chance to impress from the left flank, with Raphinha starting on the right wing. Finally, Richarlison, who has revelled as a central striker, will lead the line. 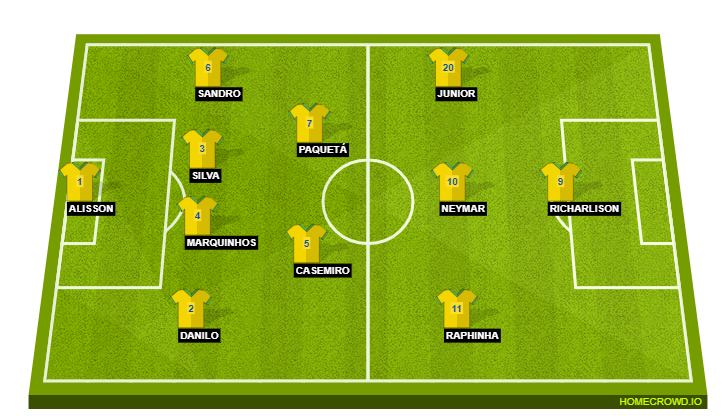 Unlike his counterpart in the Brazil dugout, Dragan Stojkovic is sweating over the fitness of one player. Aleksandar Mitrovic is struggling with an ankle injury that forced him out of action ahead of the World Cup break.

Stojkovic famously remarked that Mitrovic would have gone to Qatar even “without a leg”. But the Serbia head coach might not risk the 28-year-old against Brazil. So Luka Jovic might get an opportunity to make his mark from the get-go.

Mitrovic is about done his rehab & will be back training with the team on Monday & should be fully ready for Brazil 💪 https://t.co/QqND2ZBGgi

The 24-year-old will form the strike partnership with Dusan Vlahovic, with Mitrovic recharging his battery for the toughest tests that await. Dusan Tadic will sit just behind the two sides, looking to slice up Brazil’s defence. His directness will also be an asset for Serbia,

Serbia’s strength will lie in midfield, where the in-form Sergej Milinkovic-Savic will hold the fort along with Nemanja Gudelj. The duo will aim to keep things tight in the middle of the park while pushing the Eagles forward with purpose.

The defensive unit will need to be in top form to restrict an undeniable Brazilian attack. Stefan Mitrovic, Nikola Milenkovic, and Strahinja Pavlovic will form the central defensive partnership. Meanwhile, Andrija Zivkovic and Filip Kostic will be the two wing-backs, with the duo providing width in the final third. 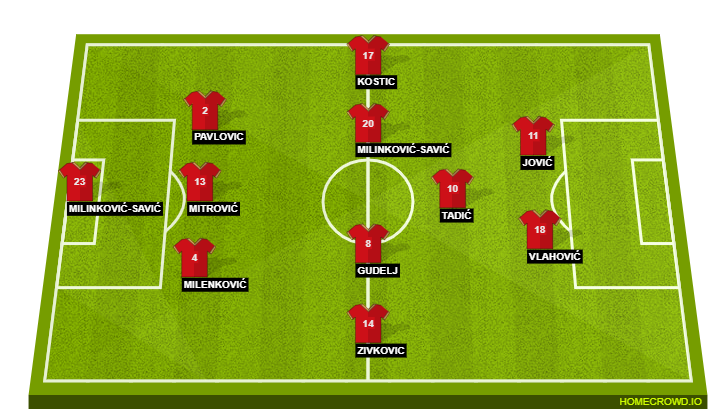 All eyes will invariably be on Neymar whenever he takes the field for Brazil at the FIFA World Cup 2022. But how Richarlison fares as the central striker will go a long way in determining the fate of the Selecao in Qatar.

Brazil’s shortcomings in Russia four years ago were largely due to the absence of a prolific striker. But Richarlison has been a revelation in the role while representing his national side. The 25-year-old needs to be at his best against Serbia to set the tone for a memorable World Cup campaign.

Brazil will face Serbia, Switzerland, and Cameroon in a tricky Group G. So starting the campaign on a strong note will be necessary for Tite’s men. But Serbia will not be pushovers, with Dragan Stojkovic forging a resilient unit that can give the best teams a run for their money.

The Eagles should get past a solid Brazilian defence, especially if the full-backs are not up to the mark. But Brazil’s offensive unit is undeniable and will put Serbia to the sword. The Hard Tackle predicts a keenly-contested affair that Brazil should clinch with a 3-1 win.