Argentina will hope to begin the FIFA World Cup 2022 campaign with a flourish when they take on Saudi Arabia at the Lusail Stadium on Tuesday.

The FIFA World Cup 2022 is underway, and we will settle into the “four games a day” schedule from Tuesday. The action on the day will kick off at 10 am GMT, with Argentina and Saudi Arabia going head to head at the Lusail Stadium in their respective openers.

Argentina reached the FIFA World Cup 2022 by finishing runners-up in the CONMEBOL leg of the qualification campaign. Lionel Scaloni has forged a formidable unit since taking charge of the team four years ago. And La Albiceleste won the Copa America last year and will enter the World Cup on the back of a 36-game unbeaten run.

On the other hand, Saudi Arabia had been imperious in the run to the FIFA World Cup. They first finished the second round of the qualifiers unbeaten after eight games before topping their group in the third round ahead of the more fancied Japan and Australia. The Green Falcons, led by Herve Renard, enter the World Cup with a run of one defeat in eight games.

The most recent meeting between Argentina and Saudi Arabia had ended in a goalless draw in a friendly in 2012. The Hard Tackle takes a closer look at the encounter ahead of the latest match-up featuring the two sides.

Lionel Scaloni has seen his squad get struck by injury woes heading into the FIFA World Cup 2022 campaign. Nicolas Gonzalez and Joaquin Correa have withdrawn from the group due to their respective issues. Meanwhile, the Argentina head coach has been sweating over the fitness of three other players.

Lionel Messi had reportedly trained individually on Saturday, but he should be fit enough to start for Argentina against Saudi Arabia. In addition, Scaloni had concerns about Lisandro Martinez and Exequiel Palacios. But like Messi, the duo should be available, although neither will start.

Scaloni will line Argentina up in a 4-3-3 formation against Qatar, with Emiliano Martinez starting between the sticks. Cristian Romero and Nicolas Otamendi should form the central defensive unit, with Nahuel Molina and Marcos Acuna being the full-backs.

Up ahead in midfield, Leandro Paredes will hold the fort and look to set the tempo. Rodrigo De Paul and Alexis Mac Allister should get the nod as the other two midfielders, and the duo will provide defensive support to the 28-year-old. De Paul and Mac Allister will also look to push La Albiceleste forward on transitions.

Lionel Messi will be the man under the spotlight for Argentina in what is likely his final World Cup. The veteran attacker will be eager to bow out on a high at the biggest stage. And Messi will need support from Lautaro Martinez and Angel Di Maria in the final third to guide Argentina all the way. 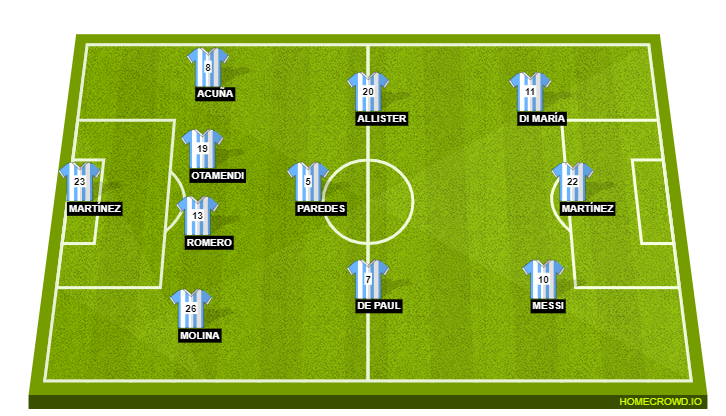 Like his counterpart in the Argentina dugout, Herve Renard has a few concerns hampering his preparations ahead of Saudi Arabia’s first fixture at the FIFA World Cup 2022. The French tactician might be without two players on Tuesday.

Riyadh Sharahili has sustained a muscular injury that has left his World Cup hopes to hang by a thread. In addition, Renard is sweating over the fitness of Hassan Tambakti. But neither player might have started against Argentina anyway. So the Saudi Arabia head coach can name his strongest starting eleven.

Renard should line the Green Falcons up in a 4-2-3-1 formation that will see the double-pivot adopt a safety-first approach. Mohammed Al-Owais will take his place between the sticks, with the backline featuring Mohammed Al-Breik, Abdulelah Al-Amri, Ali Al-Bulaihi, and Yasser Al-Shahrani.

Mohamed Kanno and Abdulellah Al-Malki will be responsible for keeping things tight in the middle of the park. The duo will need to restrict the flow of possession towards Lionel Messi from Rodrigo De Paul and Alexis Mac Allister.

Saleh Al-Shehri and Salem Al-Dawsari should be the two wide men, with Salman Al-Faraj reprising the no. 10 role. The wide pair will support Firas Al-Buraikan, who will spearhead Saudi Arabia’s attack against Argentina on Tuesday. 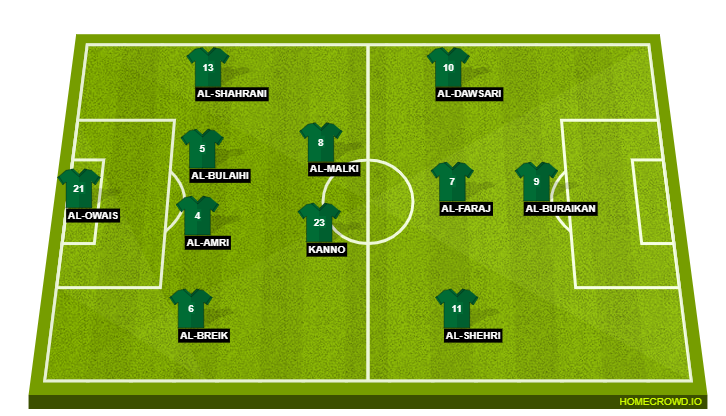 All eyes are invariably on Lionel Messi when he takes the field in a game. The 35-year-old has been sensational at the club level this season and seems a man reborn heading into the FIFA World Cup 2022. And Messi will be one of the favourites to win the Golden Ball when the tournament ends next month.

Messi has been spearheading Argentina’s attack for an eternity and has been in his element lately on the international stage. After leading La Albiceleste to the Copa America triumph last year, he will be eager to end his World Cup drought. And the diminutive wizard will be desperate to avoid the struggles from the 2018 edition, starting with the game against Saudi Arabia.

Argentina last lost a game in 2019, in the Copa America semi-finals against Brazil. And they have Italy’s all-time unbeaten record in sight, which they should ideally break before the group stage ends. On the other hand, recent games involving Saudi Arabia have been drab, with the two teams barely scoring more than twice in a match.

But the Green Falcons are no match for the mighty Argentina. And while Herve Renard will hope to see his men put up a fight, the gulf in quality will ultimately prove telling. The Hard Tackle predicts Lionel Scaloni and his charges to clinch a record-equalling 37th unbeaten result with a 2-0 win over Saudi Arabia.