Barcelona will look to end the UEFA Champions League campaign on a positive note when they take on Viktoria Plzen at Doosan Arena on Tuesday.

The UEFA Champions League group stage will wind down this midweek with Matchday 6. The action on Sunday will feature a few crucial encounters. But the game at Doosan Arena, where Viktoria Plzen and Barcelona will face off, will be a dead rubber between two teams whose fates are sealed.

Viktoria Plzen went into the 2022/23 UEFA Champions League knowing they would be the whipping boys in Group C. And that is what has happened, with the Czech outfit losing all five games so far while retaining a goal difference of -17. But their fortunes have been better in domestic football as they are at the top of the table, with Slavia Praha four points behind.

On the other hand, Barcelona will be disappointed with how the Champions League group stage has turned out. The Catalan giants have failed to make their mark for a second successive season, beating only Viktoria Plzen thus far.

Bayern Munich, who beat them last week, and Inter Milan have thus sealed the top two spots in Group C, with Barcelona destined to drop to the UEFA Europa League irrespective of what happens against Viktoria Plzen. Back at home, the Blaugrana will remain within touching distance of Real Madrid, with Los Blancos only a point ahead at the top of La Liga.

Barcelona cruised to a 5-1 win in the reverse fixture, with Jan Sykora scoring the consolation goal for Viktoria Plzen. Franck Kessie, Robert Lewandowski, and Ferran Torres found the back of the net for the Blaugrana. The Hard Tackle takes a closer look at the encounter ahead of the latest meeting between the two sides.

Michal Bilek has a new roster issue hampering his preparations ahead of the visit of Barcelona. On Tuesday, the Viktoria Plzen manager will be bereft of the services of two first-team players due to fitness issues and suspension.

Petr Pejsa remains on the sidelines due to a long-term knee injury. And Jhon Mosquera is unavailable for Viktoria Plzen against Barcelona due to a suspension accrued after accumulating yellow cards. Otherwise, Bilek has a full-strength squad at his disposal.

Jindrich Stanek will take his spot between the sticks against Barcelona, with Viktoria Plzen lining up in a 3-4-3 formation in front of him. Lukas Hejda, Ludek Pernica and Mohamed Tijani should form the centre-back unit. The trio will aim to remain compact, with the wing-backs supporting them in the defensive phases.

Milan Havel and Libor Holik will be the two wing-backs. The duo will often drop deep to form a back five while providing width in the final third. Pavel Bucha and Lukas Kalvach will sit in the middle of the park, looking to keep things tight in the midfield unit.

Fortune Bassey has not been among the goals consistently for Viktoria Plzen this season. But the Nigerian striker should still spearhead the attack against Barcelona. Finally, Erik Jirka and Adam Vlkanova will likely start as the wide attackers for the hosts. 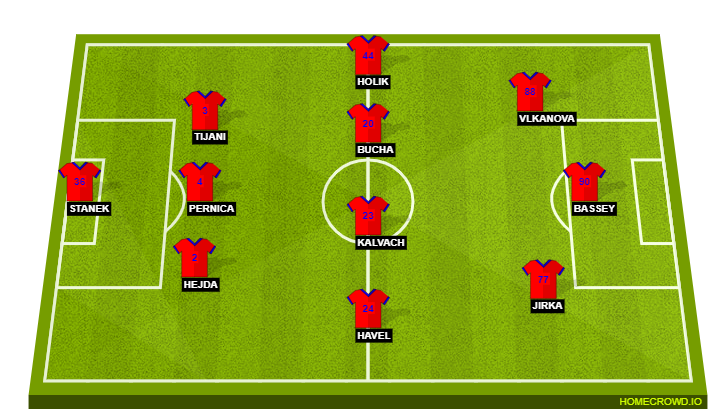 Like his counterpart in the Viktoria Plzen dugout, Xavi Hernandez has a few pressing issues ahead of the trip to Doosan Arena. The Barcelona manager will be without eight first-team players on Tuesday.

Sergio Busquets is one of the latest absentees, with his booking against Bayern Munich meaning he is suspended this midweek. Meanwhile, Eric Garcia (hip) and Jules Kounde (hamstring) are the latest players in the treatment room after sustaining their injuries against Valencia this past weekend.

Robert Lewandowski is not in the travelling squad either due to a minor back injury. Sergi Roberto (shoulder), Andreas Christensen (ankle), Ronald Araujo (hip), and Memphis Depay (hamstring) remain on the sidelines.

Marc-Andre ter Stegen has been ever-present between the sticks for Barcelona this season. And the German international will start against Viktoria Plzen, with the Blaugrana lining up in the usual 4-3-3 formation in front of ter Stegen.

Gerard Pique and Marcos Alonso pick themselves as the makeshift central defensive pairing in the absence of the four first-choice centre-backs. Hector Bellerin is another automatic selection in the backline, while Alejandro Balde should come in for Jordi Alba as the left-back.

Franck Kessie, who has struggled to find a stable footing since joining Barcelona, will have a chance to make his mark. The Ivory Coast international should start at the base of the midfield, with Gavi and Frenkie de Jong starting alongside him in the middle of the park. Pedri will thus have a chance to earn some well-deserved rest.

Xavi might use the game against Viktoria Plzen to afford a few opportunities to some players who have not earned many minutes. So Raphinha, Ferran Torres, and Ansu Fati should form a fluid offensive unit on Tuesday. Ousmane Dembele will be an option off the bench. 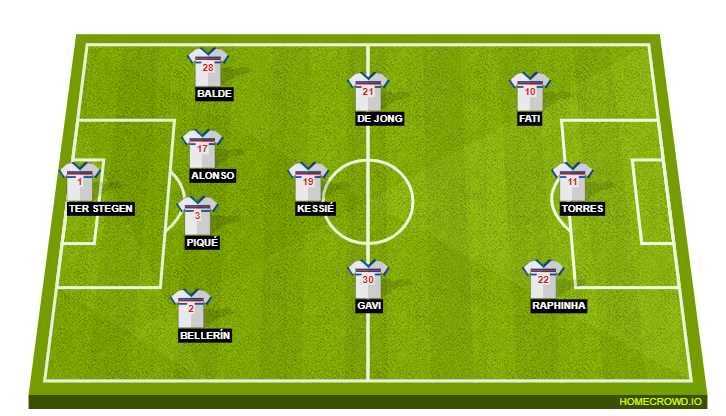 Raphinha arrived at Camp Nou amid much hype and fanfare. But the optimism surrounding the Brazilian international has quickly disappeared. While he produced some eye-catching displays in the first few weeks, his performance levels have dropped lately.

But Raphinha looked decent off the bench against Valencia and will look to carry some confidence into the outing versus Viktoria Plzen. With Robert Lewandowski and Ousmane Dembele locking down two spots in the front three, the former Leeds United talisman will look to secure the third slot. A game-changing performance against Viktoria Plzen should do the trick for Raphinha.

Barcelona and Viktoria Plzen have nothing to play for except pride on Tuesday. So the game will likely have a friendly feel. But Barcelona will still hope to produce a dominant performance to go into the World Cup break on a high. However, while the Catalan giants have been formidable in La Liga, they have shown a soft underbelly in the UEFA Champions League.

Meanwhile, the record for goals conceded in a single UEFA Champions League group stage is 24 by Legia Warsaw in 2016/17 and BATE Borisov in 2014/15. Viktoria Plzen have conceded 20 goals thus far this season and will slightly evade the unwanted landmark. The Hard Tackle predicts a 3-1 win for Xavi Hernandez’s men, with Raphinha and Ansu Fati producing the goods.