Manchester United will aim to progress to the UEFA Europa League knockout stages when they welcome Sheriff Tiraspol to Old Trafford on Thursday.

The 2022/23 UEFA Europa League will resume on Thursday with the penultimate matchday of the group stage. Clubs across the groups are scrambling to seal the top two spots to reach the next stage of the competition. Manchester United and Sheriff Tiraspol are two such clubs, and the two clubs will face off at Old Trafford this week.

Manchester United started the 2022/23 UEFA Europa League campaign slowly, losing 1-0 to Real Sociedad. That result has left them lagging behind La Real, with the Basque outfit winning all four games thus far. But the Red Devils have their fortunes in their hand as back-to-back wins will likely yield them the top spot in Group E.

On the other hand, Sheriff Tiraspol began the campaign with a 3-0 win over Omonia Nicosia. But the Moldovan giants have lost their three games since then and need to win their last two matches to stand a chance of reaching the knockout stages.

Sheriff have been in fine form in domestic football, sitting pretty atop the Moldovan National Division table. But the recent defeat to Petrocub Hincesti spelt the end of Stjepan Tomas’s time at the club as the Croat tendered his resignation. On the other hand, Manchester United played a 1-1 draw with Chelsea this past weekend, dropping to sixth in the Premier League standings.

The reverse fixture, played at the Zimbru Stadium last month, ended in a 2-0 win for Manchester United. Jadon Sancho broke the deadlock before Cristiano Ronaldo rounded the win from the spot. The Hard Tackle takes a closer look at the encounter ahead of the latest meeting between the two sides.

Wishing you a speedy recovery, @RaphaelVarane — you've got this! 💪❤️#MUFC || #UEL

Erik ten Hag has greeted a mixed bag of updates on the team news front ahead of the visit of Sheriff Tiraspol. On Thursday, the Manchester United manager will be bereft of the services of four first-team players.

Raphael Varane is the latest absentee, with the Frenchman likely to miss the 2022 FIFA World Cup after sustaining an ankle injury against Chelsea. On the positive side, Harry Maguire, Aaron Wan-Bissaka, and Donny van de Beek have resumed training. And the trio will be in contention to feature against Sheriff.

But Brandon Williams, Axel Tuanzebe, and Anthony Martial remain on the sidelines due to their respective issues. Meanwhile, Cristiano Ronaldo could return to action after completely sitting out the game against Chelsea on the weekend.

However, Ronaldo might not return to the starting eleven straightaway. Marcus Rashford should thus spearhead the Manchester United attack against Sheriff. Jadon Sancho and Antony will continue as the two wide attackers, with Bruno Fernandes reprising the no. 10 role.

Christian Eriksen has forged a solid partnership with Casemiro in the middle of the park. And even though Fred was sensational last week against Tottenham Hotspur, the Brazilian will remain on the bench. Scott McTominay, who scored the winner against Omonia Nicosia, will also be a substitute.

Victor Lindelof will be the first benefactor from Varane’s absence. The Swede will line up alongside Lisandro Martinez at the heart of the Manchester United defence. Diogo Dalot and Luke Shaw should continue as the two full-backs, with David de Gea starting between the sticks. 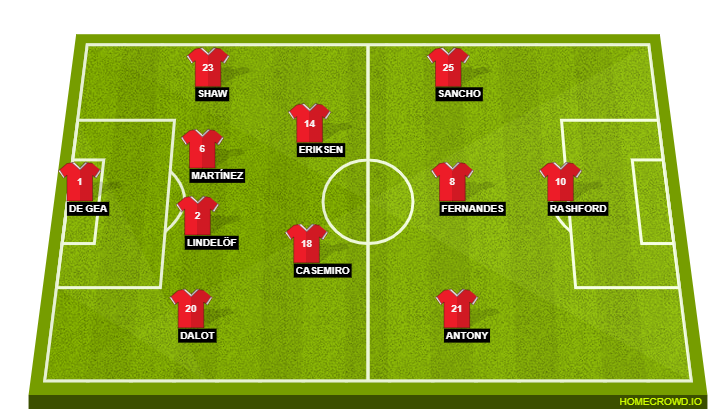 Like Manchester United, Sheriff Tiraspol will go to Old Trafford with a setback on the team news front. The Moldovan outfit will have one player missing in the UEFA Europa League clash. That player is Armel Zohouri, who saw red against Real Sociedad two weeks ago.

Dumitru Celeadnic has recently usurped Maksym Koval and should retain his spot between the sticks. Sheriff should line up in a 3-4-3 formation in front of Celeadnic against Manchester United, even though the system has not yielded the best results.

Gaby Kiki, Stjepan Radeljic, and Patrick Kpozo should forge the central defensive unit, with Renan Guedes and Heron being the two wing-backs. Heron and Guedes will often drop deep to form a back five and deny Manchester United any space to exploit.

Mudasiru Salifu will shore things up in the middle of the park, looking to keep a lid on Bruno Fernandes. Cedric Badolo will provide defensive support to Salifu while looking to push Sheriff forward during transitions. Finally, Felipe Vizeu will spearhead the attack against Manchester United, with Iyayi Atiemwen and Rasheed Akanbi being the two wide men. 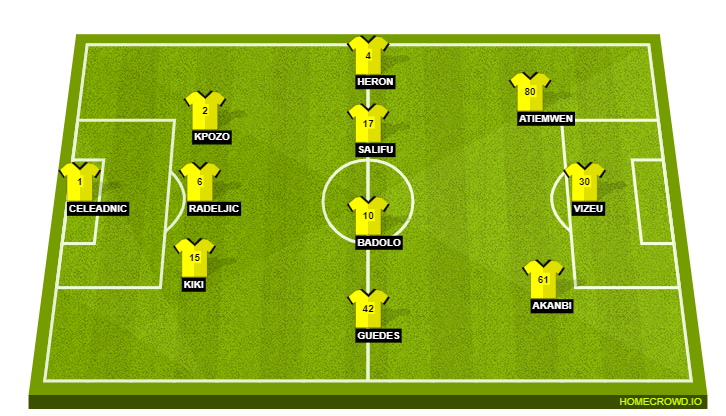 Cristiano Ronaldo is a viable shout for the section. But Victor Lindelof takes the cake here, as he will likely start against Sheriff Tiraspol on Thursday. And with Harry Maguire unlikely to be fit enough to start, the Swede has the perfect opportunity to nail down his spot as the first-choice centre-back till Raphael Varane returns.

Lindelof has produced some decent cameos this season, and he was solid against Chelsea this past weekend. Sheriff Tiraspol will provide an easier test. But Lindelof can not rest easy, as Harry Maguire will be waiting for the first instance to reclaim his spot in the team.

Manchester United deserved more than a point against Chelsea this past weekend. And losing Raphael Varane was an even bigger blow for Erik ten Hag. But the Dutch tactician will look to set things right again this week, starting with a crucial UEFA Europa League clash.

Stjepan Tomas’s resignation would have been a hammer blow for Sheriff, and they will arrive at Old Trafford bereft of confidence and sharpness. Manchester United should take advantage of that and duly claim three points. The Hard Tackle predicts a run-of-the-mill affair for the Red Devils, who should secure a 2-0 win.