Liverpool will hope to continue building momentum when they take on Nottingham Forest at the City Ground on Saturday.

The games continue to come thick and fast as we close in on the 2022 FIFA World Cup. Gameweek 13 of the 2022/23 Premier League season will commence on Saturday. And the action will kick off at the City Ground, where Nottingham Forest will play hosts to a resurgent Liverpool.

Nottingham Forest had a busy summer transfer window, with the Tricky Trees bringing in more than a dozen players. But that has not had the desired effect for Steve Cooper, with his team rock-bottom in the Premier League. The hosts have won just one game, scoring seven times and letting in 23 goals. So the problem lies on both ends of the pitch despite the heavy investment.

On the other hand, Liverpool’s summer business paled in comparison to Nottingham Forest’s in terms of volume. But like their hosts, the Reds have endured an underwhelming start to the 2022/23 season. Jurgen Klopp would have wanted his team to be challenging for the Premier League title again, but they are languishing in seventh in the standings. However, results have picked up lately, including the 1-0 win over Manchester City last weekend.

Liverpool beat Nottingham Forest 1-0 the last time the teams locked horns at the City Ground, in the FA Cup this year. The Hard Tackle takes a closer look at the encounter ahead of the latest meeting between the two sides.

Steve Cooper has a new injury concern hampering his preparations ahead of the visit of Liverpool. On Saturday, the Nottingham Forest manager could be bereft of the services of as many as six first-team players.

Cooper is mainly sweating over the fitness of Renan Lodi, with the Brazilian recovering from an ankle sprain. Meanwhile, the latest absentee is Harry Toffolo, who sustained a hamstring injury against Brighton & Hove Albion on Tuesday. Omar Richards (leg), Jack Colback (back), Lewis O’Brien (illness), and Moussa Niakhate (hamstring) remain on the sidelines.

Dean Henderson will retain his place between the sticks. And the Manchester United loanee will be desperate to get one up on Liverpool this weekend. Nottingham Forest will line up in a 4-3-3 formation in front of the English international.

Steve Cook and Scott McKenna will pair up at the heart of the Nottingham Forest defence. And Neco Williams will move to his favoured right-back slot if Lodi is fit to start. Otherwise, the former Liverpool defender will feature as a left-back, with Serge Aurier continuing on the right flank.

Orel Mangala and Ryan Yates will aim to provide the forward thrust from the middle of the park on Saturday. But the two box-to-box midfielders will also give defensive support to Remo Freuler, who will be at the base.

Jesse Lingard has been underwhelming since joining Nottingham Forest. And the English attacker will drop to the bench against Liverpool, with Emmanuel Dennis replacing him. That will mean that Brennan Johnson will move to the left side of the Nottingham Forest attack, with Dennis leading the line. Finally, Morgan Gibbs-White will complete the offensive unit. 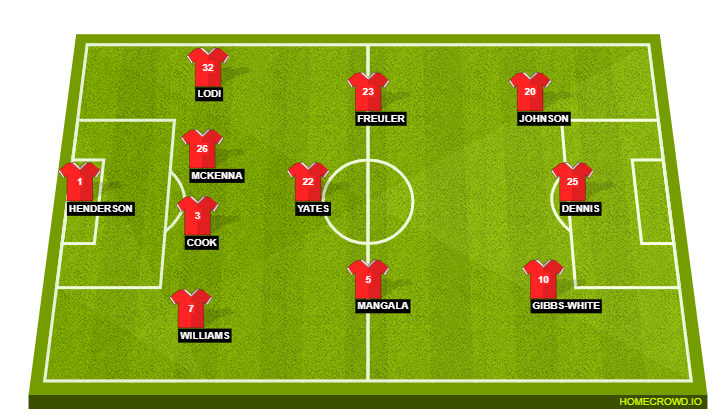 Like his counterpart in the Nottingham Forest dugout, Jurgen Klopp has several injury concerns hampering his preparations ahead of the trip to the City Ground. The Liverpool manager could be without as many as seven first-team players on Saturday.

Klopp is sweating over the fitness of Darwin Nunez, who sustained a minor hamstring issue on Wednesday against West Ham United. But the Uruguayan international might be fit enough to make the matchday squad at the very least.

However, none of the other players in the treatment room will be available to take on Nottingham Forest. So Ibrahima Konate (knock), Joel Matip (calf), Naby Keita (thigh), Arthur (hamstring), Luis Diaz (knee), and Diogo Jota (calf) remain on the sidelines.

Alisson Becker picks himself between the sticks, with Liverpool lining up in a 4-4-2 formation in front of him. Joe Gomez and Virgil van Dijk will form the central defensive pairing again, with Trent Alexander-Arnold and Andrew Robertson continuing as the full-backs. The wide duo will be desperate to regain form and perform at their usual exceptional levels soon.

The formation change has benefitted many players, one of them being Mohamed Salah. And the Egyptian attacker will likely move into the strike partnership, with Nunez dropping to the bench. Klopp cannot take any more chances with his squad’s fitness, so Roberto Firmino and Salah will pair up in the front.

Harvey Elliott will take up the vacated spot on the right wing, with Fabio Carvalho continuing on the left flank. Thiago Alcantara has been a huge positive for Liverpool lately. And the Spanish international will look to provide the creative impetus from the middle of the park. Meanwhile, Fabinho will sit deep and look to orchestrate the play. 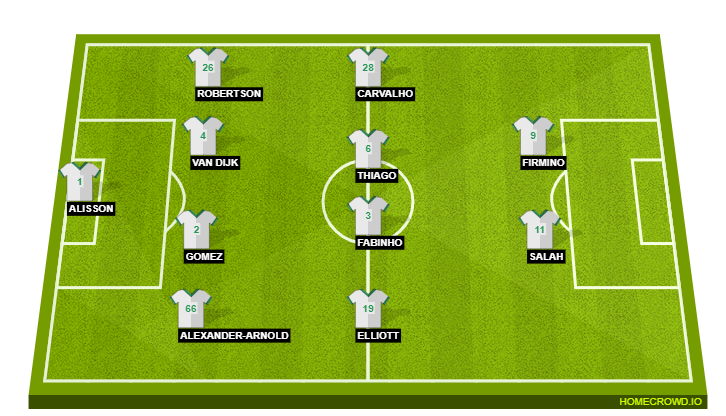 Roberto Firmino has been one of the surprise packages for Liverpool this season. While no one could have ever doubted the Brazilian international’s work rate, his output in the final third had scaled down massively in the last two seasons. But he has bounced back in emphatic fashion this season.

Only Mohamed Salah has found the back of the net more often than Firmino this season. But the 31-year-old has a better “goals per 90” average. Meanwhile, with the player entering the final year of his contract, several European bigwigs are showing interest in him. So Firmino will be eager to prove his team that he deserves a new contract with another top-notch display.

Nottingham Forest are enduring the longest current winless run in the Premier League, drawing three games and losing six times since beating West Ham United 1-0 in August. The hosts have failed to score on five occasions in this run and conceded 21 goals. So the signs point towards a Liverpool win on Saturday.

Meanwhile, the Reds have failed to win all their away games this season. But Saturday’s outing seems the perfect opportunity to break the duck. Roberto Firmino has picked up form, while Mohamed Salah and Darwin Nunez have shown positive signs. And the visitors should battle away to their first away win this term. The Hard Tackle predicts a 2-0 victory for Jurgen Klopp’s men.