Premier League leaders Arsenal host Liverpool on Sunday, hoping to extend the gap at the top of the table with victory at the Emirates.

Arsenal climbed to the top of the table after a comprehensive win against north London rivals Tottenham Hotspur, and they will be full of confidence heading into the contest against Liverpool.  The Gunners have picked up seven wins from eight Premier League matches so far, and Mikel Arteta will demand a big performance against Liverpool this weekend.

Meanwhile, Liverpool a currently ninth in the Premier League table, having made a disastrous start to the new season. Jurgen Klopp’s men have won just two of their seven Premier League matches and are in danger of missing out on European qualification if they do not get their campaign back on track soon.

The Reds have suffered multiple injury issues, and new signing Darwin Nunez has not been able to hit the ground running either. It will be interesting to see if Liverpool can improve on their recent performances and grind out a morale-boosting victory at the Emirates.

A win over league leaders Arsenal can certainly transform their spirits and give them some much-needed confidence boost. Liverpool have enjoyed great success against Arsenal in recent seasons, but the two sides are in completely different situations now and the Gunners will undoubtedly be the favourites heading into the game.

💬 "We have to show those opponents that we have reached the level and we are ready to compete against them."

🗣 Mikel, speaking to the press ahead of tomorrow's fixture against Liverpool 👇

Arsenal will be without the services of Emile Smith Rowe and Mohamed Elneny due to injuries. Other than that, Mikel Arteta has a fully-fit squad and is likely to pick his strongest eleven against Liverpool.

The Gunners are likely to continue in their usual 4-2-3-1 formation, with Aaron Ramsdale starting in goal. Ben White is set to feature as the right-back. William Saliba has been exceptional for Arsenal this season, and the Frenchman is set to continue as the centre-back alongside Gabriel Magalhaes. Summer signing Oleksandr Zinchenko will continue as the left-back.

In the midfield, Granit Xhaka will partner with Thomas Partey. Both players have been outstanding in their recent outings, and they will be expected to close down the Liverpool midfield and win the ball back for their side. Furthermore, Xhaka seems to have added a goal-scoring edge to his game, and his long passing ability could hurt Liverpool in transitions.

In the wide areas, Gabriel Martinelli and Bukayo Saka have been outstanding for Arsenal, and the two are expected to start here as well. Martinelli has one of the best dribbling success rates in the Premier League this season, and he could cause all sorts of problems for an inconsistent Trent Alexander-Arnold.

Meanwhile, Gabriel Jesus has hit the ground running since his move from Manchester City, and he will lead the line for Arsenal here with Martin Odegaard in the attacking midfielder role behind him. 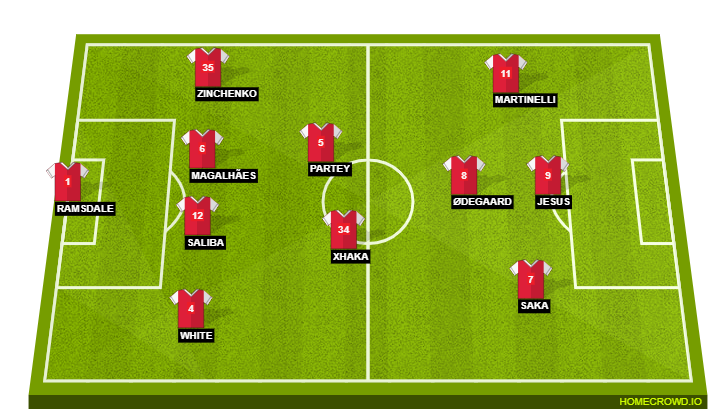 Liverpool will be without Naby Keita, Alex Oxlade-Chamberlain and summer signing Arthur, with the trio still on their way back to full fitness. Andrew Robertson missed out due to an injury last time out and could sit this one out as well.

Jurgen Klopp changed his setup against Rangers during midweek, and it will be interesting to see whether the Reds decide to field a 4-4-2 against Arsenal. Alisson Becker has been one of the most consistent performers for Liverpool this season and is set to start in goal.

Trent Alexander-Arnold produced an impressive performance against Rangers, and he is set to start as the right-back. Kostas Tsimikas will continue in the left-back position in the absence of Robertson. Joel Matip and Virgil van Dijk will operate at the heart of the Liverpool defence.

In the midfield, captain Jordan Henderson is likely to partner Fabinho, with Mohamed Salah and Luis Diaz operating as out-and-out wingers.

Darwin Nunez started against Rangers and impressed with his performance despite the fact that he did not score a goal. The Uruguayan could be handed a start here again alongside Roberto Firmino who was exceptional against Brighton. 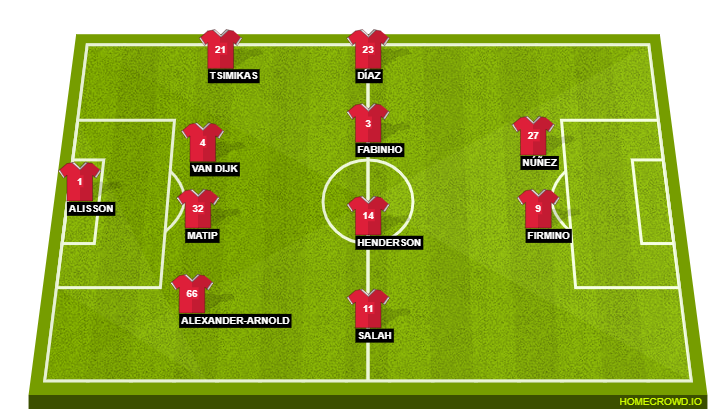 The Arsenal winger has been in sensational form this season, and he has harassed opposition defenders with his pace, agility and flair. Martinelli will be up against an inconsistent Liverpool right-back in the form of Alexander-Arnold who has struggled defensively.

The England international is low in confidence and could be in all sorts of trouble coming up against the talented young Brazilian. Martinelli, a hot property in the transfer market, is likely to get a lot of space, especially with the lack of cover for Alexander-Arnold. And he can be a defining player for Arsenal.

The Gunners are at the top of the table after eight games, and it is evident they are full of confidence and momentum right now. The north Londoners have played some excellent attacking football this season, and they will be up against a struggling Liverpool side.

While the Reds boast an excellent head-to-head record against Arsenal in recent seasons, anything other than a home win seems unlikely this weekend. The Hard Tackle predicts a keenly-contested affair that might end in a 3-1 Arsenal win.