Netherlands will look to remain perched atop the UEFA Nations League A Group 4 when they take on Poland at the National Stadium in Warsaw on Thursday.

The final international break of the year is here, as the national teams aim to continue preparing for the 2022 FIFA World Cup. The UEFA Nations League will resume in Europe, and the Netherlands will hope to remain atop Group A4 when they lock horns with Poland at the National Stadium in Warsaw on Thursday night.

Poland started 2022 strongly, winning two of the first three games scheduled in 2022, with one of those victories earning them a spot at the 2022 FIFA World Cup. But they have struggled in the latest UEFA Nations League edition, managing four points from as many games thus far to sit behind the Netherlands and Belgium in the Group A4 standings.

Like Poland, the Netherlands will feature in the 2022 FIFA World Cup after sealing automatic qualification last year. The Oranje will likely head into the big tournament in Qatar unbeaten in Louis van Gaal’s latest stint as the head coach. This run of results includes three wins in four Nations League games thus far, taking them to the top of Group A4.

Poland and Netherlands have already faced off once in the current UEFA Nations League edition, with the Dutch national team twice coming from a goal down to hold the White and Red to a 2-2 draw. Ahead of the latest meeting between the two sides, The Hard Tackle takes a closer look at the encounter.

Czeslaw Michniewicz has made widespread changes to the squad he had picked for the summer international break, with 13 players missing the cut this time. Matty Cash, Kamil Jozwiak, and Jacek Goralski are the notable absentees for Poland, with some, like Cash, unavailable due to fitness issues.

Michniewicz used the 5-3-2 formation in the defeat to Belgium in June but should stick to his tried and tested 4-2-3-1 setup against the Netherlands instead of experimenting again, with relegation to the UEFA Nations League B possible.

Wojciech Szczesny picks himself between the sticks, with Jan Bednarek and Kamil Glik likely pairing up at the heart of Poland’s defence. Jakub Bereszynski and Arkadiusz Reca should be the two full-backs, with the duo providing the width in the final third.

As for the midfield unit, Grzegorz Krychowiak is enjoying a renaissance at the international level and will likely line up alongside Karol Linetty in the double pivot. Piotr Zielinski should be the third midfielder for Poland, with the 28-year-old providing the creative impetus for the attackers.

Nicola Zalewski and Szymon Zurkowski will be the two wide attackers for Poland, with the duo expected to veer infield more often than not to support the central striker. Poland captain Robert Lewandowski will spearhead the attack against the Netherlands, with Arkadiusz Milik and Krzysztof Piatek being the backup offensive options for the hosts. 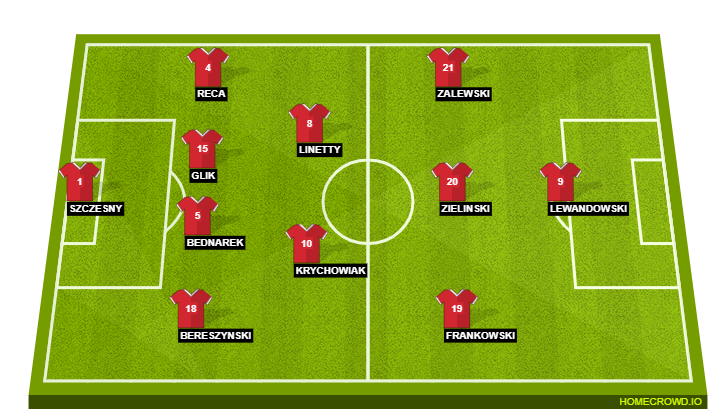 Unlike his counterpart in the Poland dugout, Louis van Gaal has not made a raft of changes to his squad heading into the latest international break. But while the Netherlands’ head coach has not omitted over a dozen players, he has still dropped a few stars due to fitness issues or poor form.

Hans Hateboer and Noa Lang are the notable absentees for the Netherlands, with Georginio Wijnaldum missing out due to a long-term injury. Louis van Gaal has preferred a formation with a back three since returning as the Dutch national team’s head coach, and he should line his side up in a 3-5-2 against Poland.

Jasper Cillessen will likely take his spot between the sticks on Thursday, with Matthijs de Ligt, Virgil van Dijk, and Stefan de Vrij forming the central defensive unit. But Jurrien Timber is also an option if van Gaal is swayed by de Vrij’s substandard form at the club level.

Frenkie de Jong will pull the strings for the Netherlands from the middle of the park, with Teun Koopmeiners and Steven Berghuis supporting the 25-year-old. Berghuis will often take up advanced positions on the pitch, although he will also provide defensive support to the other two midfielders.

The two wing-backs, Denzel Dumfries and Tyrell Malacia, will provide the width in the absence of wingers in the 3-5-2 formation. But the Cody Gakpo and Memphis Depay, who will likely form the strike partnership for the Netherlands against Poland, will also move wide at times to stretch the opposition defence. 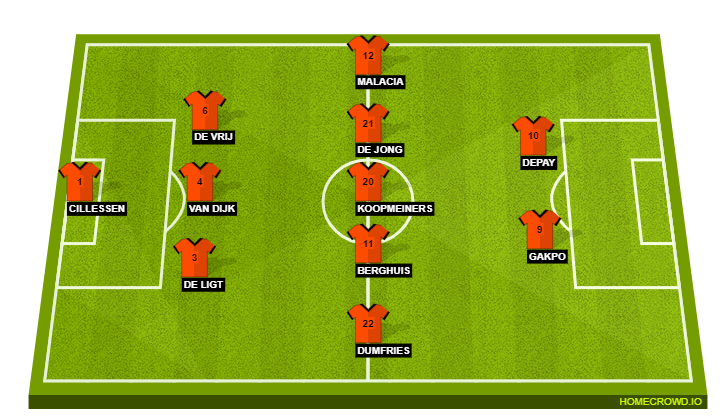 Memphis Depay is enduring a trial by fire at the club level after falling down the pecking order at FC Barcelona under Xavi Hernandez’s tutelage. The 28-year-old is now a bit-part player for the Blaugrana, although he has garnered a few minutes in the past week.

But his status as the Netherlands’ talisman remains undisputed, although he needs to utilise the two games during the international break to build some sharpness ahead of the 2022 FIFA World Cup. With minutes likely to come at a premium while representing Barcelona, Depay, who often revels for the Netherlands, should be determined to make his mark against Poland.

Poland might have a chance to drop to the UEFA Nations League B at the end of the group stage this month. But the Netherlands cannot take Czeslaw Michniewicz’s side lightly, considering Robert Lewandowski has been in tremendous touch for Barcelona in the past month.

However, Poland’s defensive unit is vulnerable and might give Memphis Depay and Cody Gakpo several opportunities to trouble Wojciech Szczesny. That might be Poland’s undoing in the end, and The Hard Tackle predicts Louis van Gaal to continue his superb run as the Dutch national team’s head coach for the third time by guiding his side to a 2-1 win.