Borussia Dortmund will aim to continue the perfect start to the 2022/23 season when they welcome Werder Bremen to the Signal Iduna Park on Saturday.

The 2022/23 season is in full swing, with Matchday 3 kicking off in the Bundesliga this weekend. Borussia Dortmund and Bayern Munich are going toe to toe in the early stages of the campaign, and the Black and Yellows will aim to keep pace with the reigning champions when they play hosts to Werder Bremen at the Signal Iduna Park on Saturday.

Edin Terzic has taken charge at Borussia Dortmund, with the team experiencing the new manager bounce at the onset of the 2022/23 campaign. The Black and Yellows have won all three games thus far this term, including their opening two Bundesliga fixtures. But they have not been too fluent thus far, scoring only four goals.

On the other hand, Werder Bremen’s first season back in the Bundesliga has been reasonably solid in the early stages. Ole Werner’s men currently sit in the tenth spot in the standings after playing out two draws in as many games thus far, scoring and conceding four goals apiece.

Borussia Dortmund came from a goal down to beat Werder Bremen 4-1 the last time the teams clashed at the Signal Iduna Park. Ahead of the latest meeting between the two sides, The Hard Tackle takes a closer look at the encounter.

Edin Terzic does not have many pressing roster issues to contend with ahead of the visit of Werder Bremen. On Saturday, the Borussia Dortmund manager will be without four first-team players, with Sebastien Haller unavailable indefinitely due to his health issue and Tom Rothe recovering from a hip injury.

The other two absentees are Karim Adeyemi (toe) and Niklas Sule (muscle), with the duo likely to be fit to start next weekend. In addition, Mateu Morey and Giovanni Reyna will likely miss out as they continue to regain full fitness following their recoveries from their respective fitness issues.

Terzic will line Borussia Dortmund in a 4-2-3-1 formation, with Gregor Kobel starting between the sticks. Thomas Meunier picks himself in the right-back slot in Morey’s absence, with Raphael Guerreiro set to start on the opposite flank. Mats Hummels and Nico Schlotterbeck should form the central defensive partnership again in Sule’s absence.

Mahmoud Dahoud and Jude Bellingham have forged a solid central midfield pairing, and the duo will be pivotal figures for Dortmund and Werder Bremen. Meanwhile, Marco Reus should reprise his usual no. 10 role, hoping to pull the strings for his side along with Bellingham.

Thorgan Hazard and Donyell Malen pick themselves as the two wide attackers for Borussia Dortmund, with Terzic’s options limited in the final third. Anthony Modeste should lead the line for the Black and Yellows against Werder Bremen, despite Youssoufa Moukoko’s top-notch display against SC Freiburg last weekend. 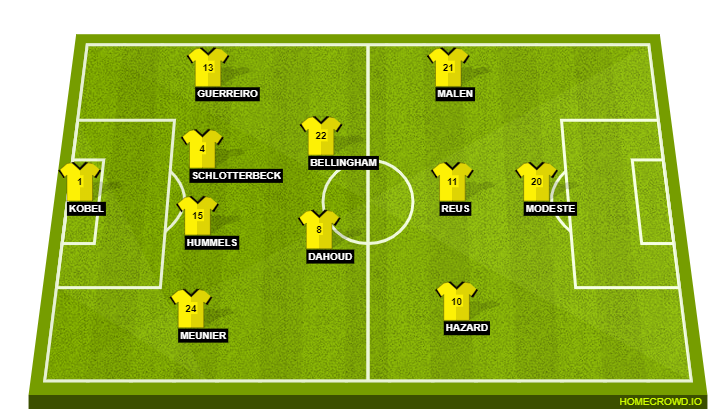 Like his counterpart in the Borussia Dortmund dugout, Ole Werner does not have any new injury concerns hampering his preparations ahead of the trip to the Signal Iduna Park. The Werder Bremen will be without three first-team players on Saturday.

Jean Manuel Mbom (Achilles) and Dikeni Salifou (abductor) remain on the sidelines due to their respective fitness issues. In addition, Eren Dincki might miss the trip to take on Borussia Dortmund because of a lack of match fitness.

?️ Ole Werner on the squad:

"Amos Pieper and Marvin Ducksch are definitely fit. Only Manuel Mbom and Dikeni Salifou are still out injured. Everyone else is available for selection."#werder pic.twitter.com/NUS6gSrWD8

Werner will line Werder Bremen in a 3-5-2 formation, with Jiri Pavlenka taking his spot between the sticks. Captain Marco Friedl will start in the central defensive unit along with Milos Veljkovic and Amos Pieper, with Niklas Stark missing out against Borussia Dortmund.

The two wing-backs will be pivotal for the visitors as they will provide the width and creativity from the flanks. Mitchell Weiser and Anthony Jung will start on the two wings, with the duo flanking Leonardo Bittencourt, Christian Gross, and Jens Stage in the middle of the park.

Bittencourt will be the creator-in-chief for Werder Bremen, with the 28-year-old linking up with the two wing-backs to set up the bulk of the chances against Borussia Dortmund. Niclas Fullkrug and Marvin Ducksch will form the strike partnership, with the former being the in-form player for the visitors. 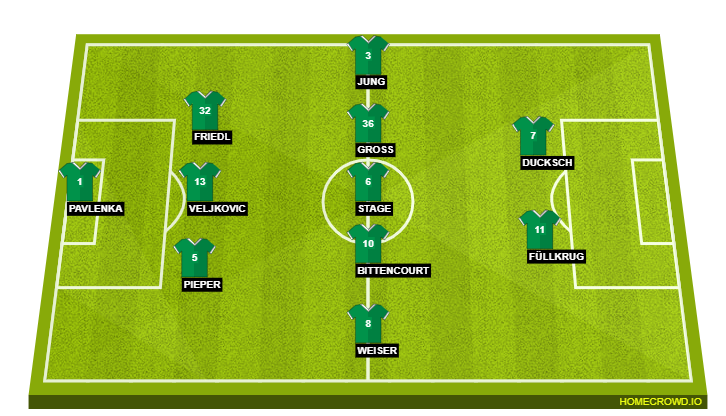 Marco Reus and Youssoufa Moukoko have been superb thus far this season, but Thomas Meunier will be under the spotlight against Werder Bremen. The Belgian international has established a foothold at Borussia Dortmund, overcoming his fitness issues to become the undisputed first-choice right-back.

But amid widespread rumours linking him with Barcelona, he might have had his head turned by the interest from the Blaugrana. Werder Bremen will be a tricky opponent for Borussia Dortmund, and Meunier will need to be at his best despite the interest from Barcelona to ensure Edin Terzic’s charges retain the synergy to continue on their winning ways.

Werder Bremen might have just returned to the Bundesliga after one season in the second division. But the visitors have shown in the first two Bundesliga games that they are no pushovers and will give most teams a run for their money. So Borussia Dortmund cannot be complacent, even though they will play at home on Saturday.

Niclas Fullkrug’s scintillating form at the start of the season should continue, with the 29-year-old finding the back of the net. But Marco Reus and Youssoufa Moukoko should be the game changers for Borussia Dortmund, ensuring a hard-fought win for the hosts on Saturday.