Italy will hope to book their place at the 2022 FIFA World Cup when they take on Northern Ireland at Windsor Park on Monday.

The first round of the FIFA World Cup 2022 Qualifiers is culminating on Tuesday, and there is still a lot to be decided when it comes to automatic qualification to the finals. Italy will have the chance to finally confirm their place in the main tournament in Qatar when they lock horns with Northern Ireland at Windsor Park in a Group C tie on Monday night.

Northern Ireland have not had a memorable qualifying campaign for the 2022 FIFA World Cup, winning only two of their seven games. That essentially means that third place is the best they can do, with Italy and Switzerland both seven points clear and vying for the top two spots in Group C.

On the other hand, Italy have wobbled a fair bit following their triumphant UEFA Euro 2020 campaign, with the Azzurri winning just two of their six games since. Three of these winless results have come in FIFA World Cup 2022 Qualifiers, with each of those being draws. As a result, Roberto Mancini & co. have been unable to create any headway between them and Switzerland heading into the final matchday.

The reverse fixture, played at the Ennio Tardini Stadium in March, saw Italy eke out a 2-0 win over Northern Ireland, with Domenico Berardi and Ciro Immobile on target. Ahead of the latest meeting between the two sides, The Hard Tackle takes a closer look at the encounter.

? We put the big question to the skipper as he looks ahead to tomorrow's clash against Italy! ? #GAWA pic.twitter.com/2GSG6N62Qf

Ian Baraclough does not have any fresh injury concerns hampering his preparations ahead of the visit of Italy. So, the Northern Ireland head coach will name his strongest possible starting lineup on Monday.

The home side will line up in their usual 3-5-2 formation, with Bailey Peacock-Farrell taking his place in goal. In front of him, the three-man central defensive unit will be spearheaded by senior statesman Jonny Evans, who will have Craig Cathcart and Paddy McNair being his partners.

Midfield will hold the key for Northern Ireland, with captain Steven Davis being handed the responsibility of keeping things tight in the middle of the park. Davis will receive defensive support from George Saville and Ali McCann.

McCann will also look to provide the forward thrust from the midfield, looking to link up with Josh Magennis and Conor Washington. Magennis and Washington’s aerial prowess will come into play in the game in the attacking phases, with wing-backs Jamal Lewis and Stuart Dallas tasked with providing accurate deliveries from the flanks. 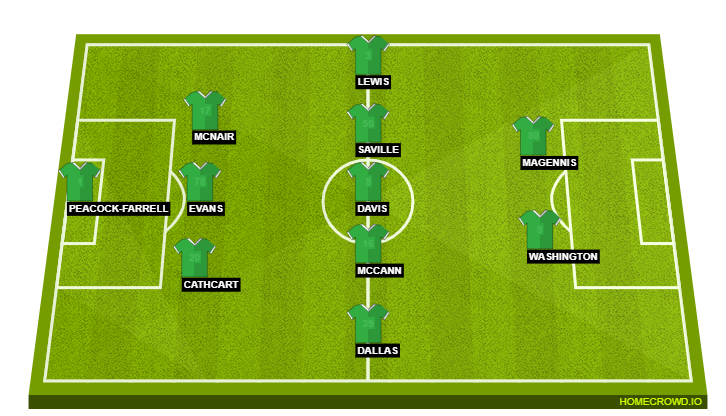 Unlike his counterpart in the Northern Ireland dugout, Roberto Mancini has a few key players unavailable for the trip to Windsor Park. Some of the notable absentees for Italy are captain Giorgio Chiellini, Lorenzo Pellegrini and star striker Ciro Immobile.

In Immobile’s absence, the onus of leading the line for Italy against Northern Ireland will fall on the shoulders of the experienced Andrea Belotti. The 27-year-old will be supplemented by Federico Chiesa and Lorenzo Insigne in the final third, with the two wide men providing a direct threat from the flanks.

Like his counterpart in the Northern Ireland side, Mancini will hand the major responsibilities in the game to his midfielders. Jorginho will sit at the base of the midfield trifecta, looking to direct play from a deep-lying position. Manuel Locatelli and Nicolo Barella will be his partners in the middle of the park, with the duo providing the creative impetus.

As far as defence is concerned, Francesco Acerbi will be stationed at the heart of Italy’s backline in the absence of Chiellini, with stand-in skipper Leonardo Bonucci pairing up with him. Out wide, Giovanni Di Lorenzo and Emerson Palmieri should be the two full-backs who will carry a major threat in the final third. Finally, in goal, there is no looking past Gianluigi Donnarumma. 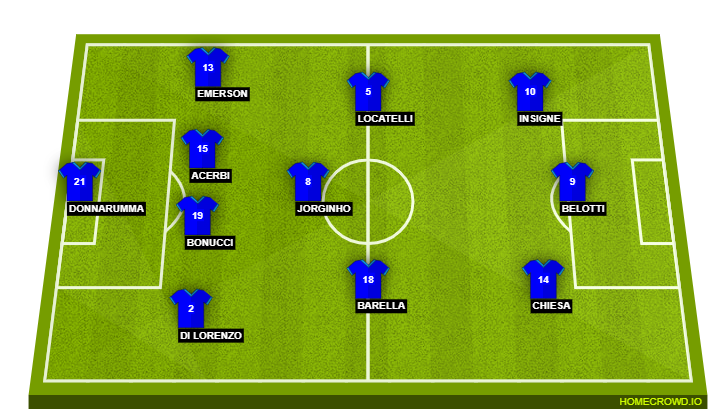 Ciro Immobile has unmistakably been Italy’s leading man for quite some time. So, it goes without saying that his absence is a major blow for the Azzurri heading into a must-win game wherein there will barely be a margin of error. Hence, the pressure will be on Andrea Belotti to deliver the goods.

The 27-year-old has oddly been off his best touch for a while and he will have the chance to set the record straight in one of the biggest games of his career. With Lorenzo Insigne and Federico Chiesa also not in full flow, it will be up to Belotti to step up and make his opportunity count against Northern Ireland.

Northern Ireland do not have anything but pride to play for, and teams can be extremely dangerous in such a setting. However, Italy have been at their colossal best on their travels while being the second-most frugal defensive unit overall in the FIFA World Cup 2022 Qualifiers in Europe.

Going forward, Italy have not been in full flow, but Andrea Belotti will feel he has a point to prove, which will bring the best out of him on Monday. With that in mind, The Hard Tackle predicts the 27-year-old to play a leading role in a 2-0 win over Northern Ireland at Windsor Park, in a result that will help them book their place at Qatar 2022.