Liverpool will aim to extend their unbeaten start to the 2021/22 season when they take on Watford at Vicarage Road on Saturday.

The dreaded international break is behind us and this weekend heralds the return of league action, with Gameweek 8 of the 2021/22 Premier League season kicking off on Saturday. The lunch-time kick-off on the day will be played in the capital, as Watford play hosts to Liverpool at Vicarage Road.

Watford have made a typically unstable start to a league campaign, even though they have not been all that poor on the pitch. The Hornets have won two of their opening seven games, which has left them four points clear of 18th-placed Burnley. However, despite kicking off their season better than expected, Xisco Munoz has been relieved of his duties, with Claudio Ranieri taking charge in his stead.

Liverpool, on the other hand, are the only English team yet to be beaten in the 2021/22 season. In the Premier League, the Reds have won four and drawn three of their opening seven games, though two of those stalemates have been played against Chelsea and Manchester City. And ahead of the latest round of fixtures, Jurgen Klopp & co. are just a point adrift of the Blues in second place.

Watford were shock 3-0 winners the last time they hosted Liverpool in a Premier League game, back in March 2020, handing the Merseyside giants their first defeat of the 2019/20 season en route to winning the title. Ahead of the latest meeting between the two sides, The Hard Tackle takes a closer look at the encounter.

Great to see you, @etebo_karo ?

The road to recovery continues! ??? pic.twitter.com/5E3j4ub4Xp

Claudio Ranieri does not have any fresh roster issues hampering his preparations ahead of the visit of Liverpool. On Saturday, the Watford manager could have to make do without as many as five first-team players.

Among the five absentees, Joshua King will be the first player to return to action, with his knee injury only being a minor one. Apart from the Norwegian striker, the likes of Christian Kabasele (hamstring), Francisco Sierralta (thigh) and Peter Etebo (hamstring) continue to miss out while new signing Nicolas N’Koulou will only be fit to play in three weeks’ time.

Ranieri could line his side up in a 4-2-3-1 formation, with Ben Foster taking his customary place in goal. At the heart of the Watford defence, Craig Cathcart ought to have William Troos-Ekong for company while Jeremy Ngakia and Danny Rose should be the two full-backs.

Up ahead in midfield, Moussa Sissoko and Juraj Kucka will have the onus on them to stifle Liverpool during their build-ups, keeping a check on their opposite numbers. Ozan Tufan will be the third midfielder for Watford, with the Turkish international reprising the no. 10 role and providing the creative impetus higher up the pitch.

The key man for Watford will invariably be Ismaila Sarr, who has also been linked with a potential move to Liverpool lately. Ken Sema will likely be deployed on the left flank while Sarr will take his place on the right wing. Finally, Emmanuel Dennis will lead the line for the Hornets against Liverpool. 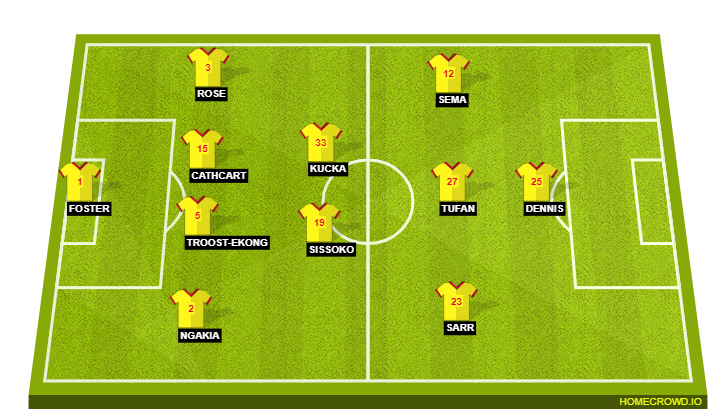 Jurgen Klopp has greeted a mixed bag of updates on the team news front ahead of the trip to Vicarage Road to take on Watford. On Saturday, the Liverpool manager could be bereft of the services of as many as five first-team players.

The big news comes in the form of the absence of Alisson Becker and Fabinho, who are missing the trip to Watford after representing Brazil in the latest international break. However, Diogo Jota and Trent Alexander-Arnold are fit to take on the Hornets after recovering from their respective fitness issues.

That leaves Curtis Jones (groin), Thiago Alcantara (calf) and Harvey Elliott (ankle) as the only other injury players on the sidelines, with Jones picking up a minor issue while on international duty with the English under-21 side.

The absence of Jones, Thiago, Elliott and Fabinho leaves Klopp on his bare bones as far as midfield options are concerned. That means Jordan Henderson, Alex Oxlade-Chamberlain and Naby Keita pick themselves as the three midfielders against Watford, with Oxlade-Chamberlain, in particular, getting a rare chance to impress.

Up ahead in attack, Roberto Firmino ought to reprise his usual false nine role, with Klopp unlikely to risk Jota unless absolutely necessary. Mohamed Salah and Sadio Mane will be the two wide men, with Mane on the verge of completing 100 Premier League goals.

At the back, Alexander-Arnold should be back as the right-back, with Andrew Robertson set to be deployed on the left flank. At the heart of the Liverpool defence, Joel Matip and Virgil van Dijk are certainties while Caoimhin Kelleher will be stationed in goal in the absence of Alisson. 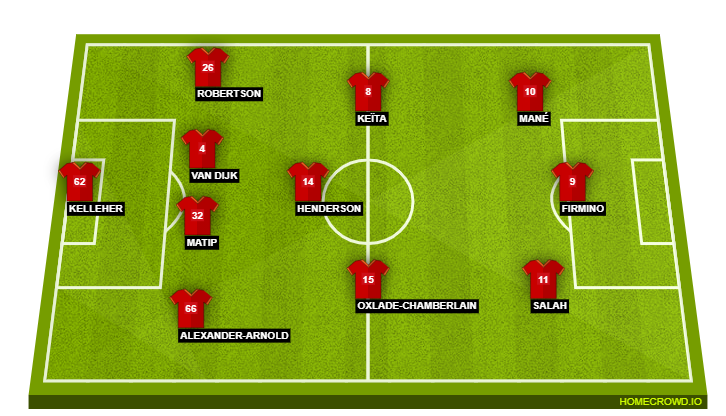 It goes without saying that Kelleher is in a bit of a predicament at Liverpool. While he is rated highly, the Irish goalkeeper has little chance of usurping Alisson Becker at the moment, meaning he will not be getting too many chances to make an impression while at Liverpool.

However, against Watford, such a rare opportunity is set to be presented to Kelleher, who will start in goal for Liverpool in the absence of Alisson Becker. And with a solid display, he could attract a few suitors to swoop him away on loan in the January transfer window. A big chance for the 22-year-old to impress.

Claudio Ranieri could really not have asked for a worse game to kick-start his reign as the Watford manager. Liverpool might have drawn nearly half of the games they have played but they are easily the most fearsome attacking unit in the Premier League at the moment, with Mohamed Salah flying high right now.

So, it is set to be a baptism of fire for Ranieri, with Salah and Sadio Mane set to run rampant. And as iterated earlier, the Hornets have failed to score a goal in any of their four league defeats this season. That record ought to continue on Saturday, with The Hard Tackle predicting a 3-0 win for Jurgen Klopp & co.