Manchester United will be desperate to return to winning ways when they take on Leicester City at the King Power Stadium on Saturday.

Club football is back after a gap of nearly two weeks, with the international break done and dusted. In the Premier League, Gameweek 8 of the 2021/22 season will kick off on Saturday, as Liverpool lock horns with Watford. The most eye-catching fixture on the day will be played at the King Power Stadium, where Leicester City will play hosts to Manchester United.

Leicester City have been uncharacteristically slow at the onset of the 2021/22 season, with Jamie Vardy and Kelechi Iheanacho the only player who have really managed to impress. In the Premier League, the Foxes are tottering at 13th on the table, having won just two of their opening seven games so far, and have been victorious in just one of their last seven in all competitions.

Manchester United, on the other hand, have been struggling a fair bit after a reasonably strong start to the season, despite making some big signings in the summer transfer window. The Red Devils have won just two of their last six games across all competitions. A 1-0 defeat to Aston Villa was followed by a 1-1 draw against Everton last time out, leaving the Red Devils fourth, two points adrift of Manchester City.

The corresponding fixture last season saw Leicester City twice come from a goal down to play out a 2-2 draw with Manchester United. Ahead of the latest meeting between the two sides, The Hard Tackle takes closer look at the encounter.

Brendan Rodgers has received a mixed bag of updates on the team news front ahead of the visit of Manchester United. On Saturday, the Leicester City manager could be bereft of the services of as many four first-team players.

The major absentee for Leicester will be Wilfred Ndidi, who misses out due to a hamstring injury sustained against Burnley. James Justin (knee) and Wesley Fofana (leg) are long-term absentees for the Foxes, although the former is closing in on his return. The fourth and final issue pertains to Jonny Evans, who has been recovering from a foot issue lately.

However, the former Manchester United defender has taken part in training ahead of the game this weekend, meaning he has overcome the Plantar Fasciitis issue enough to be on the verge returning to action. If passed fit, Evans ought to line up at the heart of the Leicester City defence, with Caglar Soyuncu set to be his partner.

Out wide, Ricardo Pereira and Ryan Bertrand ought to be the two full-backs, with Kasper Schmeichel taking his customary place in goal. Up ahead in midfield, Boubakary Soumare should fill the void left by the absence of Ndidi, with Youri Tielemans being his central midfield partner.

Kelechi Iheanacho’s recent performances warrant a start for him, meaning Leicester will likely line up in a 4-4-2 formation, with Iheanacho starting alongside Jamie Vardy. Ademola Lookman and Harvey Barnes will be the two wide men, who will provide the forward thrust in the final third, leaving James Maddison on the bench. 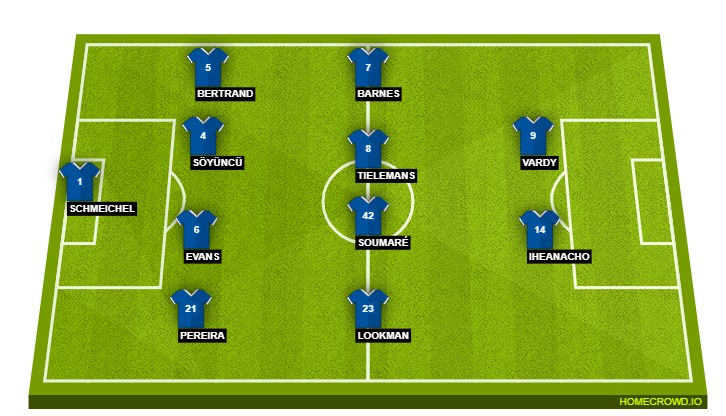 Like his counterpart in the Leicester City dugout, Ole Gunnar Solskjaer has had a mix of good and bad news to greet ahead of the trip to the King Power Stadium. On Saturday, the Manchester United manager will have to make do without at least four first-team players.

The big blow comes in the form of Raphael Varane’s absence, with the French defender sustaining a groin injury while on France duty. In addition, Fred and Edinson Cavani will play no part for Manchester United against Leicester after representing Brazil and Uruguay, respectively, during the international break, meaning they will not be able to return in time to be match ready.

The good news, meanwhile, comes in the form of Marcus Rashford’s availability, with Solskjaer confirming that he will be involved. In addition, Harry Maguire is in with a chance to feature as well, although it is likely that the Manchester United captain will only return in the midweek UEFA Champions League fixture against Atalanta.

So, with Maguire and Varane set to miss out, Eric Bailly and Victor Lindelof ought to pair up at the heart of the Manchester United defender, with Aaron Wan-Bissaka and Luke Shaw being the two full-backs. In goal, there is no looking past David de Gea, who has been largely inspired early in the 2021/22 season.

Up ahead in midfield, Fred’s absence could prompt Solskjaer to deploy Paul Pogba in the double pivot, with Scott McTominay shouldering the bulk of the defensive responsibility. Pogba, who is coming off winning the UEFA Nations League with France, will be the creative supremo for the visitors.

Bruno Fernandes will reprise his usual no. 10 role, with Mason Greenwood once again taking up the right wing slot. On the left flank, Jadon Sancho could get a chance to impress after faring well for England this past week. Finally, Cristiano Ronaldo will lead the line for Manchester United against Leicester, especially with Cavani unavailable. 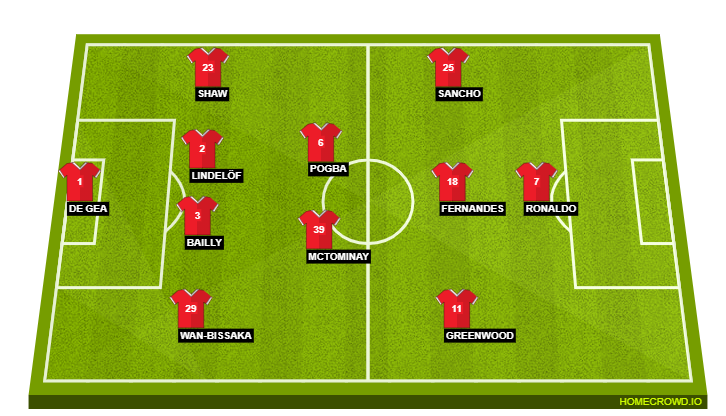 All eyes will once again be on Cristiano Ronaldo while the return of Marcus Rashford will be awaited with bated breaths. The form of Jamie Vardy and Kelechi Iheanacho also makes them potential game changers.However, Victor Lindelof is the player to watch out for in this game.

Indeed, with Harry Maguire unlikely to start and Raphael Varane ruled out, Lindelof will have a lot of responsibility on his shoulders as the senior centre-back. That Varane could be missing a fair chunk of games ahead of the next international break means Lindelof has to deliver consistently, starting with the game against Leicester.

This one is set to be another close contest between Manchester United and Leicester City. Brendan Rodgers seems to have had the measure of Ole Gunnar Solskjaer lately, but the Foxes are in the midst of a difficult run of form. And while United are not exactly flying high, they should exploit the weaknesses that their hosts have shown of late at the back.

Cristiano Ronaldo will also be raring to go after being relegated to the bench to begin with against Everton last time out. The veteran forward was on fire for Portugal this past international break and he ought to leave his mark on the game on Saturday, which is why The Hard Tackle is going for a 2-1 win for Manchester United here.