Manchester United will hope to reclaim top spot in the Premier League table when they take on West Ham United at the London Stadium on Sunday.

Gameweek 5 of the 2021/22 Premier League season will culminate on Sunday, with three games on show on the day. One of the two lunch-time kick-offs will take place in the capital, as West Ham United play hosts to Manchester United, in a game that could end of the two teams’ unbeaten runs in the top-flight.

West Ham have been largely solid at the start of the 2021/22 season, providing early signs that their exploits last term were not a fluke. While the Hammers have been held to two frustrating draws in as many games, they still remain one of five clubs who are yet to be beaten in the Premier League. Most recently, David Moyes & co. beat Dinamo Zagreb in the UEFA Europa League.

Manchester United, on the other hand, have gone some way in proving their credentials as Premier League title contenders, having won three of their first four games to sit atop the table at the start of Gameweek 5. However, the Red Devils come into the weekend clash against West Ham on the back of a disappointing performance that saw them getting beaten 2-1 by BSC Young Boys in the UEFA Champions League.

The corresponding fixture last season saw Manchester United come from a goal down to beat West Ham 3-1, with Paul Pogba, Mason Greenwood and Marcus Rashford scoring to negate the strike by Tomas Soucek. Ahead of the latest meeting between the two sides, The Hard Tackle takes a closer look at the encounter.

?️ | David Moyes, in embargoed quotes released after the #GW5 deadline: "Said [Benrahma] got a knock on the knee when he came on [against Dinamo Zagreb] but apart from that, we are mostly fully available."#FFScout #FPL #WHUFC #FPLCommunity pic.twitter.com/jFoyEp932E

David Moyes has a couple of pressing roster issues hampering his preparations ahead of the visit of Manchester United. On Saturday, the West Ham United manager will be bereft of the services of two first-team players in the worst case scenario.

The major absentee for the hosts is Michail Antonio, who is suspended after being sent off last week against Southampton. In addition, Said Benrahma could miss out for West Ham after sustaining a knock in the midweek UEFA Europa League tie versus Dinamo Zagreb.

The potential absence of Benrahma could prompt Moyes to hand a full Premier League debut for West Ham to Nikola Vlasic, who will reprise the no. 10 role. Vlasic’s inclusion would mean Pablo Fornals will be deployed on the left flank, with Jarrod Bowen starting on the right wing. Meanwhile, in Antonio’s stead, Andriy Yarmolenko could lead the line against Manchester United.

The rest of the starting lineup pretty much picks itself, including the double pivot of Declan Rice and Tomas Soucek. The central midfield duo will have the onus on them to keep things tight in the middle of the park, frustrating Manchester United’s creative duo of Bruno Fernandes and Paul Pogba.

At the back, Kurt Zouma and Angelo Ogbonna will form the central defensive partnership, with Vladimir Coufal and Aaron Cresswell being the two full-backs. Finally, in goal, there is no looking past Lukasz Fabianski. 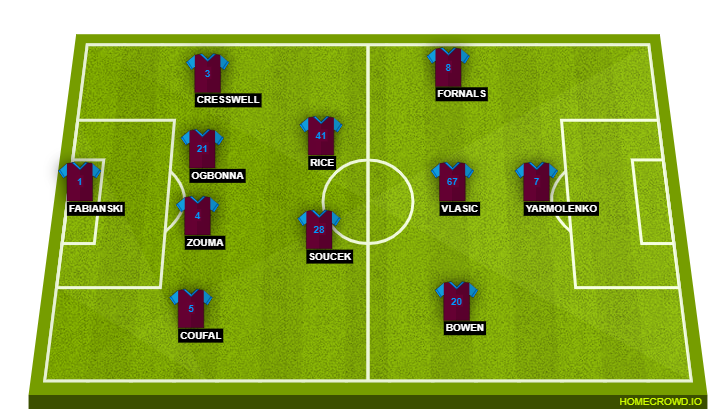 Unlike his counterpart in the West Ham United dugout, Ole Gunnar Solskjaer does not have any fresh injury concern to deal with ahead of the trip to Old Trafford. However, the Manchester United boss will still have to make do without as many as six first-team players.

Marcus Rashford is inching his way back to returning to action after resuming training this week. In addition, the likes of Alex Telles (ankle), Phil Jones (match fitness), Scott McTominay (groin), Amad Diallo (hamstring) and Edinson Cavani (knock) all remain sidelined as well.

David de Gea is a certainty in goal for Manchester United despite the return of Dean Henderson. In front of the Spaniard, Manchester United will line up in a 4-2-3-1 formation, with Raphael Varane returning to the side to pair up with Harry Maguire at the heart of the defence, Out wide, there is no looking past Aaron Wan-Bissaka and Luke Shaw.

Up ahead in midfield, Solskjaer could be well served by fielding Donny van de Beek alongside Fred in the double pivot following a promising showing against Young Boys. However, the Manchester United manager will likely give the nod to Paul Pogba, with van de Beek missing out again.

With Pogba being used in the middle of the park, Jadon Sancho will get another chance to impress, this time from the left flank, with Mason Greenwood returning on the right wing. Bruno Fernandes will reprise his usual no. 10 role, with Cristiano Ronaldo spearheading the Manchester United attack against West Ham. 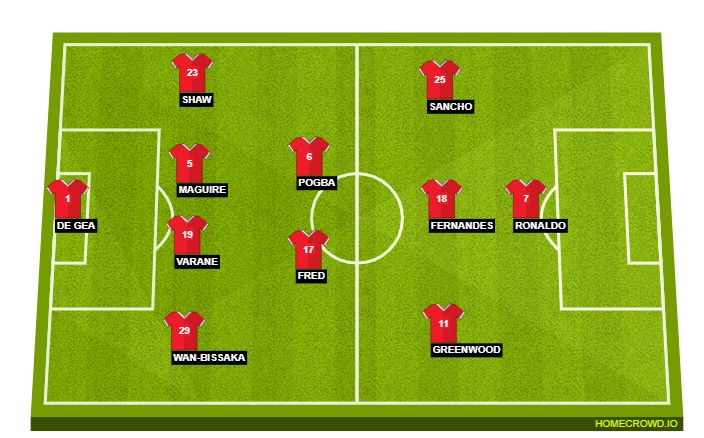 Whenever Manchester United take the field now, the spotlight will invariably be on Cristiano Ronaldo, with Bruno Fernandes and Paul Pogba also being key players. However, one player who has been delivering the goods on a consistent basis and deserves his fair share of the spotlight is Mason Greenwood.

His performances have helped Manchester United to some important points early in the season and his absence on Tuesday robbed the Red Devils of their X-Factor. Set to return to the starting lineup on Sunday, Greenwood’s directness and dangerous runs will give Manchester United the edge, even if slightly so, to grab all three points.

This is a game that could be too close to call, especially with Declan Rice being in a brilliant run of form. Manchester United, though, have the advantage over West Ham United owing to Michail Antonio’s suspension as well as the fact that Said Benrahma could perhaps be unavailable as well.

However, the Red Devils tend to concede cheap goals a few too many times, which will keep West Ham in the game. In the end, though, Mason Greenwood and Cristiano Ronaldo ought to be the difference makers for Manchester United, who will continue their tremendous unbeaten away run in the Premier League.