West Ham United will be hoping to keep their top four hopes alive when they take on Brighton & Hove Albion at the Amex Stadium on Saturday.

The games are coming thick and fast all across Europe and in the Premier League, we are witnessing at least one game on a daily basis. On Saturday, three matches will be on show as part of Gameweek 36, with the action on the day culminating at the Amex Stadium, where Brighton & Hove Albion will play hosts to West Ham United.

Brighton & Hove Albion have been one of the more eye-catching, yet solid teams in the Premier League this season, even if their position on the table does not necessarily reflect that. The Seagulls are 17th in the standings, with their finishing letting them down big time this term. Nevertheless, Graham Potter’s men are in the top-flight for another season, although they have won just one of their last six outings.

West Ham United, on the other hand, have been pleasantly surprising with their enterprising displays this term under David Moyes, who has galvanized the East London club. The Hammers are currently sixth on the table and in desperate need of a win to keep their top four hopes alive, seeing as they trail fourth-placed Chelsea by five points, though their recent run has been underwhelming – three defeats in four.

The reverse fixture, played at the London Stadium back in December, saw West Ham twice come back from a goal down to hold Brighton to a 2-2 draw. Ahead of the latest meeting between the two sides, The Hard Tackle takes a closer look at the encounter.

? Having a tightknit group has played a massive part in Albion securing their @premierleague status for the 2021/22 campaign, according to Graham Potter.#BHAFC ?⚪ pic.twitter.com/yEFoi6hGZy

Graham Potter has a number of pressing roster issues hampering his preparations ahead of the visit of West Ham United. On Saturday, the Brighton & Hove Albion manager could be bereft of the services of as many as seven first-team players.

The major absentee for the hosts  is Lewis Dunk, who is suspended after being sent off last weekend against Wolverhampton Wanderers. Like the Brighton captain, Neal Maupay will be serving the first of his two-match ban, while the likes of Solly March (knee), Tariq Lamptey (hamstring), Joel Veltman (calf), Davy Propper (ankle) and Adam Lallana (calf) miss out as well.

Some of Potter’s selection could, thus, be forced upon him, with Ben White dropping into the back three to start alongside Adam Webster and Dan Burn. In goal, there is no looking past Robert Sanchez, who has been largely excellent for Brighton this season.

Up ahead in midfield, Yves Bissouma, who continues to be linked with the who’s who of European football, will likely have Alexis Mac Allister for company in the double pivot, with Mac Allister providing the forward thrust. Out wide, Pascal Gross and Alireza Jahanbaksh could be the two wing-backs, as Potter continues to shuffle his troops.

The onus, though, will be on Leandro Trossard to carve out the openings while also look for scoring opportunities in the final third, with Danny Welbeck also having a lot of responsibility high up the pitch. Meanwhile, Maupay’s absence will see Andi Zeqiri make a rare start for Brighton. 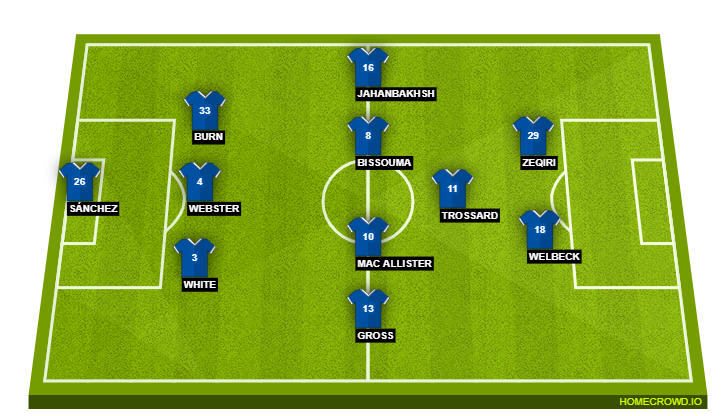 Unlike his counterpart in the Brighton & Hove Albion dugout, David Moyes has largely greeted positive news ahead of the trip to the Amex Stadium. On Saturday, the West Ham United boss might only have to make do without three first-team players

The major positive update comes in the form of Declan Rice likely being available to take on Brighton. The English international ought to return to the midfield double pivot, where he will line up alongside Tomas Soucek in a dynamic double pivot, with the latter also making late runs into the Brighton box.

Aaron Cresswell could also be available for West Ham after sustaining a dead leg last time out. The English full-back should take his place on the left side of the West Ham defence, with Vladimir Coufal a certainty on the right-hand side. Craig Dawson and Issa Diop ought to form the central defensive partnership, while Lukasz Fabianski is an automatic pick in goal.

As for the attack, Jarrod Bowen and Said Benrahma could be the two wide men, who will provide the creative impetus high up the pitch. The onus on scoring the goals, though, will be on Michail Antonio and Jesse Lingard, who will play off of the former on Saturday. 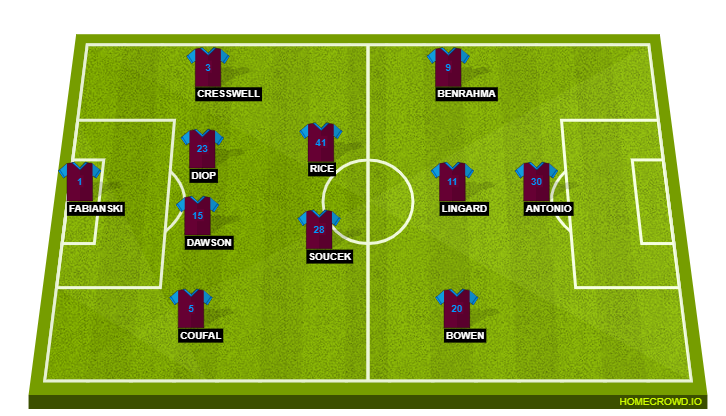 While Jesse Lingard invariably has a lot of eyeballs on him these days, and even more so after being named the Premier League Player of the Month for April, if West Ham United are to arrest their slide, they will have to look towards Michail Antonio for the goals against Brighton & Hove Albion.

Indeed, Lingard has suffered a slight dip in form and with Antonio being in superb touch against Burnley 10 days ago, he will need to rediscover his best levels in order to inspire West Ham to a crucial win. A big game beckons the 31-year-old and his West Ham teammates against Brighton.

West Ham United have dropped the ball lately and their momentum seems to have been sapped almost entirely. Sunday’s game would likely be more of the same for the Hammers, whose UEFA Champions League hopes will then be done and dusted, with Brighton & Hove Albion providing a big test of their credentials. The Hard Tackle, therefore, predicts a 1-1 draw in this one.