AC Milan will be eager to bounce back to winning ways and consolidate their place atop Serie A when they face Torino at San Siro on Saturday.

The action continues to be incredibly relentless in a packed season, with Matchday 17 of the 2020/21 Serie A season beginning this weekend. Three matches are on show on Saturday and the proceedings on the day will end at San Siro, where AC Milan will be playing hosts to Torino.

AC Milan have been the pacesetters in Serie A this season, having been the table-toppers pretty much for the entirety of the campaign so far. A tricky December, though, saw them drop points a couple of times, allowing Inter Milan to close in slightly.

The Rossoneri, though, suffered their first major blow of the season earlier this week, with reigning Serie A champions Juventus handing them a 3-1 defeat – their first this term. Fortunately for Milan, neighbours Inter, who are second in the standings, also dropped all three points, courtesy a 2-1 loss at Sampdoria, meaning they successfully retained their place atop the table.

Torino, on the other hand, were slow off the blocks at the onset of the season, which has seen them being mired in the relegation dogfight. However, Marco Giampaolo’s men are presently on a four-match unbeaten run, which has seen them double their points tally and climb out of the drop zone. Having said that, 18th-placed Parma are level on points with them, meaning the Granata hardly have any margin for error.

The corresponding fixture last season saw AC Milan eke out a narrow 1-0 over Torino, courtesy a 25th-minute strike by Ante Rebic. Ahead of the latest meeting between the two sides, The Hard Tackle takes a closer look at the encounter.

Stefano Pioli just cannot seem to catch a break on the team news front and the hits just keep on coming for him. Ahead of the visit of Torino on Saturday, the AC Milan manager is sweating over the availability of as many as six first-team players, leaving just about every department depleted.

The major absentee for the hosts continues to be Zlatan Ibrahimovic, who is inching closer to his return from a calf injury but is still some way off being available. Apart from the AC Milan talisman, Pioli is also without the likes of Matteo Gabbia (knee), key midfielder Ismael Bennacer (thigh) and Alexis Saelemaekers (thigh), while Rade Krunic and Ante Rebic are self-isolating after contracting COVID-19.

The absence of Rebic has compounded the effects of Ibrahimovic’s unavailability, meaning Hakan Calhanoglu and Rafael Leao have a lot of responsibility on their shoulders to carry the bulk of the responsibility in the final third. Calhanoglu will have the freedom to roam and look for teammates in pockets of spaces, pulling the strings higher up the pitch.

Leao, on the other hand, will be the central striker but will also drop deep often in order to bring his fellow forwards into the game. As for the two wide men, Samu Castillejo and Brahim Diaz should start, with the duo supporting Calhanoglu in providing the creative impetus in the final third. There is some good news, though, for Milan when it comes to the midfield selection.

While the absence of Bennacer has been telling, Pioli can at least rest easy to some extent knowing that he has Sandro Tonali back at his disposal after he missed the game against Juventus due to a suspension. Tonali will pair up with Franck Kessie in the double pivot, with the Ivorian being the enforcer in the middle of the park while the young Italian will set the tempo of the game.

Tonali’s return means Davide Calabria can return to his usual right-back slot, with Diogo Dalot dropping to the bench. Calabria and fellow full-back Theo Hernandez will be tasked with providing the width higher up the pitch, with the latter even searching for scoring opportunities. At the heart of the AC Milan defence, Simon Kjaer and captain Alessio Romagnoli are certainties while Gianluigi Donnarumma will be stationed in goal. 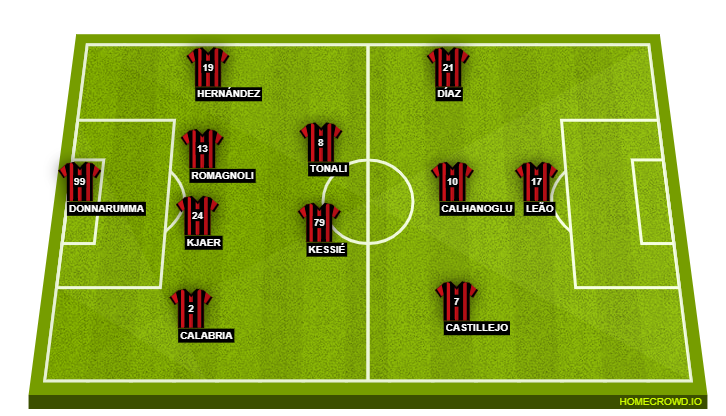 Unlike his counterpart in the AC Milan dugout, Marco Giampaolo is not being bogged down by any roster issue whatsoever. On Saturday, the Torino manager will have a full-strength squad at his disposal.

The former AC Milan boss will set Torino up in his trademark 3-5-2 formation, with Salvatore Sirigu the obvious choice between the sticks. In front of him, Armando Izzo, Lyanco and Gleison Bremer, who has recently been linked with Liverpool, will form the three-man central defensive unit.

The trio will look to remain compact, seeing as Torino will form a back five in the defensive phase, with Lyanco playing the sweeper role. While in possession, though, the two wing-backs – likely to be Wilfried Singo and former AC Milan defender Ricardo Rodriguez – will be in charge of providing the width, whipping in the crosses from the flanks.

The duo will flank Sasa Lukic, Tomas Rincon and Karol Linetty, with the trio aiming to nip the AC Milan attacks in their bud. Lukic and Linetty, though, will also have additional responsibility apart from providing defensive support, with the duo looking to provide the forward thrust from the middle of the park and linking up with the wing-backs.

Upfront, Simone Verdi and Andrea Belotti will form the strike partnership, with Verdi playing off of Belotti, who will look to play off the shoulders of the Milan centre-backs. Amer Gojak and Federico Bonazzoli will be the backup options in attack for Torino. 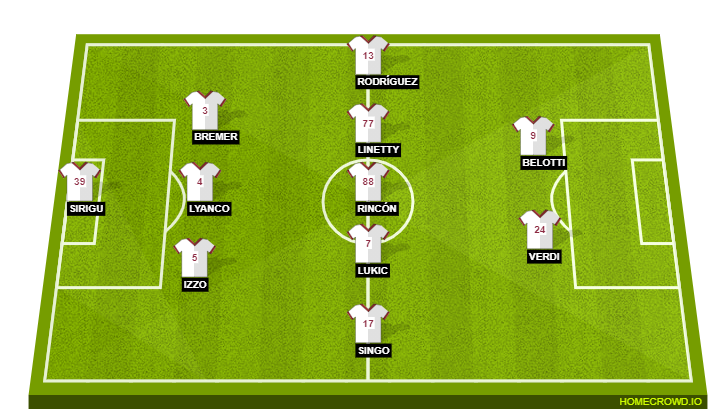 In what has been a season defined by resilience and fighting spirit, AC Milan face the biggest test yet of their character in this crunch period of fixture congestion, with a number of key players out. With attack and midfield weakened considerably, the onus will invariably be on the defence to shut out the opposition forwards as effectively as possible.

It is here where the influence of Alessio Romagnoli comes into the picture. The AC Milan captain has been a solid leader at the back all season long, but with the defence likely to come under increasing pressure, it will be up to Romagnoli to keep things tight at the back and ensure that the frailties in attack are not mounted by vulnerabilities in defence.

This will be another tough one for AC Milan. With their attack being severely depleted, Stefano Pioli needs his defence – led by Alessio Romagnoli – to come to the fore. At the same time, the pressure will also be on Hakan Calhanoglu to create opportunities galore for Rafael Leao, who has been much improved in recent weeks.

The game against Torino will also be the first instance this season when Milan will be asked to bounce back after a defeat. That being said, a team with the second-worst defensive record in Serie A is just the kind of opposition that the Rossoneri need to face, although Marco Giampaolo & co. have tightened the screws a little in their last few games.

However, Torino’s fragile defence will constantly keep AC Milan in the hunt, while Gianluigi Donarumma can be expected to be inspired between the sticks after letting in three goals last time out. The return of Sandro Tonali also hands Milan the added edge and factoring all that in, we think the hosts will narrowly eke out a 2-1 win over Torino on Saturday.