Real Madrid will hope to end 2020 on a positive note when they take on Elche at Estadio Manuel Martinez Valero on Wednesday.

It is quite odd to see a La Liga matchday at the back end of a calendar year when teams are usually given a break during the holiday period. However, such are the times we live in that we end 2020 with Matchday 16 of the 2020/21 La Liga season. Real Madrid take the field on Wednesday when they lock horns with Elche at Estadio Manuel Martinez Valero.

Elche have been reasonably impressive upon their return to La Liga after half-a-decade out in the lower divisions of Spanish football. Los Franjiverdes have lost just four games so far this term, and having played a couple of games fewer than those around them, they seem to be in a handy position despite being just a point clear of the drop zone.

Real Madrid, on the other hand, have cleaned up well following a sluggish start to the season. While Los Blancos might have played a couple of more games than leaders Atletico Madrid, who have as many points as them, they will take heart from the fact that they are comfortably clear of the rest of the chasing pack, thanks due to their five-game winning run in La Liga.

Real Madrid were 2-0 victors the last time they locked horns with Elche in a La Liga games at Estadio Manuel Martinez Valero, with Karim Benzema and Cristiano Ronaldo on target. Ahead of the latest meeting between the two sides, The Hard Tackle takes a closer look at the encounter.

Jorge Almiron does not have any fresh injury concerns hampering his preparations ahead of the visit of Real Madrid. On Wednesday, the Elche manager will be bereft of the services of just a couple of first-team players.

Omenuke Mfulu misses out yet again due to the issue that has plagued him for some time, while Diego Gonzalez might be unavailable owing to a knock. Otherwise, Almiron has a fully fit squad at his disposal and should name his strongest possible lineup against Real Madrid.

Gonzalez’s possible absence means Dani Calvo should once again pair up with Gonzalo Verdu at the heart of the Elche defence, with Antonio Barragan and Youssouf Kone being the two full-backs. In goal, there is no looking past Edgar Badia.

Up ahead in midfield, Ivan Marcone will play the Anchor Man role, looking to curb the output of Real Madrid’s creative midfielders. Raul Guti will provide defensive support to Marcone but will also take up advanced positions on the pitch.

Tete Morente will be the other attacking midfielder for Elche, with the 24-year-old being given the license to roam higher up the pitch. Josan and Fidel will be the two wide men for the hosts, while Lucas Boye will spearhead the Elche attack against Real Madrid. 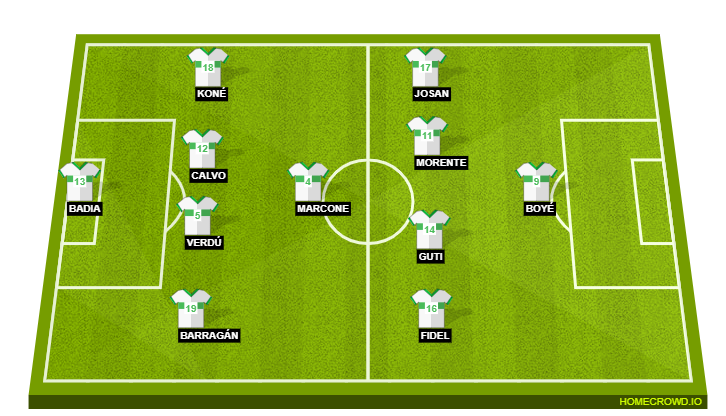 Zinedine Zidane has greeted a mixed bag of updates on the team news front ahead of his side’s trip to Estadio Manuel Martinez Valero. Against Elche on Wednesday, the Real Madrid manager will have to make do without just one first-team player.

The only absentee for Real Madrid is Rodrygo Goes, who is a long-term absentee after sustaining a hamstring injury last time out against Granada. However, Luka Modric is a part of the travelling squad after missing the previous game.

The Croat should be back in the starting lineup straightaway, coming in for Federico Valverde in the middle of the park. Modric should have Casemiro and Toni Kroos for company in the three-man midfield unit, with Valverde, Martin Odegaard and Isco being backup options.

Meanwhile, Eden Hazard is expected to continue building his sharpness against Elche, but is only likely to get minutes off the bench. As a result, Vinicius Jr. should get the nod on the left flank in the absence of the injured Rodrygo. On the right-wing, there is no looking past the in-form Lucas Vazquez, while Karim Benzema will lead the line for Real Madrid.

At the back, the first-choice quartet of Dani Carvajal, Sergio Ramos, Raphael Varane and Ferland Mendy pick themselves, with Alvaro Odriozola, Eder Militao, Nacho and Marcelo all being backup options for Zidane. Finally, Thibaut Courtois is an automatic pick between the sticks. In a season that has been far from straightforward for Real Madrid, it is Lucas Vazquez who has surprisingly been their most consistent performer. Having been asked to reprise various roles over the course of the campaign so far, the Spaniard has been professional in his displays and seems to have now made the right-wing berth his own.

Vazquez was not quite at his best last time out against Granada, but that should not keep him out of the starting lineup against Elche. With Eden Hazard still not reaching peak fitness, it will be up to the nippy winger to provide some sort of a spark in the final third and aid Karim Benzema as much as possible.

Elche might be in the lower reaches of La Liga heading into the new year, but before 2020 ends, it is important to note that they are not a team that can be overpowered easily. The fact that they have only lost four of their 13 games so far, in addition to their reasonably solid defensive record, means that Real Madrid will have their task cut out on Wednesday.

However, with Eden Hazard set to make an appearance off the bench and with Luka Modric set to return, the visitors might have the X-Factor needed to get over the line. Zinedine Zidane has made his team quite resilient and strong-headed. With that in mind, The Hard Tackle predicts a 2-0 win for Real Madrid on Wednesday.