A place in the Carabao Cup semi-finals will be on the line when Brentford welcome Newcastle United to the Brentford Community Stadium on Tuesday.

League football across England will take a small pause this midweek with the return of the Carabao Cup. The quarter-finals of the 2020/21 edition of the League Cup will be played this week, with the marquee fixture being played between Arsenal and Manchester City on Tuesday. Before that, though, the Last Eight stage will kick-off when Brentford face Newcastle United at home.

Brentford are in the League Cup quarter-finals for the first time in their history, having eliminated Premier League opposition in each of the last three rounds – Southampton, West Bromwich Albion and Fulham. The Bees are currently on a brilliant run of form, having not been beaten in any of their last 13 games, with the latest in that run being the 3-1 success against Reading.

Newcastle United, on the other hand, have been the polar opposite of Brentford in the Carabao Cup this term in terms of opposition faced, having knocked out lower league outfits in their three games thus far – Blackburn Rovers, Morecambe and Newport County. The Magpies, though, have failed to win their last two games, with the effects of the coronavirus outbreak showing its effects.

The last meeting between Brentford and Newcastle United was in 2016/17 in the Championship, with the Magpies winning both games that season. Ahead of the latest fixture pitting the two sides against each other, The Hard Tackle takes a closer look at the Carabao Cup encounter.

Thomas Frank has received a double boost for his preparations ahead of the visit of Newcastle United. In the Carabao Cup quarter-final on Tuesday, the Brentford manager will only be bereft of the services of three first-team players.

Mads Roerslev and Shandon Baptiste are long-term absentees while captain Pontus Jansson has been unable to shrug off a minor ankle complaint and misses out against Newcastle. As for the good news, Ethan Pinnock is back after serving out a one-match suspension while Christian Norgaard is available again after recovering from an ankle injury.

Pinnock should be back in the starting lineup straightaway, taking his place at the heart of the Brentford defence, with Charlie Goode being his partner. Luke Daniels will get a rare opportunity to impress in goal, with Brentford setting up in Frank’s preferred 4-3-3 formation in front of him. The full-back pairing should remain unchanged, with Tariq Fosu and Rico Henry retaining their spots.

Up ahead in midfield, Norgaard should be back in the starting lineup, sitting at the base to reprise the Anchor Man role. The Dane will receive defensive support from compatriot Mathias Jensen while Emiliano Marcondes will look to provide the forward thrust from the middle of the park.

Finally, in attack, former Newcastle striker Ivan Toney should lead the line for Brentford while also donning the armband in the absence of Jansson. Toney will be supported by Sergi Canos and Bryan Mbuemo from the flanks, with the latter carrying the X-Factor for the hosts. 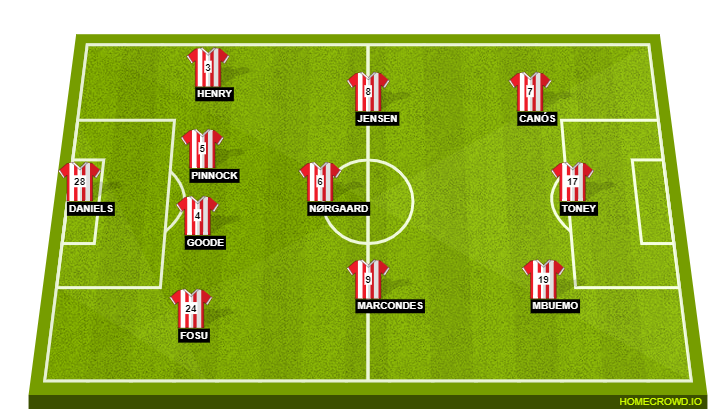 Steve Bruce has a fresh roster issue hampering his preparations ahead of the trip to Brentford for the Carabao Cup quarter-final. On Tuesday, the Newcastle United manager could be bereft of the services of as many as six first-team players.

In particular, the COVID-19 outbreak at the club has had a ravaging impact, with the likes of Javi Manquillo, Fabian Schar, Allan Saint-Maximin and captain Jamaal Lascelles all ruled out for the visitors. Meanwhile, Martin Dubravka remains unavailable as well due to his ongoing recovery from an ankle injury.

Federico Fernandez could also miss out for Newcastle against Brentford. The Argentine centre-back is struggling with fatigue, having only recently tested negative for the coronavirus. In his absence, Isaac Hayden could be set to start at the heart of the Newcastle defence, owing to their squad selection issues.

Mark Gillespie should deputise for Karl Darlow in goal, with Newcastle expected to line up in a 4-4-2 formation that Bruce has favoured lately. DeAndre Yedlin and Matt Ritchie should be the two full-backs for the Magpies, with Ciaran Clark pairing up with Hayden at the heart of the Newcastle defence.

Jacob Murphy should get a rare start out on the flanks, taking his place on the left-wing, with Ryan Fraser expected to be stationed on the right side of the Newcastle attack. Sean Longstaff and Jonjo Shelvey will likely pair up in the middle of the park, hoping to keep things tight. Finally, Dwight Gayle and Andy Carroll should form the strike partnership, with Callum Wilson and Joelinton getting a breather. 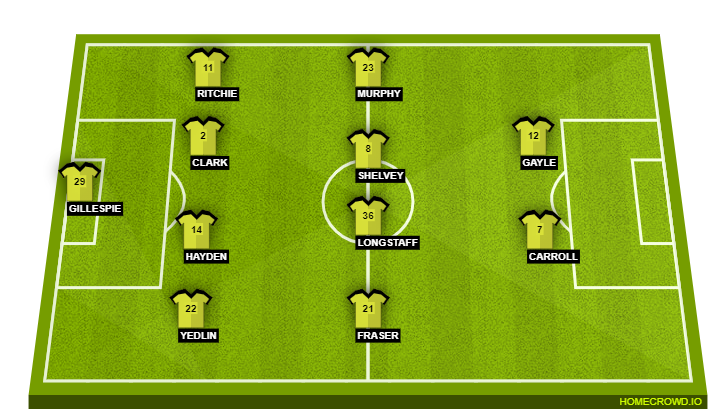 After the highs that followed the 2018/19 campaign, nothing has ever been the same for Sean Longstaff at Newcastle United. The youngster endured a difficult time last term and has not quite managed to start the current season strongly either.

The 23-year-old’s future at Newcastle also remains up in the air, with the speculation intensifying after he signed up with Pini Zahavi. However, a critical cup fixture gives Longstaff the chance to make up for the lost time and deliver the goods from the middle of the park. Will he grab his opportunity with both hands against Brentford?

Newcastle United are still feeling the effects of the recent coronavirus outbreak, and with rotations being restricted, Brentford might just fancy their chances. Stand-in captain and former Newcastle striker Ivan Toney will be raring to make an impression while the form of Bryan Mbuemo would fill Thomas Frank in with some confidence.

Having said that, the fact that a player like Callum Wilson will be an option off the bench means the Magpies have their equaliser as well. In the end, there should be very little separating the two sides, which is why we are going with a 2-2 draw between Brentford and Newcastle. The Hard Tackle, though, predicts the Steve Bruce & co. to clinch this on penalties.