Liverpool will have the chance to claim the Premier League summit on Sunday, when they take on Fulham at Craven Cottage.

The games continue to come thick and fast all across Europe, with the busy festive period nearly upon us. Gameweek 12 of the 2020/21 Premier League season will be concluded on Sunday, with five matches on show. Champions Liverpool will be in action on the day as well, when they pay a visit to Craven Cottage to take on Fulham.

Fulham have unsurprisingly been one of the strugglers in the Premier League this season so far, losing eight of the 11 games they have played since returning to the top-flight. However, of late, the Cottagers have made an impression, with their two wins till date coming in the last five matches, wherein they have become a difficult side to beat.

Liverpool, on the other hand, have found stable footing after a bit of a wobbly start to the season. The reigning Premier League champions are level on points with leaders Tottenham Hotspur, even though they are still not quite in full flow yet. The Reds’ most recent game ended in a 1-1 draw with Midtjylland in the UEFA Champions League, where they have progressed to the Round of 16.

Liverpool were 2-1 victors in this fixture the last time Fulham were in the Premier League, with Sadio Mane and James Milner on target for them, while Ryan Babel scored the only goal for the Londoners. Ahead of the latest meeting between the two sides, The Hard Tackle takes a closer look at the encounter.

Scott’s keen to see some of you back for #FULLIV! ?

Everything to come out of his presser.

Scott Parker does not have any fresh injury concerns hampering his preparations ahead of the visit of Liverpool. On Saturday, the Fulham manager will be bereft of the services of just two first-team players, with Kenny Tete (match fitness) closing in on his return, while Terence Kongolo (ankle) is a long-term absentee.

Parker has iterated that he will task his charges to take the game to Liverpool even though the Reds are expected to dominate the proceedings. Having said that, it will also be imperative for Fulham to absorb the pressure created by the Liverpool attack while charging on the counter to hurt the Reds’ vulnerable defence.

Alphonse Areola is a certainty in goal, where he will likely be kept busy by a barrage of shots. In front of him, Fulham ought to line up in a three-man central defensive unit, as they have in the last couple of games. To that end, Ola Aina, Joachim Andersen and Tosin Adarabioyo will be the three centre-backs.

Bobby Decordova-Reid has reinvented himself as a wing-back in recent weeks, and the 27-year-old will be stationed on the right side, with Antonee Robinson assuming his spot on the left flank. The unenviable task of stifling the flow of Liverpool’s moves through the middle will rest on the shoulders of Andre Frank Zambo Anguissa and Harrison Reed.

Ruben Loftus-Cheek will provide the forward thrust through the middle, occupying a free role behind the two strikers, who ought to be Aleksandar Mitrovic and the in-form Ademola Lookman, who will hope to continue his good run against Liverpool. 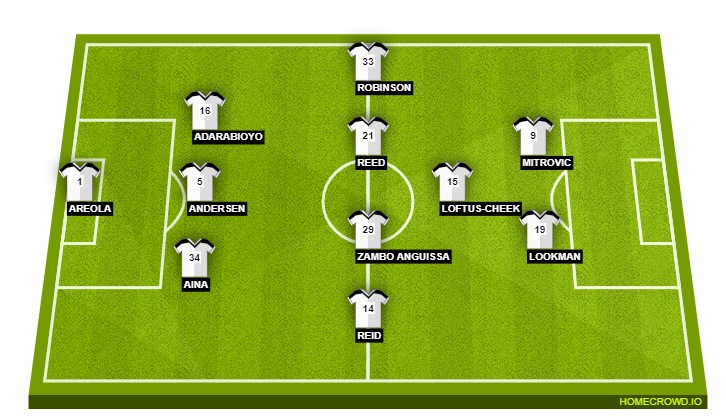 Unlike his counterpart in the Fulham dugout, Jurgen Klopp has a new fitness issues to contend with ahead of the trip to the capital. At Craven Cottage on Saturday, the Liverpool manager could have to make do without as many as eight first-team players, including Diogo Jota.

The Portuguese international, who has made such a stunning impact since joining from Wolves this past summer misses out due to a knee injury. Jota joins the likes of James Milner (hamstring), Thiago Alcantara (knee), Xherdan Shaqiri (match fitness) and long-term absentees Virgil van Dijk and Joe Gomez on the sidelines.

Kostas Tsimikas and Alex Oxlade-Chamberlain are on the verge of being available once again, but the game against Fulham might have come too soon for them. The good news for Liverpool, though, is the potential return of Alisson Becker.

As per Klopp, the Brazilian goalkeeper was set to return to training on Friday and was then likely to start if he came through it unscathed. Alisson should indeed return between the sticks, with Caoimhin Kelleher, who has been an excellent deputy in the last couple of weeks, dropping to the bench.

Klopp should recall a number of regulars he chose to give a breather in the midweek European tie, including defenders Joel Matip and Andrew Robertson. Trent Alexander-Arnold came through unscathed from the game at Midtjylland and should resume his right-back duties in the Premier League. Fabinho will join Matip at the heart of the Liverpool defence.

Up ahead in midfield, Jordan Henderson, Curtis Jones and Georginio Wijnaldum are all set to be back in the starting lineup after getting some much-needed rest last time out. Henderson will sit at the base of the three-man midfield, with Jones and Wijnaldum providing him defensive support while also looking to push Liverpool forward when they are on the ball.

Finally, in attack, there is no looking past the terrific trio of Roberto Firmino, Sadio Mane and Mohamed Salah, with Jota’s absence making Klopp’s choice in the final third much easier. Salah and Mane will be the two wide men, with Firmino reprising his typical False Nine role. 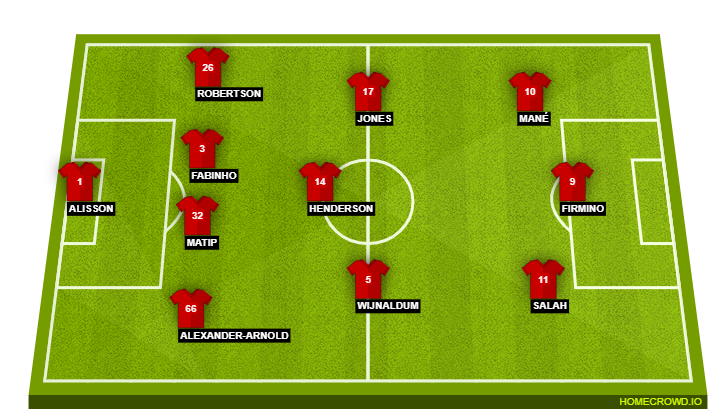 The Liverpool attack has blown hot and cold so far this season, not always reaching the heights it has scaled in the last few years. This inconsistency is best characterized by Sadio Mane, who has not quite managed to set the stage alight with his performance thus far.

Across all competitions, Mane has managed just 5 goals and 3 assists in 17 appearances. While the tally in the Premier League makes for a much better reading, it is important to note that Mane has now gone six games without finding the back of the net in the English top-flight.

The absence of Diogo Jota is likely to ease some of the pressure on him, but Mane needs to start delivering sooner rather than later. A game against a potentially vulnerable Fulham does offer him the chance to rediscover his best touch. Will Mane deliver the goods this weekend?

In recent weeks, Fulham have become a team that is hard to beat. However, a well-rested Liverpool side that is starting to greet the return of their best players week after week is an entirely different proposition than most teams the Cottagers have faced of late.

Mohamed Salah and Sadio Mane will also be licking their lips at the prospect of tormenting the Fulham defence, while Trent Alexander-Arnold will be eager to make up for lost time, when he was out on the sidelines.

Expect the Liverpool defence to be largely untroubled on Sunday, with the attacking players slowly growing into the game. To that end, The Hard Tackle predicts the defending Premier League champions to grab all three points at the end of a 4-0 win, which should see them keep pace with Tottenham Hotspur, should they win their game against Crystal Palace earlier in the day.