Barcelona will hope to extend the perfect start to their UEFA Champions League campaign when they face Ferencvaros at the Puskas Arena on Wednesday.

The penultimate matchday of the 2020/21 UEFA Champions League group stage will be concluded on Wednesday, with eight matches on show. Barcelona will be aiming to make it five wins in five when they travel to the Puskas Stadium to lock horns with Ferencvaros on Wednesday night.

Ferencvaros have unsurprisingly been unable to make a case for qualification to the Round of 16 in the Champions League . The Hungarian champions have managed just 1 point from their four games so far, but that solitary draw with Dynamo Kyiv means they have the chance to reach the Europa League depending on the result in their game and the one between Dynamo and Juventus.

For Barcelona, on the other hand, 2020/21 has been a case of two different competitions. In La Liga, the Blaugrana have been quite inconsistent and managed to win just four of the nine games they have played thus far. Meanwhile, in Europe, Ronald Koeman & co. have already amassed those many victories and have already secured a place in the knockout stages as a result.

The reverse fixture, played at Camp Nou on Matchday 1 back in October, ended in a comfortable 5-1 win for Barcelona, setting the tone for their success so far in the competition. Ahead of the latest meeting between the two sides, The Hard Tackle takes a closer look at the Champions League tie.

Serhiy Rebrov does not have many pressing injury concerns hampering his preparations ahead of the visit of Barcelona. On Wednesday, the Ferencvaros manger is only likely to be bereft of the services of one first-team player, with Eldar Civic struggling with a minor issue.

If Civic is unable to prove his fitness ahead of the game then Marcel Heister is likely to take up the left side of the Ferencvaros defence against Barcelona.On the opposite flank, captain Gergo Lovrencsics is a certainty, with Miha Blazic and Abraham Frimpong likely to form the central defensive partnership. In goal, Denes Dibusz is an automatic pick.

In front of Dibusz, Ferencvaros will line up in a 4-3-3 formation, with the onus being on Ihor Kharatin to keep things tight and deny Barcelona much room during their build-up play. David Siger and Somalia providing him defensive support while also looking to push Ferencvaros forward.

Up ahead in attack, Tokmac Nguen and Oleksandr Zubkov ought to be the two wide men, who will aim to heap the pressure on a vulnerable Barcelona defence. Finally, Franck Boli will likely lead the line for Ferencvaros. 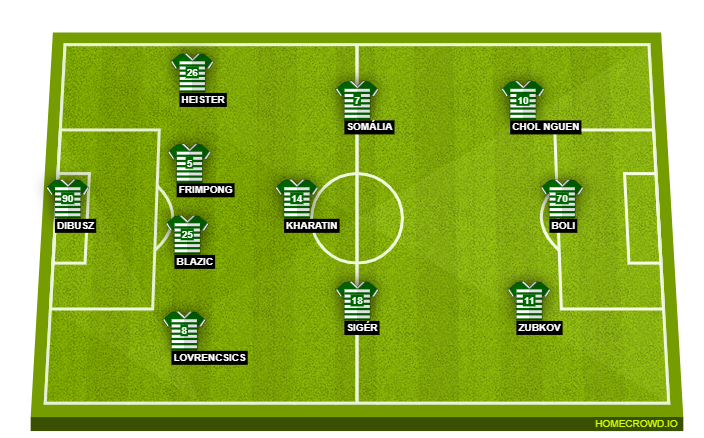 Unlike his counterpart in the Ferencvaros dugout, Ronald Koeman has a plethora of fitness issues to contend with ahead of his side’s latest fixture. On Wednesday, the Barcelona boss will have to make do without five first-team players due to injuries. In addition, Barcelona have also travelled to Budapest without three others who have been rested.

With ter-Stegen rested, Neto becomes a certainty between the sticks, with Barcelona set to line up in a 4-2-3-1 formation in front of him. Clement Lenglet has recovered from a minor ankle injury and should, therefore, start as part of the central defensive partnership, with Oscar Mingueza likely to get another chance at the back.

Sergino Dest has also shrugged off a knock and should take up the right-back slot, with Junior Firpo expected to be deployed on the left side of the Barcelona defence, so as to also provide Jorgi Alba a rest. Frenkie de Jong might come off the bench to replace Lenglet later on in the game to manage the minutes of both the players.

With that in mind, the midfield double pivot should feature Miralem Pjanic and Carles Alena, who gets another chance to impress. Up ahead in attack, a youthful creative setup should see Pedri being deployed through the middle while Francisco Trincao and Ousmane Dembele will be the two wide men. Finally, Martin Braithwaite ought to lead the line for Barcelona, having shown good form of late. 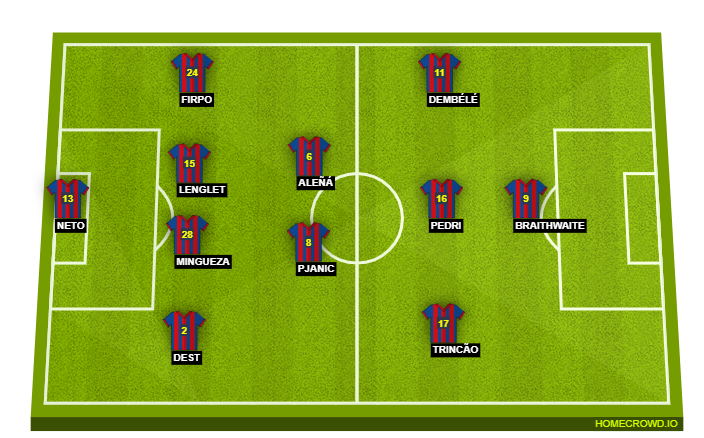 It goes without saying that Ousmane Dembele has not had it easy at Barcelona. Injuries have made him a frustrated figure at Camp Nou and the Frenchman has become a rotation option as a result; not to mention his future being thrown into uncertainty as well.

However, such games offer Dembele a chance to demonstrate his best abilities and prove that he still has a lot to offer Barcelona at the highest level. Against Ferencvaros, Dembele gets another chance to prove his credentials, having also impressed in the reverse fixture. Will the Frenchman grab this opportunity with both hands?

With Ronald Koeman set to rotate his troops, it certainly will not be an easy ride for Barcelona on Wednesday against Ferencvaros, who might fancy their chances. Having said that, the game versus Dynamo Kyiv last week showed that the Blaugrana do tend to play more freely when Koeman sends the youngsters on the field to express themselves.

The result versus Osasuna also showed that the squad could well be growing in confidence. The visitors should, therefore, carry that confidence into the match on Wednesday, with the buoyed youngster, Oscar Mingueza impressing again at the back while the attack ought to deliver as well. The Hard Tackle, therefore, predicts a 3-0 win for Barcelona over Ferencvaros.