Real Madrid will be eager to continue their unbeaten start to the season when they take on Levante at Estadio de la Ceramica on Sunday.

The games are coming thick and fast all across Europe, but the brakes are going to be slammed at the end of this weekend. Before the international break begins, though, there are plenty of matches to be played, one of which will see Levante play hosts to Real Madrid at Estadio de la Ceramica on Sunday evening.

Levante have made a slow start to their 2020/21 La Liga campaign, having managed to win just one of their three games so far. The Granotas come into the match against Real Madrid on the back of a 1-0 defeat to Sevilla earlier this week, a result that has left them 16th on the table heading into Sunday’s fixture.

Real Madrid, on the other hand, are the defending La Liga champions, having won yet another trophy under the tutelage of Zinedine Zidane last term. Los Blancos are unbeaten after their first three outings, although they have been a little wobbly till now, with an injury crisis setting them back a great deal. Nevertheless, they have a chance to enter the international break top of the table.

The corresponding fixture last season saw Real Madrid suffer a shock 1-0 loss, with Jose Luis Morales scoring the only goal of the game for Levante. Ahead of the latest meeting between the two sides, The Hard Tackle takes a closer look at the encounter.

Paco Lopez is in a pretty healthy position as far as fitness concerns within his squad are concerned. Against Real Madrid on Sunday, the Levante manager will be bereft of the services of just three first-team players, with Hernani, Cheick Doukoure and Ruben Rochina all missing out.

Otherwise, Lopez has a fully fit squad at his disposal and will line his side up in his trademark 4-4-2 formation when Real Madrid pay them a visit. Aitor Fernandez picks himself in goal and will likely be a busy man between the sticks for Levante.

Ruben Vezo and Oscar Duarte ought to pair up at the heart of the Levante defence, with Son and Tono being the full-back partnership for the hosts. Up ahead in midfield, the onus will be on Nikola Vukcevic and Nemanja Radoja to keep things tight and deny their Real Madrid counterparts any space or time on the ball.

Jose Campana and Enis Bardhi will be the two wide men, who will remain compact when Levante lose the ball before taking advanced positions when they do have possession. Finally, the Levante attack will be spearheaded by Jose Luis Morales, who will have Sergio Leon as his partner. Former Real Madrid striker Dani Gomez will have to suffice with a place on the bench. 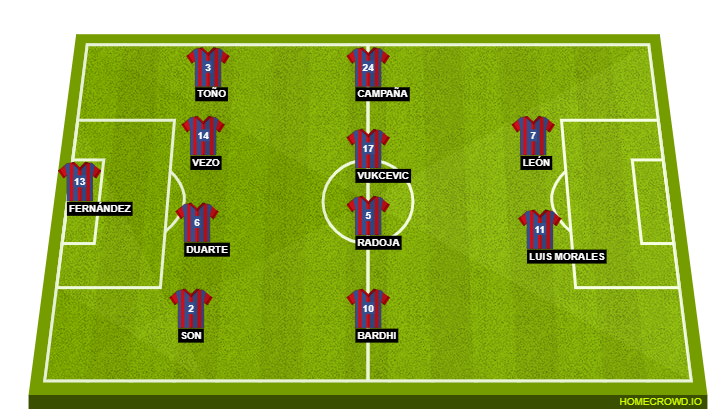 Unlike his counterpart in the Levante dugout, Zinedine Zidane has several pressing injury troubles hampering his preparations. On Sunday, the Real Madrid boss will be without as many as six first-team players.

The biggest absentee for Real Madrid is Eden Hazard, whose unfortunate tryst with ankle injuries continues. Apart from Hazard, Zidane is also bereft of the services of Dani Carvajal, Eder Militao, Alvaro Odriozola, Toni Kroos and Mariano Diaz, meaning the visitors are down to their bare bones all across the pitch.

The right-back slot, in particular, presents a lot of concern and Lucas Vazquez could be the man to deputise for Carvajal and Odriozola against Levante. On the opposite flank, Ferland Mendy should start and will hope to continue impressing Zidane. At the heart of the Real Madrid defence, Sergio Ramos and Raphael Varane will continue as their central defender partnership.

The absence of Kroos means Casemiro and Federico Valverde ought to start in the midfield double pivot, with Martin Odegaard reprising the no. 10 role. In some good news, Marco Asensio has made his recovery from a minor niggle and should be fit to start on the right flank. On the left-wing, Vinicius Jr. picks himself, while Karim Benzema will lead the line for Real Madrid. 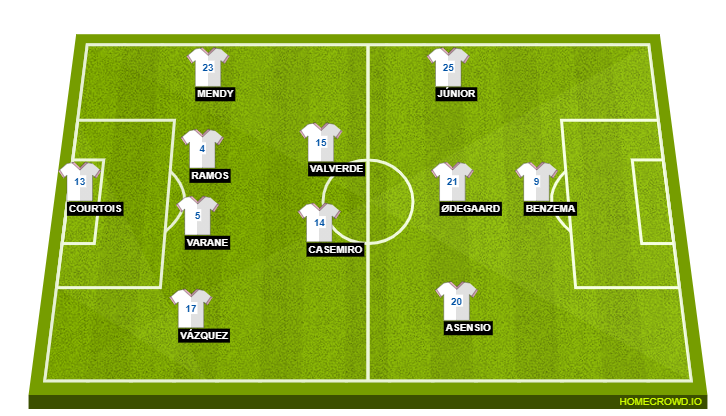 It is quite clear really. Despite his advancing age, Real Madrid remain heavily dependent on him and his goals. While Luka Jovic seems to be stepping up at the club, it is the Frenchman who will once again have much of the responsibility to produce the goods in front of goal. Will Benzema continue remaining Real Madrid’s talisman on Sunday? Only time will tell.

This is a tricky one, to say the least. Real Madrid are still not in full flow in the early days of the season; far from it, in fact. Levante, on the other hand, have blown hot and cold so far and could repeat the theme when Los Blancos pay them a visit at Estadio de la Ceramica.

That Real Madrid are missing several key players does give Levante with a glimmer of hope to spring a surprise. However, Karim Benzema & co. have enough class to outlast the Granotas, even if only just. With that in mind, The Hard Tackle predicts a 2-1 win for Zinedine Zidane & co.