Bayer Leverkusen will be looking to continue their pursuit of a top four finish when they face Werder Bremen at the Weser-Stadion on Monday.

The first round of fixtures since the return of football in Germany continues, and by Monday, one final game will remain to be played in Matchday 26 of the 2019-20 Bundesliga season. All eyes will be on Bayer Leverkusen, who will resume their bid to qualify for the Champions League when they take on Werder Bremen at the Weser Stadium.

Werder Bremen have endured a season from hell so far, having collected a mere 18 points from their 24 games. Problems at both ends have paved the way for a struggle of a campaign, with the River Islanders scoring the joint-fewest goals while conceding the most strikes in the league till date.

Bayer Leverkusen, on the other hand, have been striving to reach the Champions League in back-to-back seasons, closely following Borussia Monchengladbach. Now, RB Leipzig’s slip-up against SC Freiburg on Saturday gives Die Werkself, who boast one of the meanest defensive units in the Bundesliga as well as a highly exciting attack, a chance to plug the gap to the top four further.

The reverse fixture, played in October last year at BayArena, ended in a 2-2 draw, as Lucas Alario scored a 58th minute strike to ensure a share of the spoils. Ahead of the latest meeting between the two sides, The Hard Tackle takes a closer look at the Bundesliga encounter.

Florian Kohfeldt is already under the pump due to his side’s lowly position. His job does not get any easier on Werder Bremen’s return to action, with a number of players on the sidelines. Against Bayer Leverkusen on Monday, the 37-year-old could be without as many as six first-team players.

Ludwig Augustinsson (muscular injury) and Claudio Pizzarro (thigh) are out with their respective injuries while Davy Klaasen misses his first game of the season due to suspension. Apart from the trio, the likes Niclas Fullkrug (knee), Omer Toprak (calf) and Kevin Mohwald (knee) are doubtful to feature, but are believed to be nearing their returns.

In case Toprak does not feature, Milos Veljkovic will feature in the back-three alongside Kevin Vogt and captain Niklas Moisander. The three-man unit will provide cover to goalkeeper Jiri Pavlenka, who ought to be a busy man between the sticks.

Kohfeldt is, meanwhile, expected to line his side up in a 3-4-3, which, in many ways will mirror the kind of formation Peter Bosz lines Bayer Leverkusen in. Up ahead in midfield, Klaasen’s absence means Nuri Sahin is likely to partner Maximilian Eggestein, with Theodor Gebre Selassie and Marco Friedl being the two wing-backs.

The key man in attack will be Milot Rashica, who could be playing his final few games for Werder Bremen, with RB Leipzig and Liverpool interested in signing him. Rashica will line up on the left side of the front three, with Leonardo Bittencourt starting on the opposite flank, while Davie Selke will lead the line for the hosts. 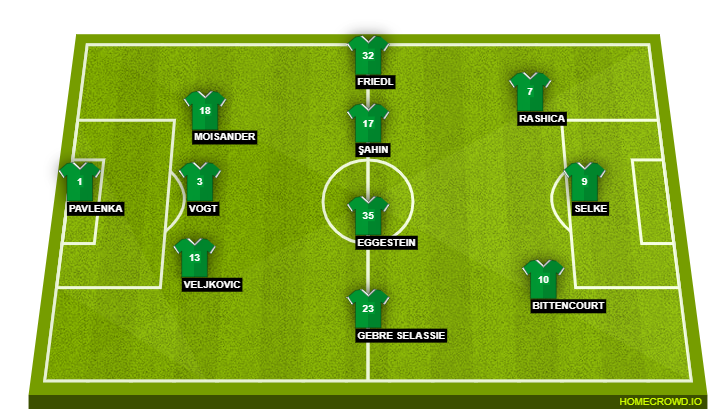 Unlike his counterpart in the Werder Bremen dugout, Peter Bosz barely has any major fitness troubles hampering his preparations ahead of his side’s return to action. However, the Bayer Leverkusen manager will be without star striker Kevin Volland, who is out with an ankle injury.

In Volland’s absence, Lucas Alario is expected to spearhead the Bayer Leverkusen attack, with Kai Havertz and Karim Bellarabi providing support to the 27-year-old striker. Bosz will also be able to call upon a number of other attackers from the bench, with the likes of Leon Bailey, Paulinho and Moussa Diaby providing handy options.

Apart from Havertz though, one player who will shoulder a lot of responsibility is Charles Aranguiz. The Chilean midfielder has been in great touch this season, with his exploits piquing the interest of several clubs. Aranguiz will be in-charge of transitioning from midfield to attack, with Julian Baumgartlinger providing cover to the defence.

Meanwhile, the width will primarily be provided by the wing-backs, with Lars Bender and Wendell expected to be the two wide men. At the back, Sven Bender, Jonathan Tah and Edmond Tapsoba will form the three-man defensive unit, with the brilliant Lukas Hradecky taking his place in goal. 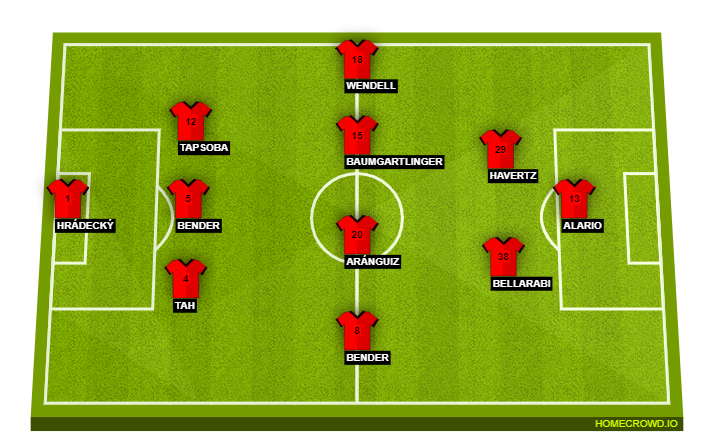 A player who has the world at his feet despite being all of 20, Havertz has quickly become a pivotal player for Bayer Leverkusen. Since the turn of the year, Die Werkself have been in inspired form as they chase a top four spot. And, it is no coincidence that this spell has coincided with Havertz’s best run of form this season.

In this period, Havertz has scored four goals and provided as many assists. Suffice to say, his contribution will go a long way in determining Bayer’s final league position by the end of the season. On Monday, Havertz will once again be the key man in attack, especially with star striker Kevin Volland unavailable due to injury.

This is one of the easier games to predict this weekend, despite the fact that a long time away from the game can lead to some shock results. RB Leipzig’s draw against SC Freiburg on Saturday is evidence enough of the same, but Bayer Leverkusen are likely to come back from Bremen unscathed.

With a plethora of attacking stars at his disposal, Peter Bosz should oversee a rather comfortable evening, with Werder Bremen’s attacking and defensive horrors likely to resurface. To that end, The Hard Tackle predicts a 3-0 win for Bayer Leverkusen, who will close the gap to top four to just one point.