Manchester City will be hoping to book their place in the FA Cup quarter-finals when they take on Sheffield Wednesday on Wednesday.

FA Cup action resumes on Wednesday, with three of the remaining four fifth round matches set to be played. Holders Manchester City will take the field on the day, aiming to seal safe passage to the quarter-finals when they lock horns with Sheffield Wednesday at Hillsborough on Wednesday night.

Sheffield Wednesday entered the FA Cup in the third round, where they beat Brighton & Hove Albion before getting the better of QPR in the fourth round. The Owls, though, have not been in the best of forms over the last month or so, winning just one of their last eight games in the second tier.

Manchester City, on the other hand, eased to the FA Cup fifth round on the back of two comfortable wins in the previous two stages, scoring four goals in each game. The Citizens have been on a solid run of form lately and come into this game on the back of winning the Carabao Cup for a third year running.

Manchester City ran out 2-1 winners the last time they clashed with Sheffield Wednesday, with James Milner scoring both the goals in the narrow FA Cup win. Ahead of the latest meeting between the two sides, The Hard Tackle takes a closer look at the encounter.

? GM: My priority and focus is purely on a big game against a big opponent tomorrow. All my energy is there at this moment #swfcLIVE pic.twitter.com/gNJpK1PjZj

Garry Monk does not have any fresh injury concerns to contend with ahead of the visit of Manchester City. On Wednesday, the Sheffield Wednesday boss will be without three first-team players due to fitness troubles, with Adam Reach, Massimo Luongo and Moses Odubajo missing out.

In addition, Connor Wickham and Josh Windass will be unavailable as they are cup-tied after already representing their parent clubs earlier in the competition. However, there is some good news, with Steven Fletcher coming through unscathed in his comeback game this past weekend.

Fletcher is, therefore, expected to lead the line for Sheffield Wednesday, who will line up in a 4-4-2 formation against Manchester City. However, with Wickham ineligible to feature, Sam Winnall is expected to be Fleticher’s strike partner.

Jacob Murphy and Kadeem Harris will provide the X-Factor in this Sheffield Wednesday, with the duo lining up out wide. Kieran Lee and Barry Bannan will sit in the middle of the park, looking to curb the flow of the Manchester City attack.

At the back, the onus will be to remain organised and disciplined in order to keep the Manchester City forwards at bay. Tom Lees and Dominic Iorfa will pair up at the heart of the Sheffield Wednesday defence, with Morgan Fox and Liam Palmer being the full-back pairing. Cameron Dawson will be stationed between the sticks for the hosts. 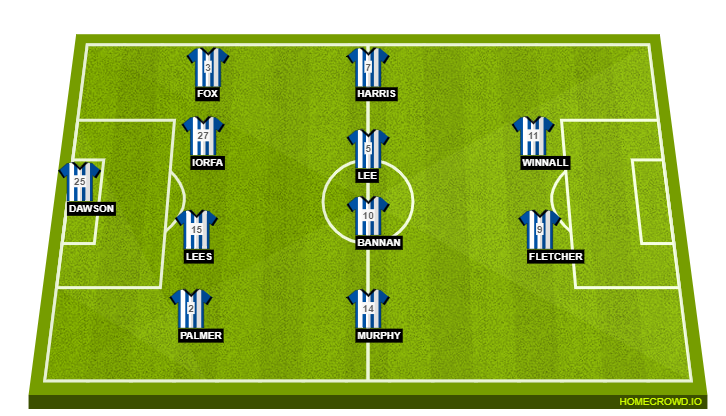 Pep Guardiola does not have any fresh fitness troubles hampering his preparations ahead of the trip to take on Sheffield Wednesday in the FA Cup fifth round. On Wednesday, the Manchester City manager will be without just one first-team player, with Aymeric Laporte still on the sidelines.

Leroy Sane recently returned to action in a Premier League 2 game and is still making progress on his fitness, meaning he will not feature against Sheffield Wednesday. Sergio Aguero, though, is fit and available after coming off with a knock in the Carabao Cup final this past weekend.

However, Aguero is unlikely to spearhead the Manchester City attack, with Gabriel Jesus expected to come in as the central striker. Guardiola should make a number of rotations, but Claudio Bravo and John Stones are likely to keep hold of their places on the opposite end.

Stones should have Eric Garcia as his partner at the heart of the Manchester City defence, with Joao Cancelo and Benjamin Mendy expected to come in as the two full-backs. Rodri is another player who is likely to start again, sitting at the base of the three-man midfield.

Kevin De Bruyne should return and provide the creative impetus in the middle of the park, while Phil Foden will be the third Manchester City midfielder, with the young Englishman taking up more advanced positions on the pitch. Riyad Mahrez and Bernardo Silva will complete the numbers in the final third, providing support to Jesus. 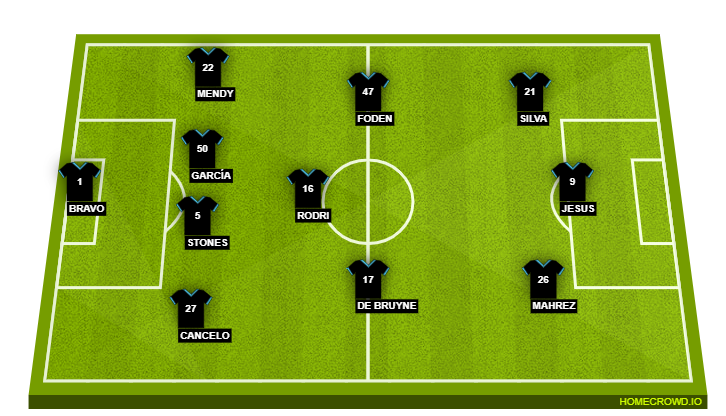 Brought in as a possible successor to Sergio Aguero, Gabriel Jesus has not quite managed to deliver the goods on a consistent basis in Manchester City colours. However, the FA Cup has been a happy hunting ground for the Brazilian, who has scored 7 goals and provided 4 assists in just 8 outings in the competition.

Set to be handed a start in place of Sergio Aguero, Jesus will have a chance to make an impression on Pep Guardiola, as he looks to play a prominent role for Manchester City for the remainder of the season. A big game for the Brazilian, who needs to continue playing consistently in order to have a bright future at the club.

The Premier League campaign might not have gone as per plan for Manchester City, but they continue to remain the single most dominant team in domestic cup competitions. Having already won the Carabao Cup this past weekend, the FA Cup holders will look to take a step closer to winning the competition for a second successive year.

Sheffield Wednesday are not at full strength and will unlikely pose a great deal of threat, with top scorer Steven Fletcher only just back from injury. With that in mind, The Hard Tackle predicts a straightforward evening for Pep Guardiola & co. who will beat Sheffield Wednesday 3-0 to reach the quarter-finals.