AC Milan will be looking to progress to the quarter-finals of the Coppa Italia when they welcome SPAL to San Siro on Wednesday.

The Round of 16 of the Coppa Italia is underway, with teams vying to seal their passage through to the Last 8 stage. AC Milan will be in action on Wednesday evening, when they will play hosts to SPAL, with both sides looking to book one of the eight spots in the next round.

AC Milan will be featuring in the Coppa Italia for the first time this season, with the Rossoneri being one of the eight highest-ranked teams who enter the competition in the Round of 16. Stefano Pioli & co. will enter this game high on confidence, after registering a first win in four games this past weekend.

SPAL, on the other hand, have been a part of this season’s Coppa Italia since the third round, where they beat Serie C outfit Feralpisalo 3-1. A 5-1 win over Lecce enabled them to make the Round of 16, but their results since that victory have been rather dismal, with Leonardo Semplici’s men managing just one win in their last five games.

AC Milan and SPAL have already locked horns once this season, back in November in Serie A, with Suso scoring the only goal in the game to hand a narrow win to the Rossoneri. Ahead of the latest meeting between the two sides, The Hard Tackle takes a closer look at the encounter.

Stefano Pioli has a few pressing injury concerns to deal with ahead of the visit of SPAL. On Wednesday, the AC Milan manager is set to be deprived of the services of six first-team players, with Gianluigi Donnarumma, Davide Calabria, Mateo Musacchio, Ricardo Rodriguez, Lucas Biglia and Hakan Calhanoglu missing out.

In Donnarumma’s absence, January signing Asmir Begovic, who joined on loan from Bournemouth this month, could be in line for his AC Milan debut. However, Antonio Donnarumma is likely to get the nod in goal for the hosts.

Musacchio’s injury-enforced absence also creates an opportunity for a debut. Simon Kjaer is set to feature for the first time for AC Milan, partnering captain Alessio Romagnoli at the heart of the defence. With Calabria and Rodriguez sidelined, Theo Hernandez and Andrea Conti will form the full-back pairing.

Pioli successfully experimented with a 4-4-2 formation last time out and the same system should be implemented against SPAL. Samu Castillejo, who will be the creative force for AC Milan, will start on the right flank, with Giacomo Bonaventura likely to get the nod on the left.

Ismael Bennacer and Franck Kessie will partner up in the central areas. Zlatan Ibrahimovic could be given a bit of a breather to begin with against SPAL, with Krzysztof Piatek likely to replace the Swede. Piatek should have Rafael Leao as his strike partner. 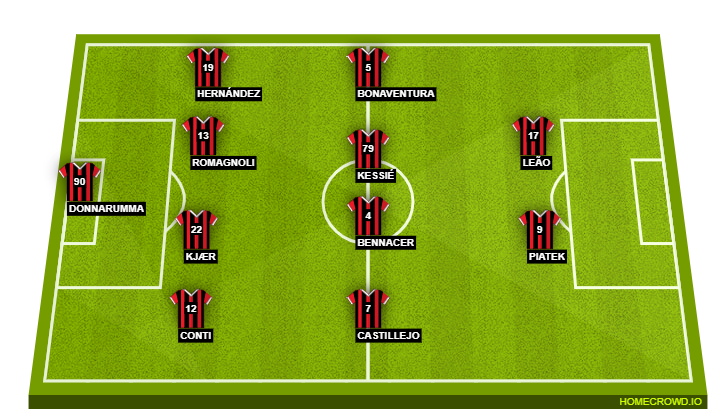 Much like his counterpart in the AC Milan dugout, Leonardo Semplici has a few major injury troubles hampering his preparations as well. On Wednesday, the SPAL manager will be without three first-team players, with Arkadiusz Reca, Marco d’Alessandro, and Mohamed Fares sidelined.

Semplici had rested some of his key players ahead of the Coppa Italia fixtures, meaning a few changes could be in the offing. However, there is no replacing Etrit Berisha in the SPAL goal. Nenad Tomovic served a one-match ban last time out and is likely to return to the back three, with Thiago Cionek and Felipe being his central defensive partners.

With Reca sidelined, Igor is likely to start as a makeshift left wing-back once again, with Gabriel Strefezza starting on the opposite flank. Simone Missirolli will hold the fort in the middle of the park, looking to provide cover to the backline. Missirolli will be supported by Alessandro Murgia and Mattia Valoti.

Upfront, Sergio Floccari and Andrea Petagna are expected to return to the starting lineup, with the duo forming the strike partnership for SPAL. 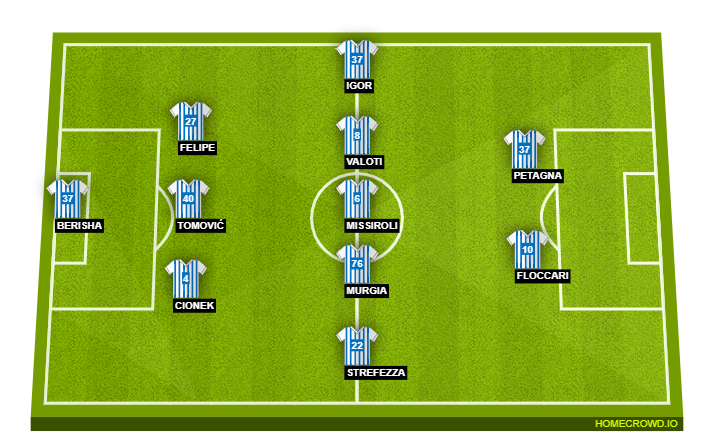 Having arrived at AC Milan with a lot of promise, Piatek’s spell at the club has been nothing short of a whimper. The Polish striker has just not managed to deliver the goods, with the current season being a dismal failure to say the least.

Zlatan Ibrahimovic’s signing has reduced his importance further and it has been reported that a move to the Premier League might just be on the horizon. Before then, though, Piatek has perhaps, his last chance to make an impression on Stefano Pioli. Can the Pole finally make an impression?

AC Milan showed some positive signs in their most recent fixtures, with a change in formation, coupled with the Zlatan Ibrahimovic factor, working in their favour. SPAL, on the other hand, are going through a terrible campaign, one which could end with relegation from Serie A.

The Biancazzurri, though, have impressed in the Coppa Italia, although the brakes could be slammed against AC Milan. With Krzysztof Piatek eager to impress and Zlatan Ibrahimovic on the bench as a backup option, the hosts seem to have enough firepower to win this contest. The Hard Tackle, therefore, predicts a 2-0 win for Stefano Pioli & co.