La Liga action resumes this weekend with Matchday 32 of the season. On Saturday, Barcelona will be aiming to quickly put the shock loss to AS Roma behind them and turn their attention back towards setting the unbeaten league record when they play hosts to Valencia at Camp Nou.

Barcelona suffered a shock defeat at the hands of AS Roma in the Champions League that dumped them out of the competition at the quarter-finals stage. In the league though, Ernesto Valverde’s men have largely been imperious and are on the cusp of breaking La Liga’s all-time unbeaten record.

Valencia, on the other hand, have put their mid-season slump in form behind them, winning eight of their last nine league games – the other being a draw – and have not lost a match in nearly two months. The positive run of results has seen them come back into contention for a second-placed finish, with Atletico Madrid just three points ahead.

The reverse fixture, played at the Mestalla in November, saw Barcelona come from behind to hold Valencia to a late 1-1 draw. Ahead of their latest meeting on Saturday, The Hard Tackle takes a closer look at the encounter.

Ernesto Valverde does not have many pressing injury concerns to deal with ahead of the visit of Valencia. On Saturday, the Barcelona boss will only be without two first-team players, but one of these absentees is a major cause for concern.

Ivan Rakitic is set to miss a couple of weeks of action after undergoing hand surgery following the Roma loss on Tuesday. The Croat is now battling to regain fitness in tome for the Copa del Rey final against Sevilla later this month.

Meanwhile, Lucas Digne has returned to training after recovering from a hamstring injury, but the game may have come too soon for him. With the Frenchman still on the sidelines, Jordi Alba is unlikely to get any rest, and will continue on the left side of the Barcelona defence.

Alongside him at the back, should be Gerard Pique, Samuel Umtiti and Sergi Roberto. In midfield, Rakitic’s void should be filled by Paulinho, while Ousmane Dembele and Philippe Coutinho are likely to assume the wide midfield roles.

Sergio Busquets, though, might be rested as he continues regaining fitness from a toe injury. Upfront, the strike partnership of Lionel Messi and Luis Suarez will make amends to their poor showings in the midweek loss in Europe, and will be aiming to get back to goalscoring ways against Los Che. Marcelino, like Valverde, has very few roster issues hampering his preparations for the weekend as Valencia prepare to visit Camp Nou. On Saturday, the manager could be without as many as three first-team players, although none of them is particularly posing a major concern.

The certain absentee is Francis Coquelin, whose season has come to a premature end due to an Achilles tendon injury. Javier Jimenez (ACL) and Antonio Latorre (groin) are also sidelines, although the duo have returned to training and should soon be in contention.

The absentees aren’t exactly first-choice options, meaning a largely full-strength starting lineup is expected to be named by Marcelino. At the heart of the Valencia defence, Ezequiel Garay and Gabriel should be the preferred partnership, while Martin Montoya and Jose Gaya are likely to be the full-backs, who will be key with their marauding runs down the flanks.

Dani Parejo and Geoffrey Kondogbia will line up alongside each other in midfield, looking to stifle the Barcelona attacks down the middle. The former, meanwhile, will also be a key man initiating attacks, linking up with Carlos Soler and Goncalo Guedes on the flanks.

Upfront, in-form Spain striker Rodrigo will be provide support to Simone Zaza, creating space with his movement to pull the Barcelona defenders out of position, which the latter should exploit with his runs into the box. 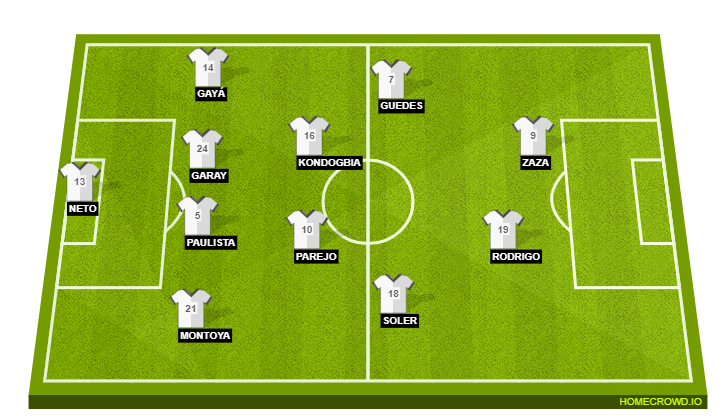 One of the revelations in the super successful Valencia side under Marcelino, Guedes has put his PSG struggles behind him quite well. A key figure in attack for Los Che, the player has used his pacy outlet to good effect in the wide areas, contributing to some crucial goals over the course of the campaign.

The goals though, have dried up slightly in recent months, with only two assists in last three months of club football. Irrespective of his direct contribution to a goal, Guedes will undoubtedly be vital in testing a Barcelona defence that has proven to be vulnerable of late.

Saturday’s tie features two sides who are on the best domestic runs in Spain, and both clubs are looking to make a point on the night. While Barcelona will be smarting from their loss to AS Roma, and will be aiming to set the record straight, Valencia will look to continue their fine unbeaten run to keep firm their grip on third place.

Meanwhile, Marcelino will be aiming to record his first ever win over Barcelona as a manager, although there should be very little separating two strong sides on Saturday. The Hard Tackle predicts an evenly contested affair that should result in a 1-1 draw.