Liverpool and Everton meet for the third and final time this season when the Toffees host their neighbours at Goodison Park on Saturday.

Premier League football continues this weekend with Gameweek 32, with two massive derbies scheduled in the latest round of matches. The lunchtime kick-off on Saturday sees Everton and Liverpool face off in the 231st Merseyside Derby at Goodison Park, the third time the two sides will be meeting this season.

Everton come into the match with a lot of mixed emotions. While Sam Allardyce has stabilised a rocking ship, fans have been unhappy about the quality of football on display from his side. The Toffees’ home form though, is quite strong, with the 3-1 loss to Manchester City last weekend only their second in the last 12 games at Goodison Park.

Liverpool, on the other hand, are riding high on confidence, having lost just one game in all competitions in the last two months. The Reds will further be buoyed heading into the derby following their emphatic 3-0 win over Manchester City in the UEFA Champions League quarter-finals first leg.

The last meeting between these two sides saw Liverpool edge Everton in a narrow 2-1 win, with Virgil van Dijk scoring the winner on his Reds debut. Ahead of their latest meeting on Saturday, The Hard Tackle takes a closer look at the encounter.

Sam Allardyce has a number of pressing injury concerns to deal with ahead of the visit of Liverpool. On Saturday, the Everton boss could be without as many as six first-team players due to various fitness problems.

The major absentee for the Toffees is Gylfi Sigurdsson, who is recovering from a knee injury. Idrissa Gueye is another big name player on the treatment table, with the Senegalese international doubtful due to a hamstring problem. Mason Holgate (ankle), Eliaquim Mangala (knee), James McCarthy (leg) and Maarten Stekelenburg (groin) are the other absentee.

There is some reprieve for Allardyce though, with Ashley Williams available once again after serving a three-match ban. The Welshman should shore up the backline, with Michael Keane as his partner at the heart of the Everton defence. The full-backs, Seamus Coleman and Leighton Baines will be key on both ends of the pitch.

Up ahead in midfield, the tireless Tom Davies should line up alongside Morgan Schneiderlin to release Wayne Rooney into more advanced positions. Theo Walcott and Yannick Bolasie will be the wide men providing a pacy outlet on the flanks, with Cenk Tosun leading the line for the hosts.

The Turkish striker has been a fine addition for Everton, and has four goals in his last four games. His presence inside the box has often been crucial, complementing the creative abilities of Rooney to find himself in pockets of spaces unmarked, and he will again be key against Liverpool. 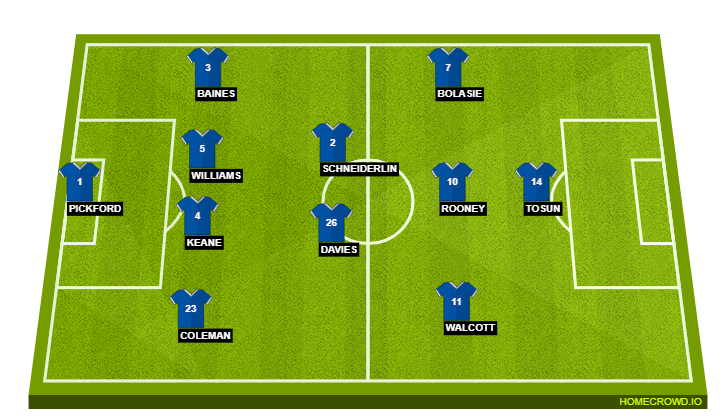 Jurgen Klopp, like Allardyce, has a number of issues plaguing his squad ahead of the trip to Goodison Park. Mohamed Salah, in particular, is a major scare for the Liverpool boss, who is sweating over the fitness of his star man after he pulled up with a groin injury in the midweek win over Manchester City.

Even if declared fit, the Egyptian is only likely to start on the bench with one eye on the return leg against City on Tuesday. Other than Salah, there are five other players on the treatment table, with Emre Can (back), Adam Lallana (hamstring), Joel Matip (thigh), Ragnar Klavan (match fitness) and Joe Gomez (ankle) all set to miss out.

The injuries to so many players has Klopp down to his bare bones as far as team selection is concerned. The starting lineup is, therefore, more or less an automatic selection. The back-four should be the same as Wednesday, with Loris Karius continuing between the sticks.

In midfield, Georginio Wijnaldum should return to the lineup, partnering Jordan Henderson and James Milner. Alex Oxlade-Chamberlain is likely to be deployed in attack in the absence of Salah, with Sadio Mane and Roberto Firmino making up the numbers upfront.

Oxlade-Chamberlain, in particular, will look to drift inwards into spaces created by Firmino whenever the Brazilian drops deep. Henderson, on the other hand, will be key in stifling the Everton attack, while also distributing the ball quickly through Wijnaldum and Milner, who will be the workhorses of the side. Walcott had seemed to be an inspired addition at Everton in January, with the former Arsenal man hitting a brace in only his second game for the Merseyside Blues. The honeymoon period has, since, ended and the Englishman has struggled to create much of an impact from the right flank.

An inspired showing would help the Toffees pile the pressure on the wide areas, with Yannick Bolasie looking in good touch on the opposite flank. Who knows, if Walcott does turn up against Andrew Robertson, Everton might be on their way to clinch a popular win over their local rivals.

Merseyside derbies often turn out to be a fiery affair and this shouldn’t be any different, thereby ensuring another close contest between Everton and Liverpool. Jurgen Klopp should be inclined to rest a few players, but injuries will force him to field a largely first-choice side, which might work in his favour.

Everton do not have any lofty ambitions left from their campaign, and should play without pressure. But, the form of Wayne Rooney and Theo Walcott is a major concern, and Liverpool should have enough firepower to edge their rivals on Saturday. The Hard Tackle predicts a 2-1 win for Klopp & co.