The fixtures in La Liga continue to come in thick and fast ahead of the international break. On Thursday, Barcelona will be aiming to stretch their record unbeaten run when relegation threatened Las Palmas welcome them to Estadio Gran Canaria, with major implications on both ends of the pitch.

The hosts haven’t had much joy in La Liga this season, having struggled to get out of the relegation zone for much of the campaign. Since the turn of the year, Paco Jemez’s men have won just two of their ten games in all competitions, and are down in 18th on the table, a point behind 17th-placed Levante.

Barcelona, on the other hand, have barely put a foot wrong this season, having gone 32 games without a loss, going back to last season – a club record. In the current campaign, Ernesto Valverde’s men have only dropped points five times, and are seven points clear on top of the La Liga table.

The reverse fixture, played back in October at Camp Nou, saw Barcelona cruise to a 3-0 win, with Lionel Messi scoring a brace to lead his side over the line. Ahead of their latest meeting, The Hard Tackle takes a closer look at the encounter.

Paco Jemez has a few pressing injury concerns to deal with ahead of the visit of Barcelona. On Thursday, the Las Palmas boss will be without at least three key first-team players, with winger Momo a major doubt, even though he has recovered from a calf injury.

The players who will definitely miss the game though, are Pedro Bigas, Gabriel Penalba and Emmanuel Emenike, with all three recovering from their respective knee injuries. In the latter’s absence, Jonathan Calleri should start upfront again, with the Argentine looking to add to his nine goals this season.

At the back, the key men will be Alex Galvez and Ximo Navarro, who are likely to line up at the heart of the Las Palmas defence, with Michel Macedo and Daniel Castellano flanking them on either side. The full-backs typically overlap in the final third to stretch the opposition defence, and will look to do the same against Barcelona.

Oghenekaro Etebo and Vicente Gomez will provide the steel in midfield, aiming to absorb the pressure created by the Barcelona attack before relaying the ball out front, where Jonathan Viera will be the creative force for the hosts.

Upfront, Viera will team up with Jonathan Calleri, and the duo will also form the first line of defence for Las Palmas, pressing aggressively to work the ball off the Barcelona defenders, with the wingers doing the same on the flanks. 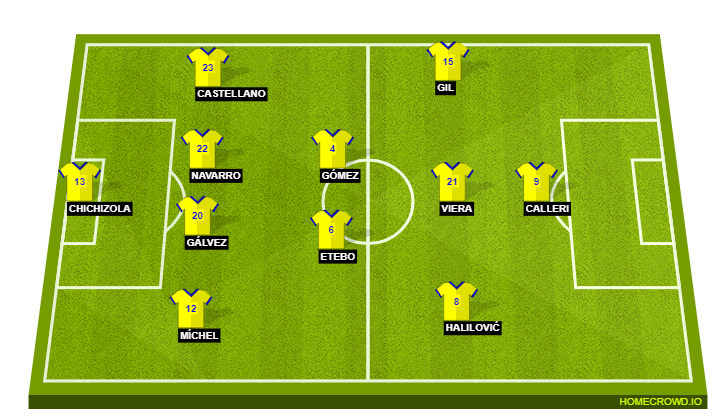 Like Jemez, Ernesto Valverde has a few roster issues on his hands ahead of the trip to Estadio Gran Canaria. The Barcelona boss is set to be without two first-team players due to injury and suspension, with another a major doubt for the game.

Nelson Semedo is out with a hamstring injury sustained during the win over Girona over the weekend, and he will be missing for up to six weeks. Jordi Alba will miss the game through suspension after picking up his fifth booking of the season, and will be replaced Lucas Digne on the left side of defence.

Meanwhile, Gerard Pique is doubtful for the game as he continues to struggle with a knee injury. Valverde might just choose to hand a rest to the veteran defender, with one eye on the Atletico Madrid game on the weekend, which could see Thomas Vermaelen lining up alongside Samuel Umtiti at the heart of the Barcelona defence.

Up ahead in midfield, Paulinho is likely to return to the side, with Ivan Rakitic likely to be rested. Ousmane Dembele should get another game to continue building on the strong outing against Girona. The final midfield spot is a throw up between Andres Iniesta and Philippe Coutinho, but the latter might get the nod to preserve the Barcelona captain.

Upfront, Ernesto Valverde is likely to prefer resting Luis Suarez as he is just one booking away from a suspension. But, Paco Alcacer is doubtful for the game as he is recovering from gastroenteritis, throwing a spanner in the works, meaning Suarez might just start. Things didn’t quite work out to plan for the young Croat at Barcelona, and his supposed resurgence at Hamburg petered out just as quickly. At Las Palmas, there was a feeling that Halilovic might finally come good, but he has continued blowing hot and cold, with his first goal of the season only coming recently.

Against his former side though, the player should be fired up, especially after affirming that there are big things to come from him in the future. With a point to prove, we might just see Halilovic turn up a notch in order to lead his side to shock win.

This is a game that pits the best attacking unit in La Liga with its worst defence. So, on paper, there is only one way the tie should be headed. And while games aren’t just won on paper, Paco Jemez’s men haven’t shown the kind of form in recent weeks to provide much confidence heading into the game.

Barcelona, on the other hand, are starting to look imperious once again, with Philippe Coutinho and Ousmane Dembele finding their feet at Camp Nou. With the duo likely to start once again, we could see another goal glut by Ernesto Valverde & co. We predict a comfortable 3-0 win for the visitors.