The curtains will fall on Gameweek 26 of the Premier League with a Monday night London derby. A Watford side gasping for wins plays hosts to Chelsea, who themselves are looking to return to winning ways at Vicarage Road, in what promises to be a keenly contested affair.

The Hornets have massively petered off from their early season form, and a solitary win in their last 12 games have seen them fall down to 11th, just three points clear of the relegation zone. The poor run of results also cost Marco Silva his job, and new boss Javi Gracia is still looking for his worst league win as the Watford manager.

Chelsea’s recent fortunes haven’t been much better either, with just two wins inside ninety minutes in their nine games following the turn of the year. The poor run of results have meant that the Blues have fallen down to 4th on the table, and are perilously looking over their shoulders.

The reverse fixture, played back in October at Stamford Bridge, saw Michy Batshuayi come off the bench and inspire a come-from-behind 4-2 win for Chelsea. Ahead of their latest meeting on Monday, The Hard Tackle takes a closer look at the encounter.

Javi Gracia has a fully blown out injury crisis on his hands ahead of the visit of Chelsea. On Monday, the Watford boss could be without as many as eight first-team players due to various short-to-long-term fitness problems.

The likes of Thomas Hoban (ACL), Miguel Britos (foot), Nathaniel Chalobah (knee), Kiko Femenia, Will Hughes and Molla Wague (all hamstring) will definitely miss the game due to their injuries. In addition to them, Younes Kaboul (foot) and Craig Cathcart (knee) are doubtful for the game, making defence a major problem area.

The absence of several central defenders means that Sebastian Prodl and Christian Kabasele are automatic picks at the heart of the Watford defence. Adrian Mariappa and Jose Holebas should be the full-backs, although the key men reside in midfield.

Tom Cleverley and Abdoulaye Doucoure will be the players providing cover to the defensive unit that will be tasked to stay narrow. Etienne Capoue will also add to the numbers defensively while also making himself available around the Chelsea box.

Providing the width for the Hornets should be January signing Gerard Deulofeu and Richarlison, who is in some serious need of inspiration to rediscover his early season form. The choice of the front man is between Andre Gray and Troy Deeney, although neither inspires much confidence. 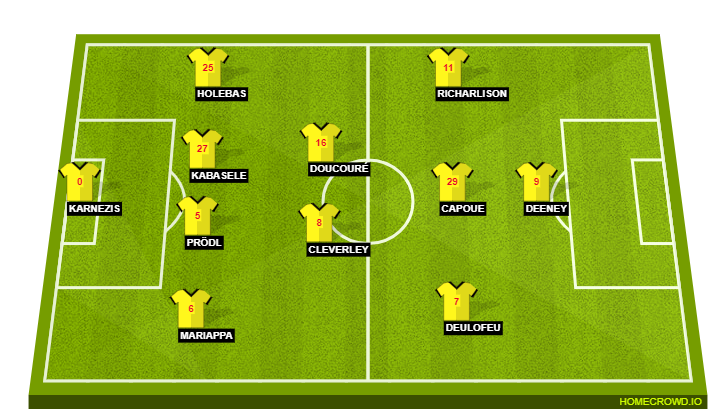 Antonio Conte does not really have a major injury crisis as such hampering his preparations for the trip to Vicarage Road, unlike Gracia. But, the Chelsea boss could be without as many as five first-team players for Monday’s London derby.

The players who are certain to miss the match are Andreas Christensen (hamstring), Alvaro Morata (back) and Ross Barkley (hamstring), with the latter sustaining his injury during training this week. David Luiz (match fitness) and Willian (hamstring) are doubtful, giving Conte some headaches all across the park.

The major problems lie in attack due to the possible absence of Willian, considering Morata is already unavailable. Should the Brazilian be unable to regain fitness, Olivier Giroud, who is in contention for his Chelsea debut anyway, could start as the focal point of attack, with Eden Hazard and Pedro in the wide areas.

Barkley’s absence, coupled with Cesc Fabregas’ recent return to fitness means that the midfield pivot is likely to comprise Tiemoue Bakayoko and N’Golo Kante. Victor Moses and Marcos Alonso are expected to keep Davide Zappacosta and Emerson out as the wing-backs, and the duo will look to provide the dangerous cross for Giroud to score from.

At the back, Cesar Azpilicueta, Gary Cahill and Antonio Rudiger are automatic selections, due to Conte practically having no other options at his disposal. The trio will look to add steel in the back-three in order to shrug off their recent struggles against pacy attackers. The Barcelona return didn’t quite turn out to be as dream-like as he would have hoped, meaning Gerard Deulofeu is back in the Premier League for the third time. This time around, it’s a loan spell at Watford, one that he will like to do exceedingly well in, if he still hopes to have a future at Camp Nou.

The Spaniard did look quite dangerous in his debut a few days ago, and with the Hornets struggling to create chances consistently, they would hope that it’s not just the player who benefits from the loan spell but the team as well.

Chelsea’s struggles in front of goal of late is well documented, with players beyond Eden Hazard and Alvaro Morata, who are themselves failing to find the back of the net consistently, not managing to step up to the plate.

Enter Olivier Giroud – a deadline day signing for the Blues whose scoring record in the Premier League is not matched by many. The Frenchman will look to add another dimension to Chelsea’s style of play, and his hold-up play, in addition to his aerial abilities certainly bode well for Chelsea.

The turn of the year has hardly been ideal for Chelsea, who are going through a major slump in form. Out of the Carabao Cup and struggling to keep up in the race to finish second, Antonio Conte & co. need to pull their socks up and quickly. With that in mind, the Watford game perhaps comes at the most opportune time.

The Hornets are the most out-of-form side in the Premier League, with goals coming at a premium. The problems at the other end are worse still, and Chelsea will certainly hope to produce a response to the 3-0 humiliation suffered at the hands of Bournemouth. The Hard Tackle predicts a 3-1 win for the Blues.