Spain will look to inch a step closer to securing a place in next summer’s World Cup when they face Liechtenstein on Tuesday.

The latest round of World Cup qualifiers in Europe come to an end on Tuesday, and we are starting to get a clearer picture of the teams that remain in contention for a spot in Russia 2018. In Group G, Spain can move closer to securing a place for themselves when they travel to Rheinpark to face Liechtenstein on Tuesday.

Rene Pauritsch’s men are rock bottom in Group G, winless and without a single point to show for their efforts thus far. Suffice to say, the hosts come into this match on the back of another qualifying loss, with Albania running out 2-0 winners against them on Saturday.

Spain, on the other hand, are at the opposite end of the spectrum, unbeaten in the 2018 FIFA World Cup qualifying campaign and at the top of Group G. Julen Lopetegui’s men approach this match with a lot of momentum, having dispatched Italy with ease in a 3-0 win on Saturday.

The reverse fixture, almost a year ago, ended in an emphatic 8-0 win for Spain as David Silva, Diego Costa and Alvaro Morata grabbed a brace each. Ahead of their latest meeting on Tuesday, The Hard Tackle takes a closer look at the encounter.

Liechtenstein are pretty much making up the numbers in Group G, having been the whipping boys for every other outfit thus far. In fact, their current qualifying campaign has been a considerable step backwards for the minnows, who had 5 points in their bid to secure a place in Euro 2016.

Rene Pauritsch has had to deal with issues at both ends of the pitch, with his side only managing to score a solitary goal against Israel while conceding a mammoth 26 times, paving the way for seven toothless performances so far.

If they are to spring an unlikely surprise on Tuesday, in a similar fashion to Luxembourg against France on Sunday, veteran goalkeeper Peter Jehle will need to produce a performance of a lifetime. On the other end of the pitch, teenage striker, Yanik Frick, will look to make an impression at this early juncture of his career, if picked. 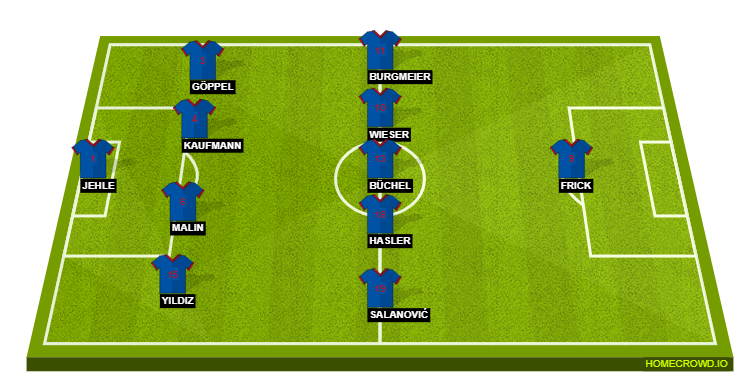 It has been an easy ride for La Roja under Julen Lopetegui over the last twelve months or so. Yet to taste defeat under the new Spain boss, the side are well on their way to completely rediscovering their domineering touch.

Up front, Lopetegui’s men have been clinical and ruthless, while at the back solidity has been the norm, backed by the effortless goalkeeping of David De Gea. And while the Spain manager has been clear on his best eleven thus far, he is likely to hand starts to several fringe players on Tuesday against the lowly hosts.

However, he will be without David Villa, a player who was expected to start the match, after the comeback man sustained a thigh strain in training. The likes of Saul Niguez, Cesar Azpilicueta and Nacho Monreal, though, could start the match.

Up front, Alvaro Morata is likely to slot back into the starting eleven after his impressive cameo against Italy on Tuesday. Isco and Pedro could be the players to line up either side of the Chelsea striker. But, in what might largely be a second string side, Lopetegui seems to still has a lot of firepower at his disposal to dispatch the hosts with ease. 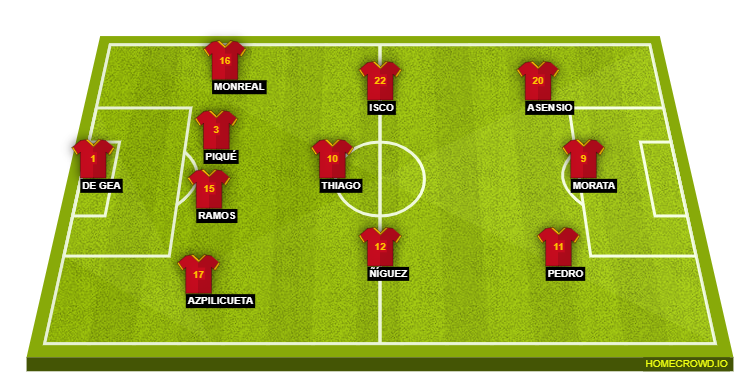 The latest developments at Chelsea have handed Alvaro Morata a golden opportunity at both the club and international level. With Diego Costa exiled from the Blues’ squad, the 24-year-old has taken no time to establish himself as Antonio Conte’s first-choice striker.

For his national side though, things are slightly more complicated. Against Italy, Julen Lopetegui chose to start Isco in a ‘False Nine’ role while keeping Morata on the bench. However, as he has shown time and again recently, the Chelsea striker proved to be Mr. Reliable with another clinical performance.

On Tuesday, he could have a chance to make an impact from the beginning, giving Morata the chance to impress his manager with another impressive performance. Should he enjoy another solid outing against the minnows, the player could go a long way in becoming the firm first-choice striker for Spain as well.

Tuesday’s match is another instance when a battle of the opposites will ensue as the hapless Liechtenstein host high flying Spain. Given the recent forms of the two sides and the huge gulf in quality, there can only be one result on paper – a comfortable win for Spain.

While one can also argue that games are not won on paper, Liechtenstein have shown nothing to suggest that they can take anything out of this game, having only managed to find the back of the net once in seven attempts.

With the likes of Morata, Isco and Marco Asensio being in formidable form currently, it should be an easy outing for the visitors. The Hard Tackle, thus, predicts a comfortable 4-0 win for Julen Lopetegui’s men.