We’re right at the midway point of the season, and it’ll be curtains to the first half of the campaign as Arsenal host Crystal Palace at the Emirates Stadium.

Arsenal got back to winning ways against West Bromwich Albion on Boxing Day after two consecutive defeats away to Everton and Manchester City saw them lose ground in the title race. Olivier Giroud, making his first start of the season headed in the only goal late into the match to earn the Gunners a hard fought 1-0 win.

The visitors Crystal Palace, on the other hand, will be happy to see 2016 end in what was a turbulent year for them. The Eagles won a paltry 0.73 points per game – the lowest tally in the Top 4 tiers of English football – and as a result, saw Alan Pardew being sacked from his job as the manager of the side.

In Pardew’s stead, Sam Allardyce was the man to be appointed at the helm at Selhurst Park, as Crystal Palace lay just a point from the relegation zone. He went off to a stable start in charge of the side as Palace drew 1-1 against Watford at Vicarage Road on Boxing Day to get a further point away from the drop zone.

The Hard Tackle takes a closer look at the fixture as we end Gameweek 19 at the Emirates Stadium.

The biggest news coming Arsene Wenger’s way is that centre-back Shkodran Mustafi has been declared fit and available for the London Derby against Palace, after recovering from the hamstring injury he suffered against Stoke City earlier this month.

The Germany international could slot right back into the starting lineup alongside Laurent Koscielny, a move that will certainly be a boost for Arsenal’s defence.

Meanwhile, striker Danny Welbeck is making positive progress from a knee injury he suffered earlier in the year and has returned to full training. The game against Crystal Palace, however, comes too soon for the England international as he is still some way off regaining match fitness.

Wenger though, has a few injury concerns to deal with as well, with Theo Walcott the biggest miss with a calf strain. Alex Oxlade-Chamberlain (hamstring) and Kieran Gibbs (knee) are also unavailable with their respective injuries, while Per Mertesacker (knee) and Santi Cazorla (achilles) are long-term absentees.

In the absence of Walcott and Oxlade-Chamberlain, Olivier Giroud should continue to be a part of the starting lineup, with Alexis Sanchez occupying the right wing slot. 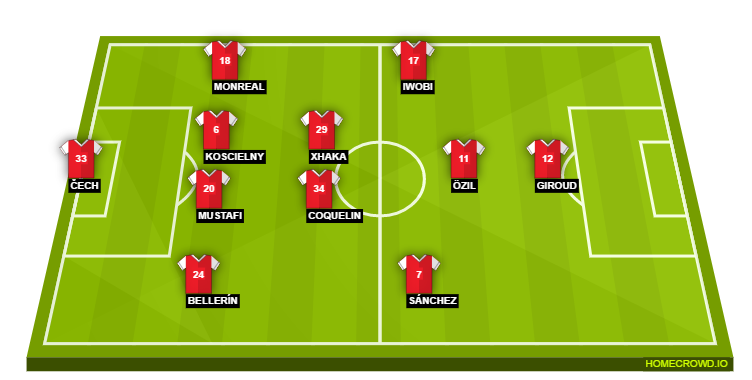 Sam Allardyce has Damien Delaney out with suspension for the difficult trip to the Emirates Stadium on Sunday, after the centre-back picked up his fifth yellow card in the match against Watford. However, James Tomkins has recovered from a thigh injury and could return to the starting lineup on Sunday.

Meanwhile, midfielders Joe Ledley and James McArthur (both knocks) are back in contention to start against Arsenal. But, Bakary Sako (muscle injury), Loic Remy (calf), Steve Mandanda (knee), Pape Souare (broken leg) and Connor Wickham (ACL) all remain out with their respective injuries.

The likes of Wilfried Zaha and Andros Townsend will be charged with putting the opposition fullbacks under pressure on quick counter attacks, as well as be the supply line to Christian Benteke, with Yohan Cabaye and Jason Puncheon providing attacking impetus from the midfield. 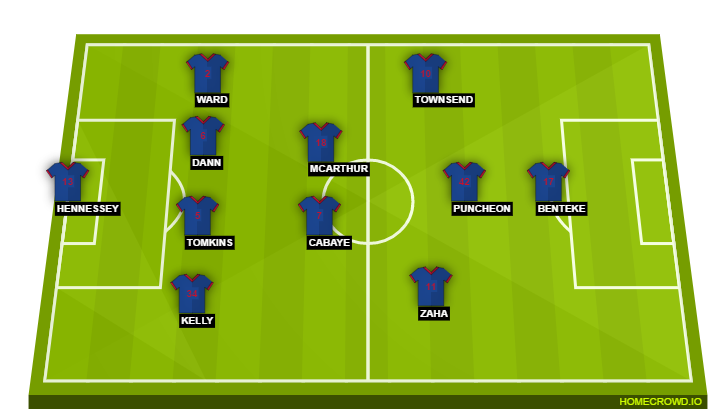 Player To Watch Out For

It has been a tough season for Olivier Giroud thus far. Having joined the first team squad a week late after representing France in the European Championships, he lost his place in the starting lineup to Alexis Sanchez.

With Sanchez proving to be successful in a new role as the furthest forward player, Giroud managed to make just two starts in the 14 games he was available for.

The match against Boxing Day was his third start of the season, and the first in Premier League, and he was the difference maker for Arsenal, as he headed in the only goal of the match with just four minutes left in regulation time to get his side a hard earned win over West Brom.

As Walcott and Oxlade-Chamberlain continue to remain out for Arsene Wenger’s side, Giroud has a chance to make an impression on his manager and possibly nail down a starting spot for himself for future weeks.

Crystal Palace had a nightmarish 2016 that ended with the sacking of their former hero Alan Pardew. The start to 2017 and the start to Sam Allardyce’s stint as the Eagles boss doesn’t get any easier with an incredibly daunting visit to the Emirates Stadium up next.

Arsenal have had a tricky last couple of weeks with two consecutive losses to Everton and City being followed by a struggling win over West Brom. However, the porous Palace defence offers them a chance to rediscover their scoring touch, and that’s why we predict a 2-0 win for Wenger’s men on Sunday.