An in-form Liverpool side travel to face Crystal Palace as Christian Benteke goes head-to-head against his former club.

Crystal Palace had a great start to the season with 10 points in their first six Premier League games. The Eagles, though, have since seen their run arrested with Alan Pardew’s side managing just a single point from a possible 9. After 10 goals in the first 6 games, Palace have managed just 2 in the previous three and a result against Liverpool could reinstate their morale.

Liverpool, on the other hand, are flying high at the moment. Their only poor result in recent times has been a 0-0 draw at home to Manchester United, a result which could be credited more to the resilient Red Devils than the inability of the Reds. A hard fought win over West Bromwich Albion was followed by another equally hard-earned win over Tottenham by a similar scoreline in mid-week and Klopp would look to keep this run going for as long as possible with Liverpool emerging as a legitimate title contender.

Alan Pardew would be happy to have captain Scott Dann back in contention for a place in the starting eleven as the Englishman looks to have recovered from a hamstring injury. Jason Puncheon, though, who received a calf injury that ruled him out of the tie against Leicester, remains a doubt for the Liverpool match.

Papa Souare and Loic Remy are still a long way away from being back to fitness while Christian Benteke’s brother Jonathan Benteke is also sidelined for a substantial amount of time.

Alan Pardew would hope Christian Benteke, who could be looking for a point to prove to Klopp and Liverpool after a failed spell at Anfield, is fired up enough for the match and can produce glimpses of his menacing self from his time at Aston Villa as the Eagles look to bounce back after three poor results.

Elsehwere, Martin Kelly is also in line to feature against his old side and would be eager to show how much he has developed since leaving Anfield.

Liverpool’s defence has been susceptible to attacks and Pardew could set up his team to soak and counter the Liverpool side, a tactic which was brilliantly displayed by Jose Mourinho’s Manchester United. 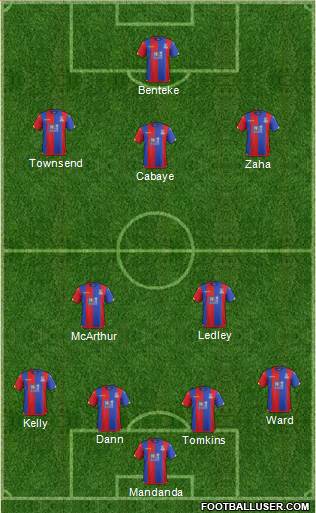 Jurgen Klopp rested the attacking trio of Coutinho, Firmino and Mane during the mid-week EFL Cup tie against Tottenham and the trio are set to be recalled by the German on Saturday.

Jordan Henderson has been a real presence in the midfield for Liverpool and the current captain is back in contention for a place in the starting eleven after serving a ban against Spurs during the mid-week.

James Milner is a doubt with illness and if the English veteran is unable to make it into the eleven, Klopp is likely to turn to Alberto Moreno, who has had a very topsy-turvy season till date.

Elsewhere, Sheyi Ojo is still on the sidelines along with promising defender Joe Gomez while Belgian forward Divock Origi is also a doubt for the trip to face Crystal Palace.

Liverpool’s attack has been praised to the hilts by the Kop and the pundits alike, and the former Borussia Dortmund manager would be hoping his players keep the run going as Klopp aims to reinstate Liverpool among the European Elites. 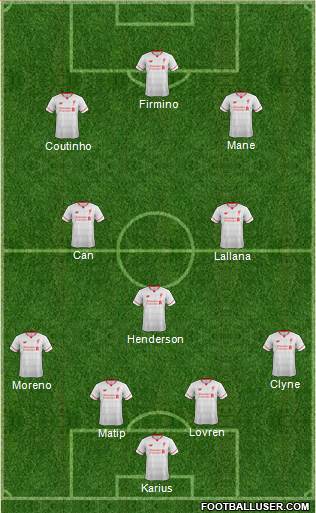 1. 9 – Crystal Palace have scored in each of their previous nine meetings against Liverpool.

2. Bogey team – Crystal Palace have lost just 1 match against Liverpool in their previous 5 Premier League meetings, winning 3 of them.

3. 14 – Crystal Palace have failed to keep the opposition at bay for 14 Premier League games now. Their last clean sheet came way back in April in a 0-0 draw with Everton.

4. 4 – Christian Benteke has scored four goals in his last five appearances against Liverpool.

5. 3 – Sadio Mane has managed to score in 3 of his previous four appearances against Crystal Palace.

Christian Benteke and Wilfred Zaha could team up for destruction against Liverpool with the Reds’ having a tendency to slack off a bit against the comparitively weaker opponents. But given the Reds’ recent form, it is hard to see a Palace win on Saturday.

The Eagles, though, have it in them to give Liverpool a tough time and seem capable of snatching a draw on home turf. Cabaye would be the driving force for Crystal Palace with Henderson performing similar duties, albeit in a more defensive role for the Reds.