Manchester City hope to make it three out of three wins as West Ham prepare to hand Pep Guardiola his first defeat in the Premier League.

Manchester City seems to have quickly turned themselves into a Pep Guardiola side. After some struggles in their opening game, the Citizens have since romped home with three thumping victories including the 4-1 win at Stoke.

West Ham, on the other hand, have been at the opposite end. The Hammers faced a narrow defeat to Chelsea in their opening match of the season while also failing to make the Group stages of the Europa League, losing to Astra. Bilic would be hoping his squad is able to bounce back and take the game to Guardiola’s men.

Kelechi Iheanacho has been cleared fit to play after being carried off against Steaua and could be in line for game time again as Pep Guardiola seems impressed with the player’s willingness to work for the team. New signing Claudio Bravo would not feature for City in the starting lineup, at least for this gameweek, and the Citizens are likely to wait before watching the Barcelona shot-stopper in action at Etihad.

Elsewhere, Vincent Kompany has not yet fully recovered from his thigh injury. This could mean another start for Otamendi over Kolarov alongside John Stones, after the defender impressed in their last outing against Stoke.

Leroy Sane and Ilkay Gundogan are likely to not be fully fit to feature at the Etihad against West Ham. But Guardiola would not be too concerned with his current starters in such blistering form.

Manchester City seemed to have slipped well into Guardiola’s system with the movement and passing looking more fluid compared to the season opener against Sunderland. It has only been two Premier League games into the Pep era at Etihad but the Citizens have already seen some amazing displays of what the future holds under the former Barcelona manager.

Pep Guardiola might consider a slightly normal or deep back-line because of the pace of Enner Valencia and Gokhan Tore up front for West Ham. Fernandinho seems to have been given the most important role, with the player being the link from the defence to the creative outlet of Silva and De Bruyne while providing some steel to the midfield. 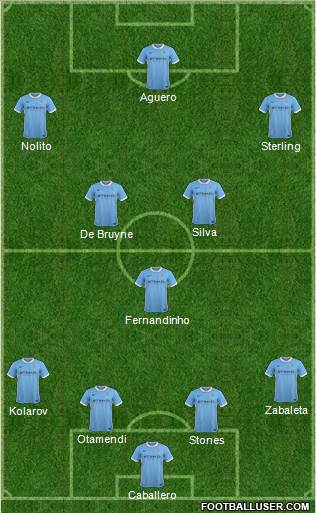 West Ham have quite a few players out with injury, which has seemed to take a toll on their performances in the beginning of the season. Andy Carroll, Sakho, Feghouli and Andre Ayew are all likely to be out for a long period of time.

Mark Noble is likely to be available for selection but fellow midfielder Harvard Nordtveit is set to miss out. The major blow to the Hammers is the unavailability of star creative threats Dmitri Payet and Manuel Lanzini, but the boss is hopeful of at least one of them returning before the match against Manchester City.

West Ham have shown their prowess on the counter while also posing a potent threat from set-pieces. But their game-play depends more on individual pieces of brilliance more often than not.

Bilic would be wary of the pace of Sterling and Aguero along with the defence-splitting passes of Silva and De Bruyne. The Hammers are likely to sit back a bit and press inside their own half with an aim to disrupt City’s attacking flow. 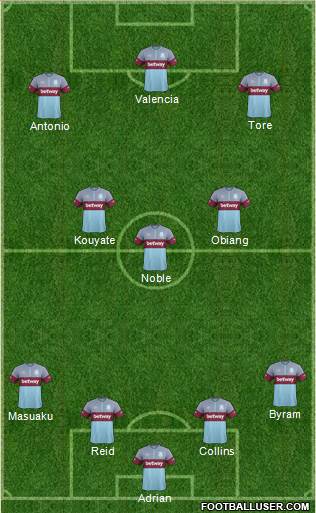 1. Manchester City have won only one of the last four Premier League games against West Ham, drawing one and losing two.

2. The Hammers had not won away to City after 2003 until last season, when they beat the Manchester Blues 2-1.

3. Sergio Aguero has a fantastic record against West Ham, scoring 7 goals and recording 4 assists in the 9 matches played against the Hammers (stats via transfermarkt).

4. West Ham have scored in 15 successive Premier League games – a record for this competition.

It is likely to be an enticing match as West Ham would be determined to bounce back from a disappointing loss to Astra in the Europa League qualifying campaign. City’s defence is yet to show a solid performance, something which could haunt Pep in this game particularly.

Manchester City under Pep Guardiola have conceded in both the Premier League games. West Ham, on the other hand, would be determined to prove to their fans that they are capable of emulating last season’s performance and are likely to provide a tough test for Guardiola’s men. But the quality of City’s side coupled with the injury struggles of West Ham is likely to mean a victory for Manchester City, albeit, narrowly.