Franck Kessie and Raphinha will return, but Robert Lewandowski is unavailable for the game between Barcelona and Viktoria Plzen on Tuesday.

Barcelona will hope to end the UEFA Champions League campaign strongly when they lock horns with Viktoria Plzen at Doosan Arena on Tuesday night. And Xavi Hernandez has a few pressing squad issues hampering his preparations ahead of his side’s latest fixture.

Sergio Busquets is unavailable due to a suspension, which he accrued last week for accumulating yellow cards. In addition, Eric Garcia and Jules Kounde are on the sidelines after sustaining injuries this past weekend against Valencia. But the major absentee for Barcelona is Robert Lewandowski.

The Polish striker is not in the travelling squad to take on Viktoria Plzen due to a minor back issue. Sergi Roberto, Andreas Christensen, Ronald Araujo, and Memphis Depay are the other absentees for Barcelona.

Marc-Andre ter Stegen has been ever present in the Barcelona goal this season. But the German international will make way for Inaki Pena between the sticks on Tuesday. The Blaugrana will line up in a 4-2-3-1 formation in front of Pena against Viktoria Plzen. Xavi Hernandez confirmed starts for Pena and Pablo Torre in his pre-match press conference. He also spoke about Lewandowski.

“Lewandowski has a minor discomfort. He was on the squad list for the match against Viktoria, but in the end we preferred him to rest. He’ll be fine for Saturday’s game. Inaki Pena and Pablo Torre will play tomorrow against Viktoria. We will give minutes to players who haven’t played so much so far.”

With Kounde, Araujo, Christensen, and Garcia all unavailable, Gerard Pique will pick himself for the starting lineup. And Marcos Alonso will likely start as a makeshift centre-back again, despite being a misfit in the position. Hector Bellerin is an automatic selection as the right-back, with Jordi Alba likely to pip Alejandro Balde on the left flank.

Franck Kessie will come in for the suspended Sergio Busquets in the middle of the park, with Gavi likely being his partner in the double pivot. Frenkie de Jong and Pedri will be options on the bench but will unlikely feature on Tuesday. 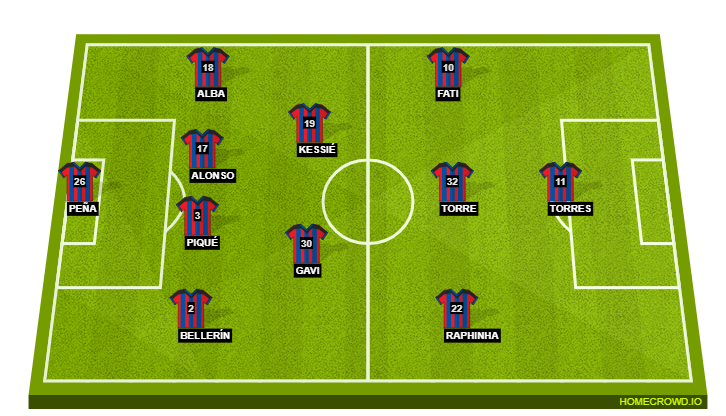 The formation change will accommodate Torre perfectly, with the teenage prodigy reprising the no. 10 role. Raphinha and Ansu Fati should be the two wide attackers, with Ferran Torres filling in for Lewandowski. Ousmane Dembele will thus get some much-deserved rest this midweek.