Cristiano Ronaldo will start again, while Raphael Varane will return when Manchester United and Sheriff Tiraspol face off on Thursday.

Manchester United will be desperate to get off the mark in the UEFA Europa League when they lock horns with Sheriff Tiraspol at the Zimbru Stadium in a Group E clash on Thursday evening. And Erik ten Hag has some pressing concerns hampering his preparations ahead of his side’s latest fixture.

The Manchester United manager has named a 25-strong squad to travel to Moldova to take on Sheriff Tiraspol. But Marcus Rashford is a notable absentee from the group, with the English international continuing to recover from a muscle injury he sustained in the game against Arsenal ten days ago.

Apart from Rashford, Aaron Wan-Bissaka has also missed the trip to Moldova, while Anthony Martial (Achilles) and Donny van de Beek (knock) continue to recover from their respective issues. During his pre-match press conference, ten Hag provided an update on Rashford.

The Manchester United boss said, “He is not available. It is still the [same] consequence after Arsenal. He has a muscle injury. I don’t think [he will be out] too long. It’s not really bad and we expect him back quite soon in the team.”

In Rashford and Martial’s continued absence, Cristiano Ronaldo will have another opportunity to make his mark. The Portuguese international will spearhead the Manchester United attack against Sheriff Tiraspol.

Meanwhile, Jadon Sancho will likely replace Anthony Elanga on the left flank, while Antony seems to have already made the right-wing berth his own. Bruno Fernandes will start behind Ronaldo, looking to orchestrate the play while likely donning the captain’s armband for Manchester United.

With the Red Devils set to return to action after the Sheriff Tiraspol game next month, ten Hag should name a strong starting lineup. But Christian Eriksen can do with some rest after heavily featuring in every game thus far. Fred will thus drop into the double pivot after reprising the no. 10 role last week against Real Sociedad.

Fred will join compatriot Casemiro in the middle of the park, with the summer signing getting another chance to establish a foothold at Manchester United. Meanwhile, Harry Maguire and Victor Lindelof might drop to the bench. 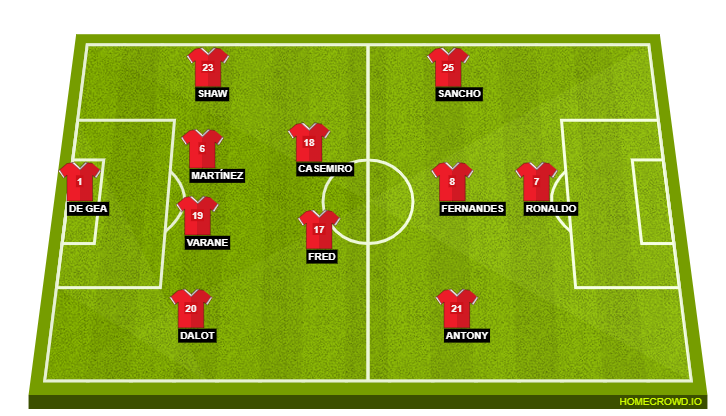 Raphael Varane and Lisandro Martinez will return to the heart of the Manchester United defence to form the central defensive partnership. Meanwhile, Luke Shaw might get a rare start, with Tyrell Malacia earning a breather. Finally, Diogo Dalot picks himself in the right-back berth, with David de Gea being an automatic selection between the sticks.