Predicted Liverpool lineup against Bournemouth: Fabinho in for Milner; Tsimikas to start

Fabinho and Kostas Tsimikas will return, but James Milner will drop to the bench when Liverpool and Bournemouth face off at Anfield on Saturday.

Liverpool will be keen to bounce back to winning ways when they play hosts to Bournemouth at Anfield on Saturday afternoon. And Jurgen Klopp does not have a fresh roster issue to contend with ahead of his side’s latest fixture.

But the Liverpool boss continues to be bereft of the services of ten first-team players due to injuries and suspension. Among the absentees, Darwin Nunez, Joel Matip, and Thiago Alcantara are the major absentees for the Reds against Bournemouth.

Klopp provided a positive update on several players during his pre-match press conference, saying, “This weekend probably not but after that Joel, Curtis, Thiago is not too far away, Diogo is getting closer, Caoimhin will be in training, I think, early next week as well.”

“So yeah, positive news but I don’t think anybody will be ready for tomorrow. Naby will not be ready for the weekend, of course not. We still need to have a look exactly how long it will take. It’s a muscle and it’s not 100 per cent clear, but [he] will not be in for the next week.”

Nunez’s continued absence means Roberto Firmino will spearhead the Liverpool attack against Bournemouth, even though he was abysmal earlier this week against Manchester United. Luis Diaz and Mohamed Salah pick themselves as the two wide attackers for Liverpool.

As for the midfield unit, Fabinho’s absence was telling against Manchester United, and the Brazilian international should sit at the base of the midfield for Liverpool. James Milner will make way for Fabinho, with Jordan Henderson and Harvey Elliott starting as the box-to-box midfielders.

Meanwhile, Andrew Robertson has looked jaded in the first few games of the 2022/23 season and might be due for a rest. Kostas Tsimikas is more than a worthy backup for Robertson and should start as Liverpool’s left-back against Bournemouth. 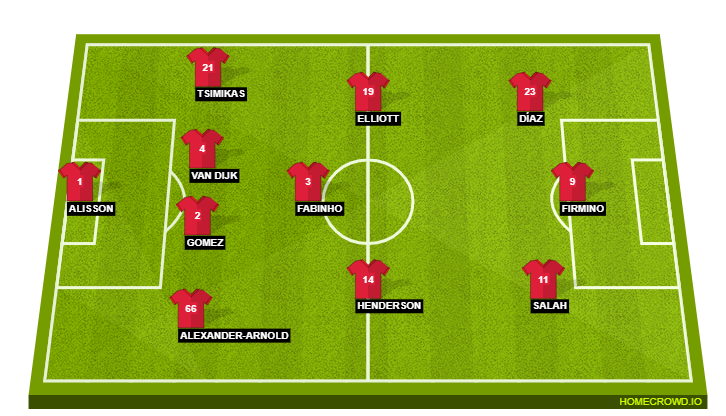 With Matip and Konate still on the sidelines, Joe Gomez picks himself as Virgil van Dijk’s partner at the heart of the Liverpool defence. Trent Alexander-Arnold and Alisson Becker will take up the final two spots in the team, with the former starting as the right-back and the latter taking his place between the sticks against Bournemouth.