Fred will replace Nemanja Matic, while Harry Maguire could feature when Manchester United and Brighton & Hove Albion face off on Saturday.

Manchester United will be eager to keep their fading UEFA Champions League hopes alive when they lock horns with Brighton & Hove Albion at the Amex Stadium on Saturday evening. And Ralf Rangnick has greeted a mixed bag of team updates ahead of his side’s latest fixture.

Harry Maguire has resumed training this week after recovering from a knee injury and will be in contention to feature against Brighton. Aaron Wan-Bissaka could also make it to the matchday squad after overcoming a knock. But Marcus Rashford is unavailable as he is suffering from bronchitis, while Eric Bailly could miss out due to a lower back injury.

Rashford and Bailly have joined Luke Shaw, Paul Pogba and Jadon Sancho on the sidelines, while Mason Greenwood remains suspended by Manchester United. Rangnick spoke about Maguire, Bailly and Rashford during his pre-match press conference.

“Harry is back in training. He trained the whole week, since the day after or the second day after the Brentford game, he resumed for training. So, he will be available for tomorrow and be part of the group. Edinson [Cavani] is in training, obviously he came on as a sub.”

“Marcus Rashford will be missing, he has caught bronchitis with high temperatures so he won’t be able to be part of the group. We have a question mark behind Eric Bailly, he called the doctor this morning and had some back problems – problems with his back – and he’s being checked right now. We’ll have to see if he will be able to train afterwards.”

Maguire will likely miss out on a spot at the heart of the Manchester United defence despite regaining fitness, with Victor Lindelof and Raphael Varane expected to form the central defensive partnership. Wan-Bissaka should be on the bench, too, with Diogo Dalot continuing as the right-back.

Alex Telles is an automatic starter in Shaw’s absence, while David de Gea picks himself between the sticks. The game’s only change could be on the cards, up ahead in midfield, with Fred likely to come in for Nemanja Matic. Fred will join Scott McTominay in the double-pivot, with Matic dropping to the bench. 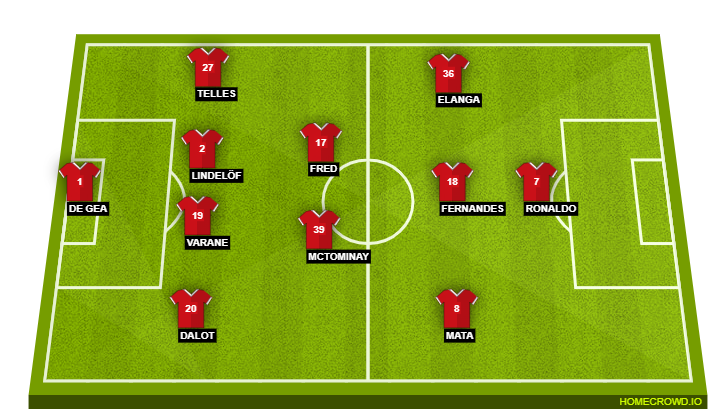 Juan Mata should keep his spot in the side after producing an impressive performance in his first Premier League start of the season against Brentford. Mata will join Bruno Fernandes and Anthony Elanga in the Manchester United attack, with Cristiano Ronaldo leading the line against Brighton.