Jordi Alba is fit and available while Ansu Fati is set to return when Barcelona welcome Real Madrid to Camp Nou on Sunday.

Barcelona will be hoping to continue their recent winning run when they play hosts to Real Madrid at Camp Nou on Sunday, in the first El Clasico of the season. And Ronald Koeman has been handed a boost on the team news front ahead of his side’s latest fixture.

The Barcelona boss had been sweating over the fitness of Jordi Alba after he sustained a minor foot injury earlier this week in the game against Dynamo Kyiv in the UEFA Champions League. However, the Spanish international is fit and available after finally resuming full training on Saturday.

During his pre-match press conference, Koeman was quizzed on a variety of topics, including the importance of El Clasico as well as the pressures that the game brings. On the team news front, he discussed Alba and Ansu Fati in particular.

Koeman said in his presser (h/t Barca Universal), “Alba trained normally and is ready to play. Ansu and Vinicius are two young players who still have to show a lot. Ansu must be allowed to recover in peace. Ansu can make a difference.”

Alba ought to continue on the left side of the Barcelona defence, having trained normally as per Koeman. On the opposite flank, though, Sergi Roberto could come into the side in place of Oscar Mingueza. Eric Garcia is back in the matchday squad after missing out against Dynamo Kyiv due to a suspension.

The 20-year-old should return to the starting lineup straightaway, partnering Gerard Pique at the heart of the Barcelona defence. In goal, there is no looking past Marc-Andre ter Stegen. Up ahead in midfield, Pedri continues to remain unavailable, meaning Gavi will combine with Sergio Busquets and Frenkie de Jong in the three-man unit in the middle of the park. 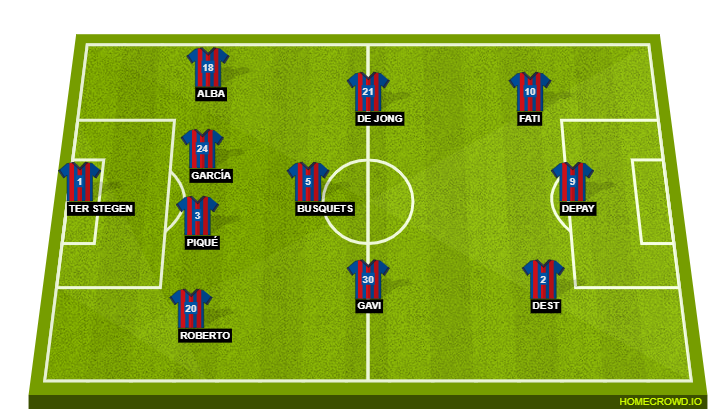 Finally, the attacking unit ought to see one final change, with Ansu Fati coming into the side in place of Luuk de Jong. Fati’s return should prompt Koeman to deploy Memphis Depay as the central striker, with Sergino Dest and Fati being the two wide men for Barcelona. Sergio Aguero will be an option off the bench along with de Jong.